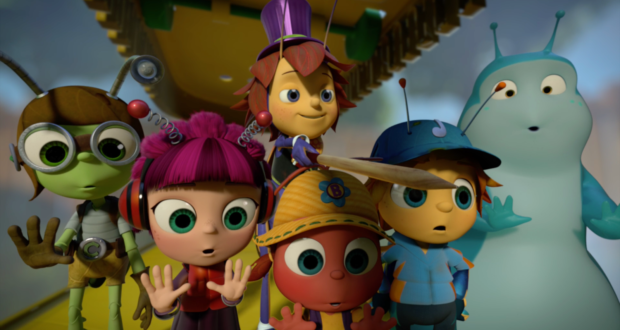 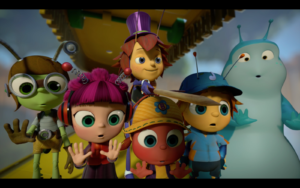 In a market in which turnaround times are often measured in weeks, it’s vital to manage production resources efficiently. One studio that knows this better than most is Vancouver’s Atomic Cartoons.

Since its foundation in 1999, the company has produced a series of hit episodic animated series for broadcast networks worldwide, winning a string of Leo and Annie Awards along the way.

And to get the most out of its 400-node render farm, Atomic relies on Qube!, PipelineFX‘s intelligent render management system, on productions ranging from Rocket Monkeys to the animated adaptation of an Angry Birds short – and now, on Netflix’s hotly tipped Beat Bugs, which aims to introduce a new generation of kids to the music of The Beatles.

From Beatles to bugs

Set in an overgrown suburban back yard, Beat Bugs revolves around five friends – Jay, Kumi, Crick, Buzz and Walter – as they band together to explore their environment. Iconic Beatles songs, including “Magical Mystery Tour”, “Come Together”, “Penny Lane” and “Lucy in the Sky With Diamonds” are woven into the narrative of each episode, in versions recorded by artists including Eddie Vedder, Sia and P!nk.
When first announced in February, the series, which is co-produced by Atomic’s parent company Thunderbird alongside Grace: A Storytelling Company and Beyond Screen Production, sparked stories in publications ranging from USA Today to The Wall Street Journal.

“Personally I’m very grateful to be part of Josh’s vision,” Eddie Vedder told Rolling Stone. “[Beat Bugs] is a tremendous show for kids that combines beautiful animation with great stories and obviously some of the best songs ever written.” 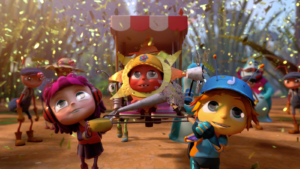 Atomic Cartoons is creating the 3D animation for Beat Bugs in Maya, with NUKE used to composite the render passes. The studio estimates that it has worked on over 10,000 shots for the series, comprising more than 100,000 individual frames – some taking just 2 hours to render.

To ensure that it made optimal use of resources during such intensive work, the studio relied on Qube! to divide rendering jobs between the 400 render nodes available for the show.

“I was introduced to Qube! by one of our software vendors,” says Rachit Singh, Atomic’s Head of Technology. “What got me interested was just how easy it was to set up.”

For Singh, a crucial benefit of Qube! is the option to define custom job types – essential in a studio like Atomic, which uses its own proprietary asset-management system alongside off-the-shelf production-tracking and playback tools like Shotgun and RV. The studio also uses Flash, Harmony, and After Effects on its 2D animated productions, all of which require their own custom job types.

“Even the built-in job types are great out of the box,” says Singh. “But as these job types are constructed as open architecture scripts, they can be customized to fit the studio’s pipeline needs.”

Another important feature of Qube! is its ability to centralize the management of the render farm, including both the configuration of render nodes and the logging of render jobs.

“Having the ability to manage the farm from one central location is amazing,” says Singh. “It saves so much time in implementing new configs and debugging problems. With the logs being in one location, we can have them on a central storage system so they are accessible from anywhere and have no performance impact on the supervisor.”

Qube! also informs Atomic’s decision-making process, with the studio using the information it generates to plan the rendering budget needed for demanding projects like Beat Bugs.

“After each show, we look at the database to figure out what our average render times were, and how well we made use of the machines,” says Singh. “This helps us figure out what we need for our next production in terms of render power.” 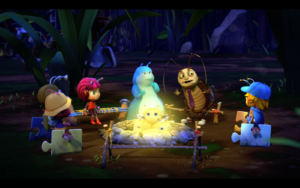 Thanks to Qube!’s combination of customizability and centralization, Atomic Cartoons is able to deliver shows like Beat Bugs on time and on budget, even under the tight schedules required for episodic broadcast animation. Singh notes that the support the studio receives from PipelineFX also plays an important role in its ability to manage productions efficiently.

“We use support on a regular basis, not just for bug fixes, but for getting clarification on workflow best practices,” he says. “Qube! support is great – the engineers are very knowledgeable.”

Although Atomic has tested other render farm management systems, Singh says that Qube!’s power and ease of use are hard to beat. “Qube! was one of the first render managers I used,” he says. “But even though I’ve tried other alternatives since then, I’ve always come back to it.”

Beat Bugs debuted on Netflix around the world on August 3rd. In Australia, the series premiered on Seven Network. Watch the trailer at bit.ly/beatbugstrailer.

About Qube!™ and Smart Farming™

Qube! is an intelligent, mature and highly scalable render management solution that can be quickly integrated into any production workflow, and is backed by world-class technical support. Smart Farming delivers intelligence to production pipelines by providing business-critical insight into render pipelines, maximizing investment in rendering infrastructure and automating manual processes. Qube! works out of the box with all leading content creation applications and is truly cross-platform with all software components available on Windows®, Linux®, and Mac OS®X operating systems.

Atomic Cartoons is an award-winning full-service animation studio located in Vancouver’s busy Animation District that creates, produces and finances animation for distribution across multiple channels. Atomic is an artist’s studio that is home to some of Canada’s most creative animators, directors, producers and writers. Adept at multiple genres and animation styles, Atomic is recognized internationally as one of the leading animation studios in North America and has a track record of success with its homegrown shows, includingBeat Bugs and Atomic Betty, which has been seen in more than 180 territories and garnered worldwide kudos at the Annie, Leo, CSA and BAFTA awards. Atomic is a part of the Thunderbird Entertainment Group, a film and television production company currently working on the Blade Runner sequel.
www.atomiccartoons.com