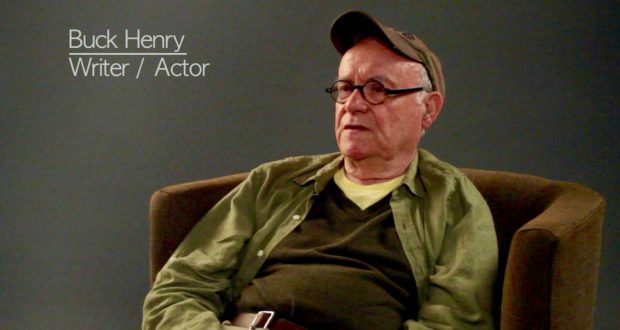 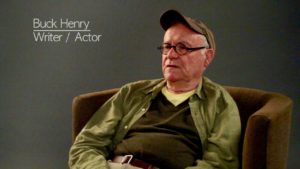 The American television industry has lost one of its most talented and wittiest writers. This Wednesday, Buck Henry, the multi-talented writer, producer, director, and actor passed away at age 89.

Henry is well-known for his contributions to motion pictures, especially his Oscar-nominated work on Mike Nichols’ The Graduate (1967), for which Henry co-wrote the screenplay with Calder Willingham, and Heaven Can Wait (1978), a remake of the 1941 classic fantasy-comedy Here Comes Mr. Jordan, which Henry co-directed with star Warren Beatty as well as playing a supporting role.

It was, however, Henry’s writing for television where he first established himself as a major talent, his most notable small screen achievement being the co-creator (with Mel Brooks) of Get Smart, a slapstick parody of the spy movie craze that followed in the wake of the early James Bond pictures. As a TV performer, he is perhaps best remembered for his appearances as one of Saturday Night Live‘s regular guest hosts.

Born Buck Henry Zuckerman, the son of an Air Force general and a silent screen actress, Henry got his first TV gig in 1961 writing for The New Steve Allen Show, a comedy-variety series. He also made his first on-camera appearance on that show in a skit where he played one-third of a folk-singing group called the Beta Alpha Delta Trio. (The other two-thirds were Tim Conway and Jim Nabors. The sketch was a take-off on the Kingston Trio.)

His subsequent TV writing gigs were for The Gerry Moore Show (1963-64) and That Was the Week That Was (1964-65). The latter was an Americanized version of the popular British series of the same name that specialized in satirical skits about current affairs done in the style of a network news show, a predecessor of the type of irreverent, anti-Establishment humor that would also play a part in the creation of Get Smart, Henry’s next writing job.

Under the supervision of executive producer Leonard Stern, Henry and Mel Brooks wrote the pilot script for Get Smart as a vehicle for basset hound-faced comedian Tom Poston (perhaps best remembered today as handyman George Utley on the popular sitcom Newhart). But, through a series of circumstances, stand-up comic Don Adams wound up being cast as bumbling secret agent Maxwell Smart. In a 2015 interview for KDOC-TV in Los Angeles, Henry recalled the events that led up to Get Smart‘s creation.

“Danny Melnick ran the production entity of the [David] Susskind company, and one day he called me in. He’d already called Mel in, and [in] a beautiful example of ‘bottom line,’ he said to me, ‘Have you noticed the two huge hits wandering around the world out there in the film business are [James] Bond and [Inspector] Clouseau? Get the picture?’ Yeah, I get the picture. Written under a contract with ABC, and as soon as ABC got it, they asked for rewrites, and then they asked for more, and then they said, ‘We can’t impose this kind of stuff on a family having dinner in their homes.’ I think they thought it was sort of anti-American…

“Someone—this is the legend—was going up the steps of the Beverly Hills Hotel, carrying the pilot script, and Grant Tinker [then head of West Coast programming for NBC] was walking down the steps, and he said, ‘Whadaya got?’ ‘We’ve got this pilot for a funny guy.’ Grant Tinker took it and said, ‘Hey, [we’re] lookin’ for a show for Don Adams,’ and it was odd because everyone assumes the fit had already happened. Barbara [Feldon, Agent 99] was easier; she’d been around on television, so we knew her, and I knew that she was really good. We loved Ed Platt [the Chief], a wonderful character actor, and he was a sweet and gentle soul…

“Maxwell Smart is Mel’s, 99 is mine, the Cone of Silence is mine—it never worked; it was a triumph of misdirection—shoe phone is Mel’s, the framing story [the opening credits sequence with Max walking down a long corridor through a series of mechanical doors] is completely Leonard Stern—it’s maybe, I think, one of the greatest framing devices ever used in television comedy.”

Henry stayed on as Get Smart‘s story editor, and he and Stern won an Emmy for co-writing the two-part episode “Ship of Spies.”

Henry tried to duplicate the success of Get Smart by creating and producing two more satirical sitcoms, but unfortunately neither of them caught on with TV viewers. The first one Captain Nice (1967), starring William Daniels in the title role, was meant to do to comic book superheroes what Get Smart did to the spy genre. It only lasted half a season (13 episodes). Henry’s next sitcom Quark (1978), a parody of Star Trek, did even worse; it only lasted seven episodes.

Outside of Get Smart, Henry’s best-known TV credit was appearing 10 times as the guest host on Saturday Night Live during the series’ first five seasons (1975-80), which many fans still consider the show’s funniest years. Movie audiences were already aware of Henry due to his brief supporting parts in films like Mike Nichols’ The Graduate (1967) and Catch 22 (1970), as well as his one and only leading role in Milos Forman’s Taking Off (1971). It was those SNL guest host gigs, however, that make Henry a familiar face with television viewers. His dry, deadpan comic delivery proved that he could be just as funny a performer as he was a writer. His SNL gigs also solidified his creds in the counterculture humor movement which, thanks mainly to the Firesign Theatre and National Lampoon, spread like wildfire among American teenage audiences in the early 1970s.

The third of Henry’s SNL appearances featured one of the most memorable mishaps in the history of live television. When hosting, Henry usually did a sketch opposite John Belushi’s samurai character. (The joke was that Henry always responded to Belushi’s Japanese-sounding gibberish as though he understood every word.) In an Oct. 1976 sketch called “Samurai Stockbroker,” Henry’s client finds his life savings wiped out due to bum stock recommendations from Belushi’s samurai, and laments that the office doesn’t have a window for him to commit suicide by jumping out of. Belushi obliges him by cutting a hole into the office’s wall with his sword, accidentally nicking Henry on the forehead in the process. As if that wasn’t bad enough, the impromptu window’s frame collapsed as Henry was climbing through it, cutting open his leg as well. Ever the professional, Henry continued through the rest of the program as if nothing happened, albeit with a bandage attached to his brow.

The sketch appeared early enough in the show that, when Chevy Chase did the “Weekend Update” segment, he adlibbed a news flash about Henry’s injuries. By the end of the broadcast, the rest of the cast and all of the musicians were sporting bandages on their heads in solidarity during the curtain call and end credits.

Henry’s final contributions to a TV comedy sketch series came in 1984 when he signed on as a writer and cast member of The New Show, which was SNL producer Lorne Michaels’ attempt to create another satirical, off-the-wall comedy series in the tradition of Saturday Night Live, featuring performers who’d previously starred on SNL and SCTV. Despite being an absolutely hilarious series, The New Show, alas, didn’t fare any better than Captain Nice and Quark, and only lasted nine episodes.

Until recent years, Henry continued to make guest appearances in several TV series. One of the creepiest roles he ever played was in a particularly morbid 1992 episode of the horror anthology Tales from the Crypt called “Beauty Rest.” Henry played the MC of a beauty pageant won by a has-been actress (Mimi Rogers), who learns too late that the prize is to be embalmed, autopsied, and put on display at a coroners’ convention. Henry also turned up in TV shows like Will & Grace, Hot in Cleveland, Law & Order: Special Victims Unit, Franklin & Bash, and 30 Rock (as Tina Fey’s father).

Rest in Peace, Buck Henry. You will be greatly missed, especially by Baby Boomer comedy fans.

Latest posts by Doug Krentzlin (see all)
R.I.P., Buck Henry: An Appreciation
&nbsp; Buck Henry (source: Archive of American Television) The American television industry has lost one of its most talented and wittiest writers. This Wednesday, Buck Henry, the multi-talented writer, producer, director, and actor passed away at age 89. Henry is well-known for his contributions to motion pictures, especially his Oscar-nominated work on Mike Nichols' The Graduate (1967), for which Henry co-wrote the screenplay with Calder Willingham, and Heaven Can Wait (1978), a remake of the 1941 classic fantasy-comedy Here Comes Mr. Jordan, which Henry co-directed with star Warren Beatty as well as playing a supporting role. It was, however, Henry's&hellip;

Doug Krentzlin is an actor, writer, and film & TV historian who lives in Silver Spring, MD with his cats Panther and Miss Kitty.