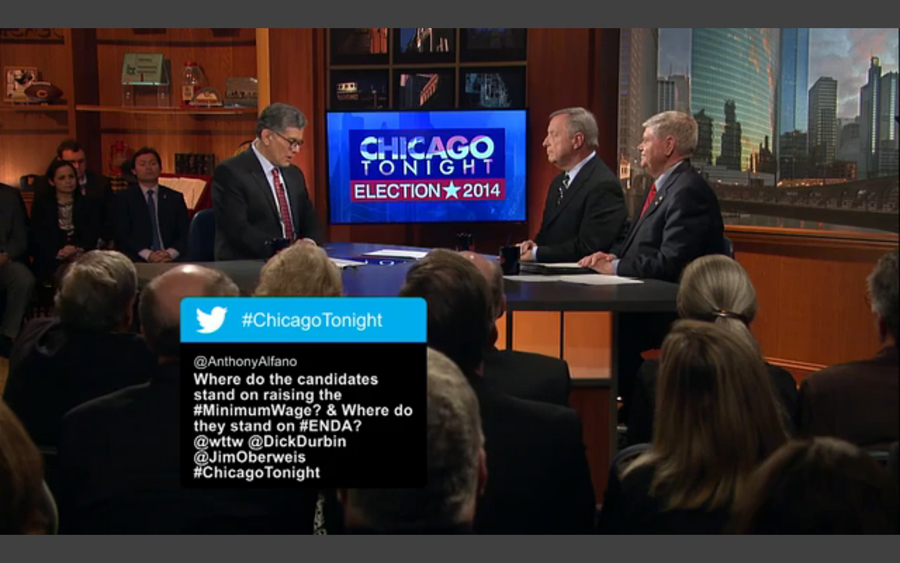 Ahead of the 2014 US midterm elections, Reality Check Systems (RCS) collaborated with the government and elections team (@gov) at Twitter to customize one of RCS’ Twitter Bullet mobile graphics workstations for use in the broadcast of Chicago Tonight’s 2014 U.S. Senate Candidate Forum by local Chicago Affiliate WTTW11 (@wttw). Together on October 29, 2014 at 7:00pm CDT, Twitter and WTTW11 deployed the system to curate and air Tweets throughout the hour-long debate broadcast as dynamic graphics, bringing audience hashtags and conversations to life on-screen as they unfolded in real-time. “Social media has revolutionized the way our country thinks and talks about elections; it’s given voters a platform to not only voice their opinions, but also to have their voices heard. We’re exited to see our Twitter Bullet a part of that,” shared Jeff Heimbold, VP of Business Development, RCS. “Collaborating with Twitter on this project has been an amazing experience, and we look forward to seeing what they’d like to do next with the system for the 2016 election.” “Introducing live tweets to a broadcast like this allowed WTTW to capture the voices of voters at home in real-time and command calls to action that not only benefited the candidates, but also voters, parties and more,” added Sean Evins, Partnerships Manager, Government & Elections, Twitter. “The more we integrate Twitter into the fabric of election conversations like these using tools like RCS’ Bullet system, the better.”

Reality Check Systems (RCS) ignites on-air viewing experiences for some of the most-watched sporting, eSports and entertainment events on television. With offices in Burbank, CA and London, RCS has partnered with the world’s leading sports leagues, federations, networks and social media giants since 1997 to fuel audience engagement through a customized fusion of dynamic graphics, real-time data and social media. To give shape to each client’s unique vision, RCS develops sophisticated graphics and production systems that can be seamlessly deployed in a wide array of professional environments. www.realitychecksystems.com