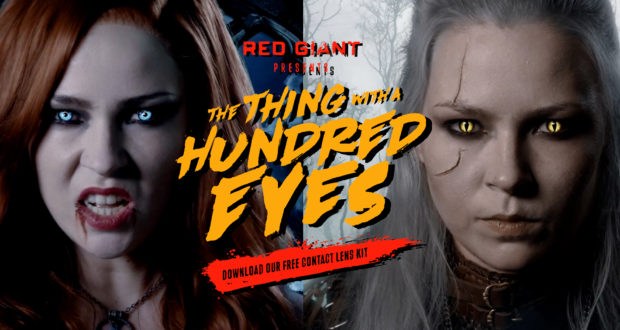 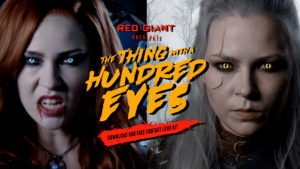 The Thing with a Hundred Eyes: Latest visual effects tutorial on Red Giant YouTube shows viewers how to how to give actors the creepiest and coolest eyes based on characters from Hollywood film and TV.

Portland, OR – October 10, 2019 – Red Giant is ready for Halloween with their latest tutorial: The Thing with a Hundred Eyes, a spooky new VFX how-to out now on YouTube. Created by Red Giant’s Lead Designer Leo Hageman, the short video walks viewers through how to use Red Giant’s free digital contact lens project file featuring a hundred different eye presets, based on characters from Hollywood movies and TV shows, including Storm’s changing eyes in X-Men, dead zombie eyes from The Walking Dead, the infamous ice blue eyes of the Night King of Game of Thrones, and more from The Mummy, The Witcher, Dune and plenty of others. Leo covers the tools in VFX Suite, Magic Bullet Suite and Universe, from how to track objects in an instant or add just the right amount of glow for a creepy effect, to renoising footage for the perfect horror movie look.

Watch Now: The Thing with a Hundred Eyes

Grab the project files on the tutorial page here. NOTE: there are two versions of the project file. One that uses only native effects in Adobe AE CC2019, and a much cooler enhanced version that uses VFX Suite and Magic Bullet Suite.

In this tutorial, Leo uses the following tools from Red Giant: