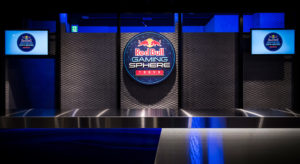 Through the space, which has held more than a 100 events since opening, Red Bull offers a place where gamers can fight face to face. The Red Bull Gaming Sphere Tokyo is Red Bull’s first gaming space in Asia and includes community space for players, developers and publishers to build gaming scenes, with gamers gathering together for tournaments and other events.

To capture game play, three Blackmagic Studio Camera 4K are used to shoot commentator and players 1 and 2. Feeds from these cameras and images of game screens are sent to the ATEM Production Studio 4K for live switching. The final output switched by the ATEM Production Studio 4K is then distributed live and recorded by HyperDeck Studio 12G. Video of the game itself is sent before switching from the game machine to a Blackmagic Design Video Assist 4 K for recording and monitoring of the game screen.

Five Micro Studio Camera 4Ks are installed on the ceiling to capture the entire set of play and sent to a large monitor for live audience viewing at the event hall.

Masahiro Yamana, assistant of Groovesync, inc. said, “After importing the base of the scoreboard to the ATEM Production Studio 4K’s media player, I can combine it in a chroma key with green screen material, such as numbers created in real time. Also, when it comes to a big event, I find the ATEM Production Studio 4K’s SuperSource feature very useful. Since SuperSource enables you to create an image arranging up to 4 sources and a background, I can composite pictures of the players’ face on the game screen. When streaming a gaming match, this type of layout is popular, and ATEM 2 M/E Production Studio 4K is essential in a major gaming event.”

“All equipment that carries out events such as cameras, switchers, recording equipment, etc. are prepared, and the gamer hosting the event operates the equipment. Most gamers have never touched professional quality equipment. In teaching gamers live streaming and knowledge of equipment, Blackmagic products that can be delivered with professional quality while being simple in operability was very compatible with our needs. I hope that from the project of Red Bull Gaming Sphere Tokyo, the Japanese gaming scene will be more exciting,” Mr. Matsui concluded.