Rise, the award-winning advocacy group for gender diversity in the media technology sector, has announced the recipient of the 2022 Woman of the Year award. Daniella Weigner, co-founder and Managing Director of Cinegy GmbH, will receive her award during the Rise Awards 2022 ceremony, which will be held on Wednesday the 30th of November at BT Sport Studios, Stratford, London. The ceremony, held in partnership with BT Sport and Timeline TV, will also be streamed live on the Rise YouTube channel.

The Woman of the Year, sponsored by Zixi, is selected by the global Rise Advisory Boards and presented to an extraordinary and inspirational woman who has made a significant contribution within her field. The Award is open to any woman from across the sector, at any level, anywhere in the world.

British-born Daniella Weigner is co-founder and Managing Director of Cinegy GmbH. Daniella has helped to create a company that puts family at its heart and her compassionate leadership proved invaluable to staff when the Ukraine war broke out. Under her guidance, Daniella and members of the Cinegy management team travelled to Ukraine to bring staff and their families back to Munich. Together with Sonya Chakarova and Phillip Covell, she brought together more than 400 broadcast and media companies and individuals to provide resources, solutions and hardware to Ukrainian TV channels and media outlets to ensure they could stay on air amid ongoing conflict. Their initiative continues to support refugees in finding media roles across Europe. 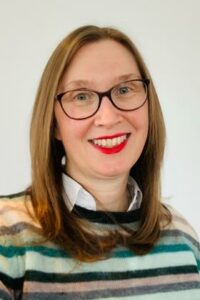 Daniella Weigner, said: “I am honoured to have been awarded the Woman of the Year by the board of Rise for Women in Broadcast. To simply be nominated in the category for Business was amazing enough and then to learn that I have been given the Woman of the Year award is beyond words. I am in the company of so many inspiring women in an amazing industry and so am very grateful to be recognised by Rise, especially for its acknowledgement of the importance of looking after our team which was severely impacted by the war in Ukraine.

“As a company, Cinegy has always put family at its heart and so ensuring the safety of our research and development and sales support teams located in the area was a top priority for us when the hostilities started. I hope that this award helps shine a continuing light on the plight of our friends and colleagues fighting and surviving in Ukraine, for those waiting to return to their homeland and it is on their behalf that I am extremely humbled and proud to accept this Award.”

Student of the Year Award sponsored by SMPTE

The winner of this year’s Student of the Year award category will also be announced during the ceremony and the shortlist is as follows:

Carrie Wootten, Managing Director of Rise, said: “It is such an honour to announce Daniella as this year’s Woman of the Year. This award is a true testament to her compassion for others, her contribution and her incredible work to support staff and their loved ones caught in the conflict. Daniella is truly an inspirational role model for us all.”

For more information about Rise and the Rise Awards, please visit: risewib.com/awards/