Hebden Bridge, 10th March 2021 — Radio Television Malaysia has undertaken a major upgrade of its regional station, PerlisFM, located in the northern Perlis state of the country, installing six Calrec Type R for Radio consoles as part of a significant move to a modern studio and to implement a new IP audio network infrastructure. The facility is now the reference for all future upgrades to RTM’s other regional stations. 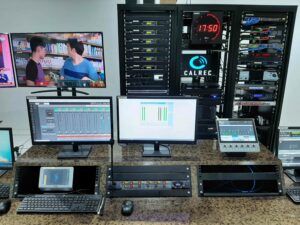 RTM has welcomed the ease of use of the Type R for Radio console. It highlights its motorised fader capabilities and touch screen panels which provide clear, single touch operation by the stations DJs — as well as the high level of customisation, alongside its native IP structure.

The project was completed and overseen by Calrec’s Malaysia distributor, JAA Systems, with VME Broadcast acting as the main contractor and Medialab Alliance as the system integrator.

David Chan, Director at JAA Systems, said, “We are very honoured to be part of this transformation of RTM’s radio infrastructure, which places it at the cutting edge of modern radio. Calrec’s Type R for Radio is perfect for this installation. Perhaps the biggest challenge that we faced during this installation was adhering to strict Covid 19 rules. We knew that any infection at all could have meant shutting down the facility for sanitisation plus quarantining all personnel and that had to be avoided at all costs. We believe that this IP installation points to the future of radio across Malaysia and beyond. We’d also like to say a big thank you to RTM for the trust in Calrec Audio and us at JAA Systems.”

Robert Davidson, Regional Sales Manager, Calrec, said, “We are very excited that our technology has been installed as a key part of such an important and bold move. Type R for Radio was designed to support this type of project, so we’re pleased that its simple-to-use and highly configurable interface is helping DJs to do their job in a way that suits them.”