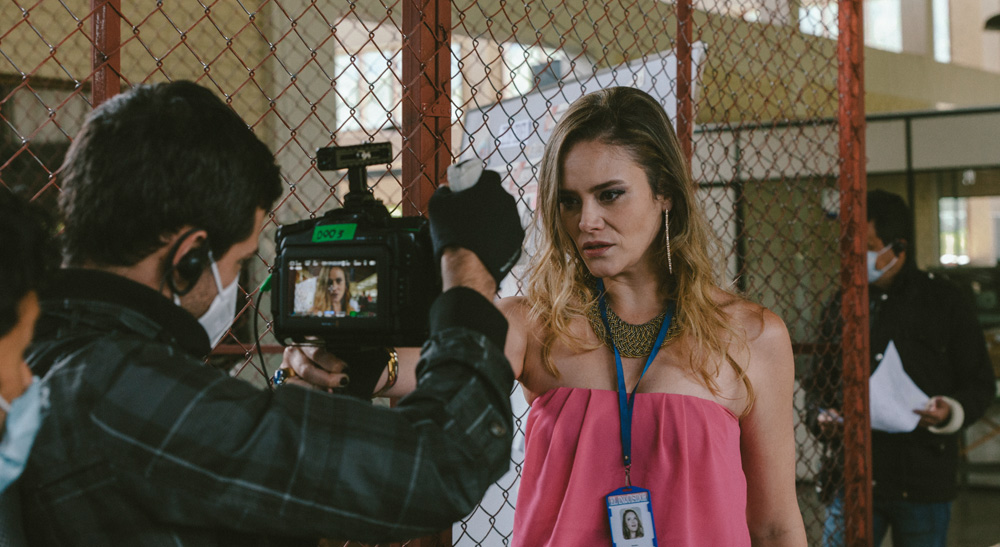 The series follows a young writer, Andrés Erazo, who investigates the murders of missing women throughout the city in the newspaper “El Inquisidor.” In the interactive mode, viewers can help Andrés solve the crime by taking on the role of an investigative journalist. By clicking on objects, finding hidden clues and solving puzzles, users can unlock levels and access exclusive content throughout the course of the series.

DP Ruben Fernández relied on six Pocket Cinema Camera 4Ks noting, “The camera’s affordability allowed us to include more units in our workflow and configure each for a specific function.” This helped the team capture as much content as possible, a necessity for the interactive series. For example, several Pocket Cinema Camera 4Ks were used as helmet cams to capture the characters’ perspectives that the viewer could then navigate.

“Time is of the essence when you’re capturing so much content to support an interactive show,” said Fernández. “Because the affordability provided us with so many cameras, our directors were able to focus more of their time on set, rather than waiting for the camera department to break down one setup to put together another.”

“I was especially impressed by the Pocket Cinema Cameras’ superb low light performance,” he added. “This crime drama features a lot of shadow and low light situations, and the camera’s ability to record Blackmagic RAW helped specifically when it came time for post.”

Fernández and his team also took advantage of the Pocket Cinema Cameras’ compact size, as production often placed the cameras in awkward or difficult positions, for example during complex car chase scenes. For these scenes in particular, the team relied on the Pocket Cinema Camera 6K Pro and its built in ND filters, which kept the setup extremely compact and minimal without sacrificing on the look or quality of the footage.

“We didn’t want to use external filters or matte boxes on a moving car rig,” Fernández explained. “The Pocket Cinema Camera 6K Pro’s built in ND filters allowed us to quickly change the amount of light entering the camera, all without the extra gear.”

For editing and color grading, Valencia Producciones relied on DaVinci Resolve Studio. “It was incredibly helpful to have so many tools in just one software,” said Fernández. “We didn’t have to jump from one program to another to get things done.”

He continued, “We took huge advantage of the collaborative workflow in DaVinci Resolve Studio as it enabled our editors to work on the same project, at the same time. This helped our concept editors, directors and producers have much shorter response times and move the project along quicker.”

DaVinci Resolve Studio’s cut page also proved beneficial as it allowed the team to quickly trim, zoom in, sync bins, preview and more. Regarding color grading, Fernández said, “We really enjoyed having the ability to group clips and make general adjustments easily and quickly. We were able to get our job done and move on to the next scene without a hassle.”

Fernández concluded, “From filming to editing, our Blackmagic Design workflow helped us during every step of making ‘El Inquisidor.’ We just got nominated for Transmedia Project at the Premios TAL, which recognize the best in Latin American television, and we couldn’t be more excited. This shows the incredible results we’ve been able to achieve with this project and the warm support we’ve gotten from the public.”