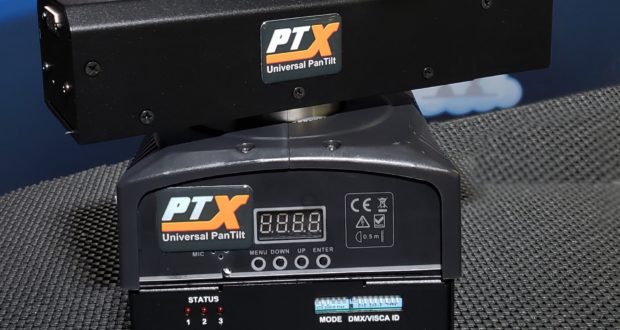 Flower Mound, TX – February 10, 2020 —RUSHWORKS, provider of cool technology for production, playback and streaming since 2001, will be demonstrating additions to its core solution series at NAB 2020 that will offer easy-to-operate, affordable systems to a broad cross-section of markets including Broadcast, Houses of Worship, Education, Government, Legal and Sports. The Company has revealed plans to introduce its latest generation pan/tilt head, a servo zoom control system, robotic dolly camera platform, affordable prompter and a turnkey portable production system. RUSHWORKS will also display the PTX Model 2, VDESK, VNEWS and VDEPO in Booth SL7406.

RUSHWORKS Puts the PTX Model 1L in the Spotlight

RUSHWORKS will showcase the new PTX Model 1L PanTilt head that includes a more powerful tilt motor and a larger L-shaped tilt platform. The latest in the PTX series allows expanded compatibility with wider and heavier camera/lens combinations, including DSLR and mirrorless bodies like the Sony Alpha series and the versatile RX10 IV “bridge” camera with a 25x optical zoom lens.

The BABYZOOMER kit allows operators to use a wide range of non-power zoom lenses from several manufacturers on the cameras of their choice.

“The lack of power zoom lenses with large, constant apertures has been frustrating for many of our PTX pan/tilt head customers,” said Rush Beesley, RUSHWORKS president. “Since the demand for power zoom control has steadily increased over the last three years, we decided to give people exactly what they’ve been asking for. BABYZOOMER is definitely a game-changer!”

BABYZOOMER is the ideal match for RUSHWORKS PTX Model 1L, a versatile unit that accommodates a wide range of camera weights and balances, including the increasingly popular use of DSLR and mirrorless cameras for video production, but the kit also works well with RUSHWORKS PTX Model 2 for larger cameras like the URSA Mini, Canon, and many more. BABYZOOMER is particularly useful with the Blackmagic Micro Studio Camera 4K that needs light levels achieved with apertures of f2.8 and below.

The small and lightweight RUSHDOLLY, which is great for both studio and remote operations, is now fully integrated with RUSHWORKS VDESK, REMO and Ctrl+R Production Systems. It features a new, simple interface that supports the creation of up to eight static or motion presets with sophisticated ramping and preset delay parameters. You can even select a mounted PTZ camera to automatically stay centered on the object or person in the shot as the dolly travels from the Start to the Stop position.

Keeping it simple but effective, RUSHPROMPTER includes the basic features people want and need for script creation and prompting. In Beesley’s words, “No more. No less.” These include RTF and TXT creation, export and import, find and replace, real-time font size adjustment, variable line spacing, and individual character control of bold, italics, underline, colorize, and highlighting.

“We designed the operation and interface for ease-of-use, versatility and cost-effectiveness. I think people will immediately recognize the benefits when they download the trial version and give it a go,” Beesley commented.

RUSHWORKS has also created a lightweight, inexpensive prompting stand that supports one or two 12” 16:9 monitors for displaying the prompter text as well as any video switcher program output. Information is available on the Website (www.RUSHWORKS.tv) where RUSHPROMPTER can be downloaded with a free trial period and purchased through PayPal for $99.

The software, which also powers RUSHWORKS VDESK and Ctrl+R solutions, includes a video and audio mixer with transitions, PiP and double-box effects and Chroma-key. It features a fully searchable File Browser for all media, and the ability to create multiple playlists for different events. It supports up to four NDI inputs and one NDI output, records the Program, and can output NDI and stream to popular sites such as Facebook Live and YouTube Live.

“NDI connectivity has transformed traditional wiring requirements into a few CAT5 cables that carry video, audio, PTZ camera protocols and power”, says Beesley. “We put more power and functionality into a couple of cases than you’ll find in most OB (Outside Broadcast) vans … at a fraction of the size, cost and operational complexity.”

VNEWS, the Company’s turnkey integrated production system “in a box” that includes all the hardware and software necessary, turns one person into the producer, writer, director, technical director and talent of a news program or entertainment show.

RUSHWORKS’ VDEPO meets the needs of those specializing in the production of on-location video depositions and courtroom support. It provides PiP support, ISO recording of inputs, streaming output, zooming and annotation, document and clip search and playback, and real-time speech-to-text transcriptions and file syncing. Lightweight and small, it’s optimized for quick setup and noiseless touch-screen operation.

The Company’s A-LIST BROADCAST Automation System, found in many of the world’s most recognized television facilities, provides all the features needed for 24/7 automation and supports SD and HD on up to FOUR independent channels. The OTT-only configuration, the A-LIST Streamster, will also be featured in the booth.