RUSHWORKS to Expand Portfolio of Production Solutions at NAB2016

The PTX Universal Pan/Tilt head is something the company is particularly excited about. “Now a producer can take a camera ‘where no camera has gone before,” says Rush Beesley, President of RUSHWORKS  with a grin.“Being able to use virtually any of the new cameras, including DSLRs, with a pan and tilt robotic head opens a whole new universe of possibilities … especially since we support DMX control.”

REMO UBEREMOTE is a small, ruggedized PTZ production and streaming configuration with a 17” touch screen interface. With four analog or SDI inputs, it’s designed for the rigors of field production. A lot of power and performance is packed into this tiny chassis, with a price point of just $7,995.

“With the dramatic rise in remote content production from all sectors, we’ve enhanced the ability to set up and strike very quickly,” said Beesley. “REMO UBEREMOTE is tiny and lightweight, so you can throw it in the back seat or carry it on the plane. But the included and sophisticated PTZ camera control remains our singular strength.”

REMO ISOTOWER provides up to eight inputs and a 17” touch screen, with plenty of “horsepower” to record both the switched program and up to six ISO camera inputs. It’s configured in a ruggedized aluminum chassis with carrying handle, and a snap-on trolley with wheels and extension handle.

Both REMO UBEREMOTE and REMO ISOTOWER include all three of RUSHWORKS’ production interfaces: CLASSIC, PRODUCER and TalkingPoints™, providing a level of versatility and flexibility unmatched in the industry. The software engine includes on-screen display of all input sources, Preview and Program windows, DSK window, virtual switcher display, and over a dozen video transitions and effects such as Picture-in-Picture, Double-Box and Chroma-key. 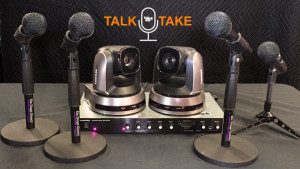