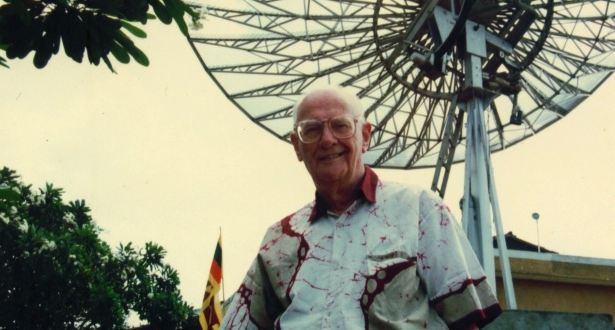 Not too many left who could vouch for 1945 being an eventful year – it saw the end of the most massive global conflict the world has ever known; the longest-running U.S. President ever Franklin Delano Roosevelt (our 32nd president) passed into eternity and was succeeded by his Vice President Harry S. Truman; the United Nations was proposed and established by October of that same year and, finally, Arthur C. Clarke, noted inventor, physicist, underwater explorer, and science-fiction author, correctly predicted the advent and main use of man-made satellites.

Mr. Clarke went on become one of the top three Science-Fiction writers of his era and also successfully predicted the advent of cell phones and GPS in 1956. He was knighted for his civil and scientific accomplishments in AD 2000, and passed away in 2008. He made his satellite prediction in the British-owned science magazine Wireless World as a letter to the editor. You can take a look at it with this link: lakdiva.org/clarke/1945ww/1945ww_feb_058.html. 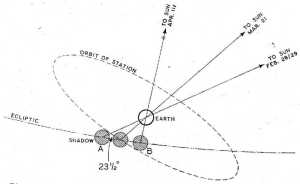 Clarke actually made 2 letters that year: one that he sent to the magazine and a second much more detailed letter that saw some limited circulation. Originally, the satellite notion bore much more resemblance to a space station. It was supposed to have an onboard staff and would also serve as a refueling stop for rockets as well as its communications applications. He predicted the advent of satellites in about 50 years, but it happened much faster than that; however, there was no provision for its use in assisting spacecraft as he had suggested. The concept of geo-stationary satellites (or orbs that stay in one place and follow the Earth’s rotation) wasn’t original to Clarke; he was building on the work of Konstantin Tsiolkovsky.

The Russian Satellite Sputnik achieved orbit in late 1957. Just 4 months later, in early 1958, the U.S. also had a satellite (the Explorer I) in orbit. In 1959, the U.S. Navy launched the first weather satellite: the Vanguard 2, which did not work out quite as well as anticipated but was followed a little over a year later in 1960 by TIROS 1, which had the same purpose as its predecessor; that same year, the first communication satellite, the Echo, was launched. The Echo was a passive satellite; it was just something to bounce signals off of. 1962 saw the launch of the first two active communications satellites: the Relay and the Telstar. In 1964, the first geo-stationary satellite, the Syncom 3, was launched. In recent years, the number of satellites in orbit has hovered at around 1000 or so. But only a very few military satellites are authorized for extreme close-up pictures of the earth.

The largest artificial satellite (that we know of (cue dramatic music)) is the International Space Station. Not including the current ‘crop’ of satellites 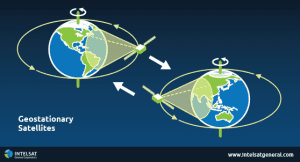 launched recently, the number of satellites that has been sent up is over sixty-five hundred. The satellites of today fill a variety of types and functions, such as: Intelligence/reconnaissance (Military/Government), Communication, and Earth Observation (Commercial, such as for weather prediction and map making), but for space observation, there is the so-called Killer Satellites (Military), which are used for defense by destroying enemy missiles and attack by destroying opposing space-borne equipment (i.e. other satellites). So far, only the United States, China and Russia have been able to destroy targets in space. Navigational satellites are used for GPS. Biosatellites are made to carry living material into space (generally non-human) for research.

Satellites have a variety of orbits used as well, which are chosen based on their purpose (or by misfortune and orbital decay). Orbits have many components; these are: Altitude, Centric, Eccentricity, Inclination, Pseudo, Special, and Synchronous. Altitude is the satellites distance from the surface being orbited. Earth orbits have 4 heights, ranging from low (up to 1240 miles), thru medium (up to 22,236), and Geosynchronous (22,236 miles up exactly), and all the way up to High Earth Orbit (beyond 22,236 miles but still in earth’s gravitational field). Man-made satellites in high earth orbit have typically outlasted their usefulness and are placed at this height to keep them out of the way of other satellites; this type of orbit is often called a Disposal or Junk or Graveyard orbit (by way of reference, the moon is usually 238,900 miles above the earth). When a satellite is in geosynchronous orbit, its orbital speed is around 9800 feet per second; at this height, it takes the object 1 sidereal day to orbit our planet (an average sidereal day is just under 4 minutes less than 24 hours) which corresponds with Earth’s rotational speed.

The centric orbits our satellites use, so far, are: Geocentric (around earth), Heliocentric (around the Sun), and Areocentric (around Mars). Eccentricity is essentially whether or not the satellite’s orbit is circular or elliptical. There are 4 standard elliptical earth orbits: geosynchronous transfer orbit, geostationary transfer orbit, molniya orbit, and tundra orbit. A tundra orbit has an inclination of 63. 4° and orbits the planet in a sidereal day; essentially, it stays in one fixed area (but not as exactly as a Geostationary orbit) over the planet, with its altitude varying according to the pattern of its ellipse. The Inclination of orbit is the satellite’s variance from a pure equatorial orbit – thus, a polar orbit is very nearly 90°. Pseudo orbits cover several complicated orbital patterns; one of the simplest examples of which is retrograde orbit, which simply means it turns against the direction that the celestial body being orbited rotates; retrograde orbit is rarely used because it takes more fuel to establish a lasting steady orbit. Special orbits are Sun-synchronous orbit and Moon orbit, Moon orbit is pretty much what it sounds like. Sun-synchronous orbit is a different monkey altogether; in this form of orbit, the satellite passes over the same locations at the same solar time each day; if desired, orbit can be set such that it always occurs in sunlight, which is highly conducive of clear imagining, and any shadows it encounters are in almost the same location every day.

As explained earlier, satellites in a synchronous orbit make one revolution around the celestial body they orbit in the direction that body rotates in the 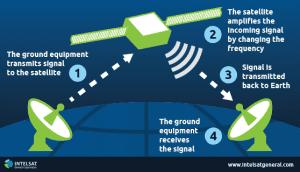 same amount of time it takes that body to rotate once; all the different varieties of synchronous orbits are variations or refinements of this.   When a satellite or celestial body orbits a larger celestial body with an inclination other than 0° and is viewed from a fixed location (generally assumed to be the surface of the earth), the pattern of movement of that satellite, if viewed at regular intervals, appears to trace some variation of a warped figure 8 pattern in the sky; this pattern is called an analemma. If orbit and rotation are constant and synchronous, the exact shaped of this weird figure 8 pattern will not change. A variety of factors determine the pattern’s exact permutation of such a ‘mutated’ figure eight pattern. A satellite with a circular orbital pattern at a 0° incline is said to have a Geostationary (aka “Clarke” – after the author) orbit. It appears to remain in the exact same place relative to the earth at all times at a height of 22,236 miles above the planet. It appears stationary; it is, in fact, whizzing thru the sky at 9800 feet per second to maintain its place relative to the earth.

After the first wave of satellites, we began to build more complex and expensive satellites, adding on more and more bells and whistles, more sensors, fancier communication arrays etc. For a long period, owning a satellite was only possible for certain governments and a very small number of mammoth corporations, due to the expense and technical expertise needed to maintain a satellite in orbit. This pattern has taken a radical turn of late; a new trend has emerged. The big thing in satellites now is smaller and cheaper. So-called nano-satellites have hit the skies; the “1- rocket/1-satellite” paradigm is no longer inviolate. The big fancy satellites are still necessary – don’t get me wrong; but this next wave of satellite tech offers new possibilities. Now, a single launch may contain upwards of thirty satellites. Due to technological advancement, many of these small satellites can have the same abilities the Sputnik had, except for being smaller, cheaper and computing much, much faster. Due to expense and orbital necessities, only certain select spots on the Earth could be influenced/observed by a satellite on a regular basis. This is now starting to change; the advent of tiny and cheap satellites will open a dizzying array of new options in communications, broadcasting and research.