May 8, 2020 — The Netflix original series Dead to Me has moved production to Cooke Optics S7/i Full Frame Plus prime lenses for season two to take advantage of the ‘Cooke Look®’ to bring a flattering look for stars Christina Applegate (nominated for a Golden Globe for Best Performance by an Actress in a Television Series – Musical or Comedy for season one) and Linda Cardellini.

With season two set to air in 2020, the series chronicles the story of a powerful friendship that blossoms between a tightly wound widow and a free spirit with a shocking secret.

When series creator and showrunner Liz Feldman wanted her main actresses to look their best on screen for season two, cinematographer Toby Oliver, ACS — who was brought on to lens the second season — decided that the “Cooke Look” would be exactly what was needed. 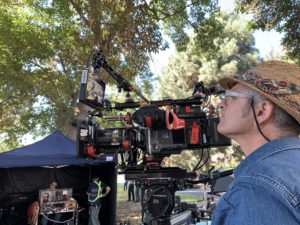 DP Toby Oliver ACS at the camera with the Cooke S7i 50mm lens shooting on location in Los Angeles.

“Liz wanted to maintain as much of the overall look of season one as possible, but she also wanted the main actresses to appear warmer on screen,” said Oliver. “To improve the photography from the first season, I decided that the Cooke S7/i Full Frame Plus prime lenses would give her exactly what she was looking for. I’ve used Cookes a lot over the years, and they are quite flattering, especially with close-ups. There’s just something about the ‘Cooke Look’ that makes actors look really good on screen – it gives the skin a nice glow.”

This was to be Oliver’s first full-frame project, shooting on Sony Venice cameras in 6K mode, using all of the full-frame sensor, so he did a range of lens tests at camera and lens supplier Alternative Rentals in Los Angeles. 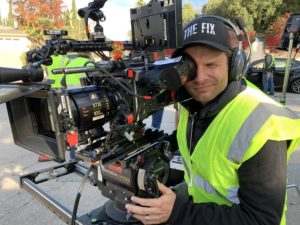 “For my own tests, we had a model at Alternative Rentals, where I looked at all the full-frame lenses that were available on a Sony Venice to do my due diligence,” said Oliver. “From a technical standpoint, I wanted to know where each lens sat compared to the others, particularly in terms of sharpness and breathing, as well as find lenses that were ergonomic for the ACs and with a full range of focal lengths and easy availability. From an artistic standpoint, I wanted the best look for the characters. The lenses that gave me exactly what I wanted were the Cooke S7/i Full Frame Plus primes.”

Later, when it came time to do the main test with the leading ladies, Oliver didn’t have to test a bunch of different lenses. “I knew that the Cookes would give the look Liz was looking for, and they did. The test with the ladies looked great,” he said.

Oliver credits Alternative Rentals with going out of their way to procure as many lenses in the S7/i range that were available for the 10-episode shooting schedule last year, as the lenses had recently been introduced. 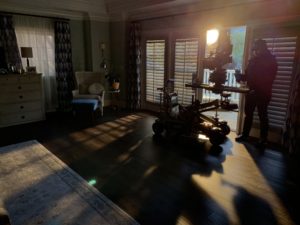 “My lens kit started with a single set of Cooke S7/i ranging from the 25mm and went all the way up to the 135mm,” said Oliver. That gave him seven prime lenses (25mm, 32mm, 40mm, 50mm, 75mm, 100mm, and 135mm) in the main set, plus duplicate lenses of the 40mm, 50mm, 75mm and 135mm for use on two, and sometimes three, Sony Venice cameras. “The combination of the Venice and the S7/i full-frame lenses are a great match, especially when working with a more mature cast. I had flexibility in lens sizes and when I needed a second set or just some extra lenses, Alternative Rentals came through…and I knew that I could trust that I was going to get the same matching results with each specific focal length from various sets. With the Cookes, I had more flexibility, but they also gave me an edge in making the actresses look good while keeping the overall tone continuous from season one to season two.”

The Cooke S7/i full-frame lenses also helped in dealing with the danger of the 6K image being too sharp — one of the downsides of digital cinematography. “You don’t want to have to fight that overly digital look. You want your lenses to help you. With the Cookes, I have an element of gentleness, without the image looking soft,” said Oliver.

In addition to choosing the best lenses and filters to help tell the story and show actors in their best light, Oliver worked with the series’ colorist, Tim Vincent of Technicolor, before shooting to look at the test shots and set up the LUTs for on-set monitoring and dailies. He was also in close contact with Vincent during the coloring process, reviewing his grades and giving notes, with dialog back and forth for the first few episodes — as well as comments from Feldman — to give Vincent a grading style for the show. 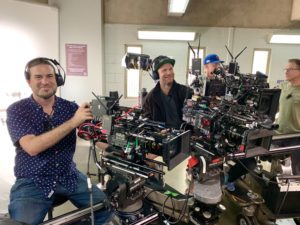 When it came to his first full-frame project, Oliver found it interesting to work in a new format where what you get is slightly different than what you expect. “Lenses come across wider than in 35mm format, which gave us a different field of view, with the 75mm prime being my ‘go-to’ lens for close-ups and medium shots,” he said. “For our wide shots, I mostly used the 32mm and 40mm. When shooting a black comedy, you’re not going to go to the extremes from scene to scene, so I didn’t use the 25mm or the 135mm as much. The bulk of the shooting is within a fairly narrow range of focal lengths, 40mm to 100mm, except for special moments.”

Another element that Oliver found very useful during shooting was Cooke’s /i Technology that collects detailed lens data for production, VFX, and post-production. “In addition to this data being recorded automatically by the Venice so that the VFX supervisor and artists would have it, I would use this data daily on the shooting monitors,” explained Oliver. “That way I would have all the details of the lens, including size, iris, distance, and other lens parameters on the edges of the monitors. That direct feedback of the iris right on the monitor is very useful, especially as I control the iris, so I don’t have to rely on hand-drawn numbers on the control.”

For season two of Dead to Me, it all came down to one thing for Oliver: “The beautiful quality of the Cooke lenses made it easier to get great pictures.”