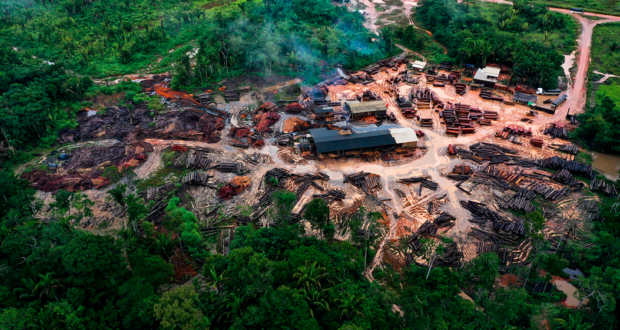 SeeBoundless is a tech lab, design studio and communication firm, and its immersive storytelling and photogrammetry is used by news outlets, educators and organizations around the world. In 2016, SeeBoundless started developing the standards and practices for 360 narrative storytelling with The Weather Channel and The Washington Post and has recently begun offering mobile AR production for worldwide news organizations, non-profits and foundations.

SeeBoundless was recently hired by TIME to create an extensive ground to treetop photogrammetry AR model of large parts of the Amazon rainforest. Showcased in TIME Magazine, the TIME website, and most impressively on the brand new TIME Immersive app, the model allows readers to move through a high resolution virtual rainforest, exposing the realities and impacts of deforestation.

To do this, SeeBoundless traveled to the Amazon rainforest and shot at both the ground and treetop levels. Founder Steve Johnson and his team built a mobile AR production and post workflow from scratch, which included drones and ground level cameras.

“What we do is much different than what other companies do with satellites or shooting 2,000 feet above ground. We get right down to ground level, and in this case tree level too, and get hi res, 360 AR models that show every detail. We can bring natural wonders, architectural marvels, breaking news events, historic artifacts (to scale) and works of art into anyone’s living room, phone or laptop,” said Johnson.

“But it is not an easy process. Only a few years ago we would need to shoot on location and bring footage back to a post house or our labs and begin stitching images together. However, the Blackmagic eGPU Pro, attached to our MacBooks, now gives us the extra power we need and allows us to begin stitching millions of image points together right in the field. It is small and easily portable but also packs a lot of extra processing power,” he added.

Traveling and shooting in the Amazon required that Johnson and his team travel extremely light. The entire workflow included a peli case for the 20 megapixel camera gear, several drones, a laptop and now with the Blackmagic eGPU Pro the SeeBoundless team can bring desktop level graphics with them anywhere.

Once on location, the team mapped out the areas for shooting and built a grid and dome map. From there, they were able to map out how to photograph every ten degrees of space.

“The challenge facing us was how to capture the trees and deforestation on a large scale and how to shoot from just above the tree line when the trees were constantly in motion,” Johnson said. “Every day we would get between 1,000 to 1,500 images, and we were able to stitch them altogether on site thanks to the Blackmagic eGPU Pro’s power.”

“With the eGPU, we were able to fly a pattern, and by the end of the day, the stitch was ready. Shooting in the Amazon is incredibly difficult, and we knew that we had to get these huge panoramic shots and stitch them quickly because anything could happen. We even had birds attacking the drones, so every second I could save with the Blackmagic eGPU Pro was important,” he finished.

Product photos of the Blackmagic eGPU Pro, as well as all other Blackmagic Design products, are available at www.blackmagicdesign.com/media/images.