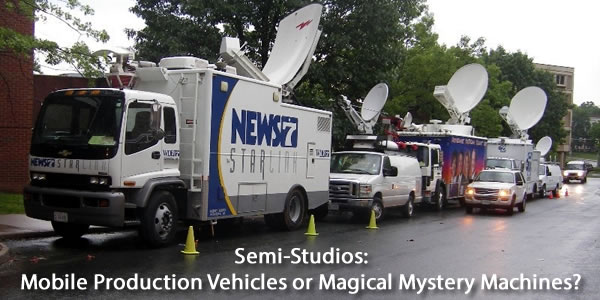 You know you’ve seen’em – the super-large semis with full production studios inside them… And although they come in standard van sizes (that your local affiliates have), I’m talking about the ones you could practically live in – with all the bells and whistles that even some of the smaller studios and post-production houses just don’t have!  These are the ones you’ll find at the BIG sporting events (and, yes, the Olympics had their share of them scattered about) and on display at the 2014 NAB Show.  I always make it a point to navigate my way over to where they’re sitting, just so I can walk through them, look around, and dream about having one! The thing is, with these production vehicles, they are complete studios on wheels – or can be!  A mobile studio can be any size and made from virtually any vehicle.  In the case of the large semis, a semi-trailer is the choice of many.  Sure, they are all compact and transportable when you see them closed-up and/or on the road, but when they are stationed and begin to unfold, the reality that this is actually a production studio is easier to see. You can usually tell one of these – because of the large satellite antenna.  The larger trucks usually have them, and they come in all sizes – from ones that fit conveniently on the roof to those that are as large as the truck itself.  But no matter how it looks on the outside, the real magic is what’s happening inside.  It’s the purpose, configuration and mainly the equipment that marks the success of the mobile production studio.

There are many companies in the United States that specialize in the custom manufacture of these behemoths, loaded with

equipment to your specifications and needs, and there are even trucks that are either made-up as demonstration units or units that have been ordered and not taken, leaving them “in stock” and available instantly.  Although most who require mobile facilities create their own, there obviously is a market for these vehicles.

The larger facilities that build mobile studios rely mostly on their own facilities and engineering expertise to not only design the trucks but also to construct them from scratch – starting, often times, from an empty shell. reliable and secure real-time IP based communications via satellite on a standardized vehicle platform.  Offered in lengths up to 53′, Frontline Communications’ EFP/O.B. Trailers are mobile production suites which include all the features and equipment found in fixed production facilities.   Five full racks of equipment can be installed in this configuration.  Specialty broadcast vehicles with dual band satellite capability, tandem axle tractors sporting multiple antennas have been achieved.  Multiple floorplans have been engineered and new ones can be created, with the ability to house up to 30 operators.  For more on Frontline’s products, visit: www.frontlinecomm.com/ Game Creek Video in Hudson, NH has, for over 21 years, provided production companies, television networks and news organizations with comprehensive mobile production solutions.  Top-of-the-line equipment is found in these units, such as GVG’s Kayenne (and other model) switchers and Calrec Apollo Surround Sound Consoles.  So many different configurations and floorplans can be seen at: www.gamecreekvideo.com/

NEP LLC (located globally and in Pittsburgh, PA) builds and maintains a fleet of mobile broadcast trucks ready for the quick-employ whenever the need arises!  Audio, video, production, editing and engineering sections can be expertly configured in the space of a semi-trailer and provide more than enough technology to handle any event.

NEP Visions has a mobile platform, providing the technical infrastructure and expertise to take 4K content from camera to satellite, and also recording and broadcasting a simultaneous HD version.

As stated in their February 18th press release: “The cameras will feed 4K content into Sony BPU4000 fibre adapters which generate 4K and HD signals simultaneously, the feeds are then sent to a 4K capable vision mixer to create a live mix from the six camera feeds, adding graphics and subtitles (for the HD version only). Pre-recorded supplementary programme materials have been ingested onto a Sony media server to play in. The live mix is passed to the satellite service provider Links Broadcast. The mix feed is recorded on a Sony MasterDeck, both for archive and the creation of a 4K DCP master that will be sent to theatres around the world. NEP Visions will also record 4K ISOs onto two additional Sony MasterDecks for later use. As well as the groundbreaking 4K presentation, NEP Visions will provide a simultaneous live HD feed for distribution by Links Broadcast to over 1000 cinemas worldwide in line with NT Live’s existing programme of broadcasts.”

See their worldwide offerings and more on their website at: www.nepinc.com/

It was just months ago that the very first 4K broadcast was transmitted; a soccer game between two British teams, Stoke City and West Ham on August 31, 2013, was the lucky chosen event. The new Telegenic truck, by the way, had a 576Ã—1152 Miranda router, three 4K monitors and a 65-inch 4K monitor to enable the production team to see the final output. Four Sony SR1000 tape decks are also part of the package, along with a Sony 8000 video production switcher.

When it comes to mobile production units, the sky’s the limit – no expense is spared and the high-tech equipment is maneuvered into spaces you wouldn’t have thought it possible.  I’ll take two, please! 🙂