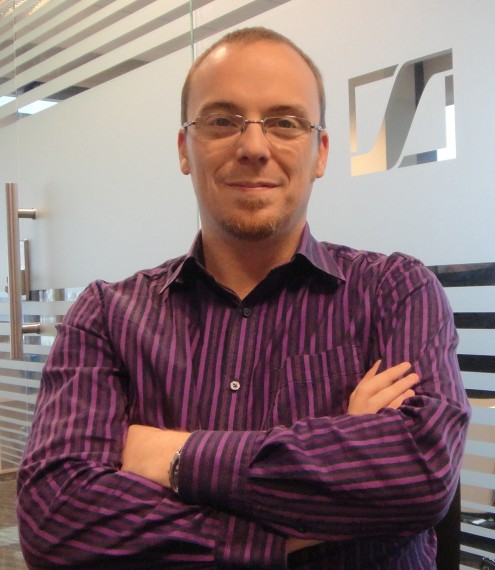 Dubai, United Arab Emirates, 08 September, 2014: Sennheiser, one of the world’s leading manufacturers of microphones, headphones and wireless transmission systems, today announced the appointment of John McGregor as its Business Development Manager (BDM) for the Middle East. The regional office in Dubai reported exceptionally strong growth figures for both turnover and profit in 2013 and believes this move will further strengthen its foothold in the region’s education and broadcast markets. In his new role, McGregor, a former tutor at the highly reputed SAE Institute in Dubai, will also drive knowledge transfer initiatives directed at the audio specialist’s Middle East partners and customers. McGregor will serve in Sennheiser Middle East’s Systems Solutions Division and will report to the company’s Director of Sales and Marketing, Mig Cardamone, who said, “On-going digitization and the convergence of IT and audio technologies are prominent trends in the region’s broadcast industry, while educational institutions are increasingly leveraging the latest audio solutions to enhance and revolutionize the classroom experience. John has a wealth of knowledge and experience specific to both these verticals which will help him guide customers in making sound investments. As he grows within his role, he will also extend his focus to segments such as installed sound.”

Sennheiser’s Systems Solution Division encompasses both Professional Systems and Integrated Systems and broadly covers the company’s entire professional audio segment. As a member of this division, McGregor will drive business opportunities for Sennheiser’s range of wired and wireless microphones, conference and translation systems as well as for products from Neumann, a part of Sennheiser Group, and K-Array and Rycote, which are Sennheiser partner brands. He will also play a key role in educating and training partners and customers to ensure the optimal deployment and utilization of Sennheiser’s products.

Prior to joining Sennheiser, McGregor worked as a BDM at MediaCast, a Dubai-based premier distributor of professional audio/video solutions ranging from broadcast, live-to-post, and on-demand. He also served a five year tenure as a lecturer at the SAE Institute in Dubai during which he enjoyed the privilege of being one of the first professionals in the region to utilize cutting-edge audio systems such as the AMS Neve digital console and the Avid Control Surfaces.

Commenting on his new role, McGregor said, “I’ve always been very impressed with the speed at which the Middle East accepts and implements new technologies. Having worked in the production, education and sales sides of the industry, I know how the industry operates and I look forward to helping customers get to where they want to be. Sennheiser is at the very forefront of audio innovation and leadership and I am excited to be a part of this industry powerhouse.”

The Sennheiser Group, with its headquarters in Wedemark near Hanover, Germany, is one of the world’s leading manufacturers of microphones, headphones and wireless transmission systems. In 2013 the family company, which was founded in 1945, achieved a turnover of around 590 million euros. Sennheiser employs more than 2,500 people worldwide, and has manufacturing plants in Germany, Ireland and the USA. The company is represented worldwide by subsidiaries in France, Great Britain, Belgium, the Netherlands, Switzerland and Liechtenstein, Germany, Denmark (Nordic), Russia, Hong Kong, India, Singapore, Japan, China, Australia and New Zealand, Canada, Mexico and the USA, as well as by long-term trading partners in many other countries. Also part of the Sennheiser Group are Georg Neumann GmbH, Berlin (studio microphones and monitor loudspeakers), and the joint venture Sennheiser Communications A/S (headsets for PCs, offices and call centres).

You can find all the latest information on Sennheiser by visiting our website at www.sennheiser.com.