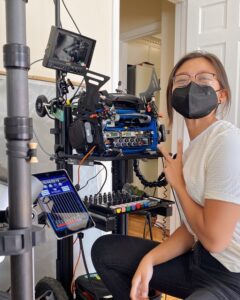 A native of Lanzhou in northwest China, Wen attended the University of Hertfordshire in the UK, where she earned a baccalaureate in filmmaking, afterwards moving to LA to continue her education. In school she explored all aspects of filmmaking — writing, directing, photography, sound, etc. — and found her strongest passion in sound. In her young career she’s mixed sound for many commercials, including for mega-brands like Gatorade, and worked as a utility sound technician on the soon-to-be released musical 1660 Vine, starring Lisa Loeb.

As many beginners in the industry do, she started out with lower-grade professional or semi-pro equipment out of economic necessity. No professional ever wants to be the cause of an interruption in a shoot, so she asked friends and colleagues for advice. Eager to learn more on her own, Wen also watched a YouTube video series for sound mixers called What’s in Your Kit?, produced by URSA Straps. The various episodes feature many production sound personnel from all over the world explaining what pieces of equipment they use, how they use them, and why they chose them. She jokes, “Watching them made me think, wow, I could have a big cart like that!” She also realized from these videos that the professional sound mixers she saw were using Lectrosonics. Wen described that “Once I tried Lectrosonics myself, I found the products entirely trustworthy.”

One of her favorite acquisitions has been the HMa Plug-On Transmitter, which has proven to be remarkably useful and versatile, with a great range — she adds that it has never dropped signal — and for durability, she says it’s “like a small brick. It’s very durable and … its batteries last six to eight hours, but they’re also easy to change.” She likes to use it on her boom mic. On a recent narrative drama feature shoot, where the production team was constantly on the move from place to place along a trail — she likened it to hiking — having a wireless boom saved a lot of time that otherwise would’ve been spent wrangling cables, and so the sound crew could keep pace moving with the rest of the crew. Now the HMa is her #1 way to go on the boom.

Wen recounted a scene shot on a very hot summer day inside an upper floor of an old LA building that had no elevator. She worked from the ground floor while her boom op worked the scene on the floors some 100 to 150 feet above. She explained,  ”My audio was perfect and clear, even with a passive antenna system.”

Overall, she has high praise for her Lectrosonics gear: “Lectro gives me confidence in the reliability of my kit, so I can focus on my job and don’t have to worry about technical issues.”

Wen’s future projects include more commercial shoots for Gatorade and other national brands, and she plans to invest in some new Lectrosonics digital systems — probably based around the latest DCR or DSR receivers, she says.

Well respected within the film, broadcast, and theatre technical communities since 1971, Lectrosonics wireless microphone systems and audio processing products are used daily in mission-critical applications by audio engineers familiar with the company’s dedication to quality, customer service, and innovation. Lectrosonics received an Academy Scientific and Technical Award for its Digital Hybrid Wireless® technology and is a US manufacturer based in Rio Rancho, New Mexico. Visit the company online at www.lectrosonics.com. For spare parts and a full line of accessories, visit the company’s online store: Lectrosonics U.S. Online Accessory Store.