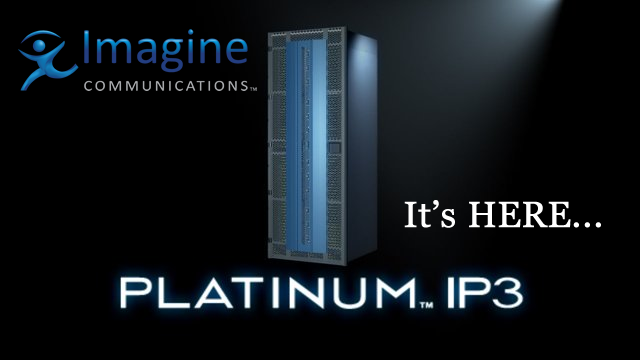 Are you In need of an enterprise-class, IP-ready router? Look no further – because Imagine Communications has you covered! A miracle for leading broadcasters and production facilities alike, the Platinum IP3 multi-path routing switcher is quickly sliding-in to the favorites position on the video infrastructure enterprise market ticket!

More than 50 Platinum™ IP3 multi-path routing switchers have been delivered to European broadcasters and facilities in recent months. Already the de facto standard in many new and upgraded outside broadcast trucks throughout Europe, the latest evolution in Imagine Communications’ innovative Platinum router technology is putting every other contender to shame! Ideal for a wide variety of applications — from Outside Broadcast trucks that need large-scale routing, to multichannel video programming distributors and large national broadcasters or network hubs that require 1,000s of I/O, this large enterprise-scale IP3 router not only combines mixed-format video and audio routing, multiviewer functionality, mux/demux, frame sync and advanced I/O options such as MADI and fiber, they are all provided within a convenient space-saving frame.

Clark Media, a manufacturer of HD mobile trucks and broadcast equipment signed a deal for the revolutionary router on the NAB Show floor at this year’s convention.

“We came to the NAB with the specific intention of identifying new technologies that would enable us to continue to offer our clients the most flexible technology options as we move to 4K and beyond,” said Gary Snyder, president and engineer, Clark Media.

Clark has worked with Imagine Communications’ Platinum 9 RU and 15 RU in their HD fly-pack systems, so they were familiar with the flexibility of the Platinum family. After seeing first-hand demonstrations of the remarkable IP3, they had instant confidence that it would handle all of their current 3G and 4K signals, in addition to providing a pathway to IP solutions as the technology evolves. Because their HD/4K truck was currently under construction, they were very fortunate to be able to purchase the Platinum IP3 router system right off the showroom floor.

“Our new HD/4K mobile truck will be completely router-centric, so this was the most important decision that we made as we looked to build the remote production truck of the future, which needed to support 3G, 4K and even IP,” Snyder explained.

There is a strong demand for the Platinum™ IP3 router, which has remained steady since its debut a couple years ago, and has achieved considerable worldwide momentum, with nearly two dozen orders from Europe and Africa alone immediately upon its debut.

In addition to strong customer demand worldwide, the product has received numerous industry accolades.  The product holds many prestigious honors, including those from the IABM Awards for Design & Innovation, the BIRTV Award for Innovation in Beijing, China, and an award during the SET show in Brazil for best routing and signal distribution product.

NEP Australia, a leading provider of outsourced television production services, is sporting new IP3 that will be deployed in their new state-of-the-art HD broadcast trailer, which will enter service in the second half of 2015 and be followed by a second truck with the same design, also integrating an Imagine Communications Platinum IP3 router.

“We are constantly upgrading our outside broadcast fleet to ensure we always provide the most advanced and attractive capabilities to our clients,” said Terry Manley, chief engineer, NEP Australia.

NEP Australia appreciates the Platinum IP3 router’s ability to switch multiple signals in the same frame, according to Manley. However, it’s the MADI option on the IP3 that allows it to route multiplexed audio data as well as discrete audio that really is a plus for NEP. Since the truck supports 32 cameras, multiple replay devices and numerous auxiliary audio and video inputs, the truck is required to be able to handle as many as six transmission outputs when covering major events. “The power of the Platinum IP3, in a relatively compact form factor, is a huge advantage when designing our new fleet,” explains Manley. “The fact that Imagine Communications has a direct presence in Australia is also important, providing us the reassurance of having support from an excellent engineering operation.”

Providing a range of additional functionality, including multiplexing and de-multiplexing, signal distribution, audio MADI and sophisticated multiviewer capabilities, the Platinum IP3 Router helps broadcasters take advantage of hybrid networks with IP broadcast infrastructure in conjunction with traditional broadcast audio and video networks, making it the perfect choice for the evolution to software-defined networks.

“We are delighted that the Platinum IP3 router has become a popular choice for outside broadcast trucks around the world,” said Joe Khodeir, senior vice-president, Asia Pacific, Imagine Communications. “We designed it to be massively powerful, but also compact and power-thrifty – ideal for the confined space in a truck. We are pleased that our Australian engineering team could work with NEP Australia on this project, and we look forward to seeing the truck in action at some of the country’s biggest sporting and entertainment events.”

Leading European outside broadcast company CTV uses the Platinum IP3, as it provides an extensive array of signal processing and multiviewer functionality, in addition to its routing capabilities, that meets several of CTV’s mobile production needs.

“Designing a big outside broadcast truck is a huge challenge, because we are under constant pressure to add functionality while staying within the weight and size limits to take the truck on the road,” said Hamish Greig, CTV Technical Director. “Because the Platinum router family does so much including frame synchronization, mux and demux, and multiviewers, it saves considerable space and weight, as well as reduces operational complexity by eliminating the need for external frames and the associated cabling — all of which are real bonuses. Add to that the ability to integrate IP signal routing to help make it future-proof, and it becomes the only sensible choice for a new truck.”

Devoted users include South Africa’s premier sports broadcaster, SuperSport, and central European direct-to-home satellite and Pay TV operator, Viasat, where IP3 is being used to heighten the capabilities of its Riga broadcast center in Latvia.

One of the largest orders worldwide came from sono Studiotechnik, a Munich-based broadcast systems integrator and “The Platinum IP3 router is designed to grow as the user’s requirements grow,” said Mathias Eckert, vice president, EMEA, Imagine Communications. “The router can expand to sizes of 2048 x 2048 and beyond, with signals of up to 3Gb/s video or 10-gigabit Ethernet. Most importantly, it can be reconfigured or expanded without even taking the router off air. That is a remarkable benefit for a broadcaster or transmission facility.”

So what does it do? I’ll answer that with a question – what doesn’t it do? Its mixed signal routing is sure to cover your needs – SD, HD, 3 Gb/s w/audio? Platinum’s got it; in a single 28RU frame it can have up to 576×1024 video, 1152×1024 if using two interconnected frames. Its flawless expansion allows it to be used on-air live. No downtime occurs in transition! Yowza! To safeguard results and preserve a positive workflow, Platinum IP3 includes redundancy in its control, crosspoints, power and signals. To avoid unintended data combinations, signal paths are singular and have crosspoints for audio and visual interaction. Seamless switching allows smooth and unidentifiable activation when initialized while on air.

Platinum IP3 includes audio usage functioning at its apex; discrete routing support of audio signals encompasses both balanced and unbalanced AES. AES can be embedded on analog IO modules for usage on any single video inputs supporting up to 16 AES audio streams via mono or stereo. A quiet switch is available for use during transitions. Audio primacy is furthered by Mux/Demux audio processing which supports several nice features of its own; 16 channels of streaming audio per video stream (which can even be multiplexed). Complete mono breakaway promotes an exquisitely balanced audio experience while providing routing support, as illustrated by the full and perfect integration twixt demultiplexed and discrete audio. The Platinum IP3 can optionally have an eight channel input card to synchronize frames despite wild and jumbled feed ingesting and audio shuffling. Demultiplexing (up to 16 channels) is a snap with the separate video stream’s embedded audio.

Affordable expansion is enabled via the router’s matrix expansion and provides super flexible outputs – MADI, with its characteristic low latency and fast recovery time, allows increased interconnection of high density audio. To further enhance flexibility, the Platinum IP3 includes many modular elements. Coaxial and fiber interconnectivity is further provided and supported by 8 or 9 modular I/O groups. To enhance live on-air usage, the system is front-loading and swappable while hot, which allows continual usage if so desired. Live on-air reconfiguration can be accomplished via the Magellan™ control system, which can support a broad array of hardware control panels. Easy configuration promotes optimum integration, allowing for high-powered software and web-based apps with user personalizable GUIs. SNMP and third-party vendors are supported by Magellan protocols, allowing for an admin-adjustable source and destination and can have their levels of access secured.

Platinum IP3 is riding the razors edge of innovation; it’s a cut above the rest. This impressive piece of tech is racking up one advancement after another.   It’s the first signal router that’s scale adjustable to multi frame configurations and arrangements, allowing far-reaching broadcast operations capability using a standard architecture. Multiformat signals are unfailingly delivered with unprecedented quality. Up to 576×1024 signal routing can occur in a 28RU frame. Smooth scaling up to 2Kx2K in a multi-frame arrangement has been actualized without recourse to exterior distribution amplifiers or combiners; this suspends the requirement of a station to sign off the air. The router also provides defenses for audio, video and multiviewer signals, as well as supplying redundant crosspoints within its architecture. All this nextgen attention to security serves to reduce vulnerability to unforeseen and intentional data loss.