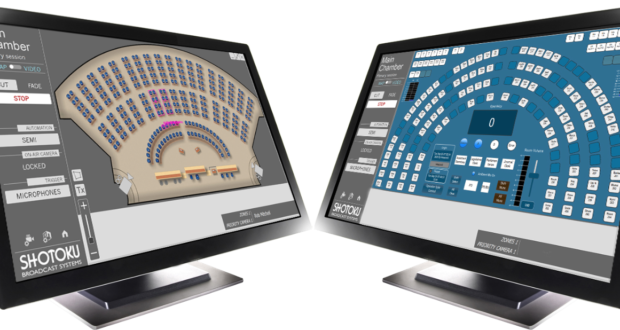 Version 3 will be at NAB sporting a new appearance that refreshes the user interface with large, clear icons and easily accessible setup functions for large multi-camera, multi-room installations. The new look serves to complement Orchestra’s continued support of all the essential functionalities required of an advanced legislative TV such as fully automatic operation driven by an audio-conferencing system, and touchscreen operation with a high-resolution graphical seat plan. And, as always, Orchestra works seamlessly alongside Shotoku’s TR-S control panel specifically aimed at legislative TV systems, providing the very highest levels of manual joystick control and high-capacity shot storage. Operators are free to focus on the live camera, effortlessly making on-air adjustments from the TR-S panel while at the same time confident that Orchestra is working with them to acquire the next speaker position either by selecting the relevant seat position on the touchscreen or receiving the automated microphone cue from the connected audio system.

Of critical importance, and common to all versions of Orchestra, the software works closely with, but is physically independent of, the TR-S panel so in the unlikely event of Orchestra becoming offline the panel is never impacted; live on-air operations will continue on all cameras.

Rapid shot acquisition has always been the key advantage of the Orchestra system – allowing numerous cameras to be directed to a given speaker position in a matter of seconds. The touchscreen can display a fixed seat plan or an animating graphic, for example reflecting all current microphone status events. It is even possible to display a live HD video image from a wide-angled spotter camera within the room giving a live view of the entire room and selecting camera positions simply by pressing an area on the live video image.

Once Orchestra has recalled the shot positions on the designated cameras, the director is presented with a selection of views of the speaker, any of which can be taken to air when desired. In Full Auto mode, Orchestra can itself make the decision to cut a camera to On-Air (or Preview) when the best available camera is in position.

As well as smooth live operation and seamless integration with the wider Shotoku system, Orchestra provides several maintenance functions such as offline shot storage and backup – vital for large, national and international law-making bodies where every second of debate must be captured and recorded over extended operating hours.

According to James Eddershaw, Shotoku’s managing director, “Shotoku is a well-established leader in remote camera systems for Legislative TV, and the launch of this latest edition of Orchestra highlights our commitment once again to continuous development in this key application.”

Journalists, visit Shotoku and see the new Orchestra v3 in action: Click here to arrange a meeting with Shotoku at NAB 2022.