Production database is building a growing legion of pro and non-pro fans eager for details about the gear used to make movies and TV shows.

Los Angeles—Motion picture and television professionals hungry to know what gear was used to shoot the latest Star Wars epic or Netflix’s hottest new show are quickly turning ShotOnWhat? into one of the production industry’s most popular destinations on the web. The production and post production database site, which includes detailed information on everything from the camera lenses to the sound equipment to the visual effects software used to produce particular movies and TV shows, has pushed past 100,000 page views per month. And site founder James LaViola predicts that’s just the tip of the iceberg.

“The response from the professional community has been overwhelming,” LaViola says. “If you want to know the names of the stars and crews of a movie, you can look that up on other major movie websites. But if you want to know what cameras, lenses and other gear were used to make that movie, you go to ShotOnWhat? For cinematographers, editors, colorists and other pros, technical details related to production and post production are very important. We’ve built a database where all that information is freely and easily accessible.” 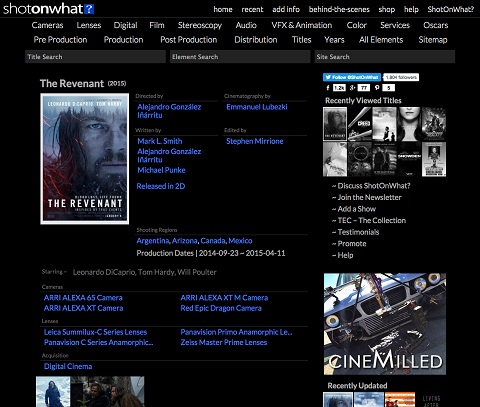 Steven Poster ASC, President of International Cinematographers Guild calls ShotOnWhat? an indispensable tool. “ShotOnWhat? takes off where IMDB stops,” he observes. “It is a technical reference to everything about how movies are made, far above any other.”

ShotOnWhat? collects data submitted by crew members and others about gear, technology and processes used in movie and television productions. The information is verified, classified, indexed and made available through the site. Since its launch in 2012, the site has gathered information on more than 20,000 TV and movie productions. That includes data on more than 3500 items in 85 categories, with new data added at an accelerating pace.

In terms of its depth of information on filmmaking technology, there’s nothing like it. And, it’s not just information related to current and recent films. ShotOnWhat? makes a concerted effort to gather data on movies of the past by encouraging older and retired pros to share their recollections and submit data, as well as film historians. That makes the site valuable not only as a production planning tool but as a rich repository of information about movie-making’s past.

“If we don’t capture this information, it is likely to be lost forever,” notes LaViola. “No one else is collecting information about how early movies were made and the tools that were invented or pioneered on individual productions.”

ShotOnWhat? recently spawned a companion site ShotOnSet!, a collection of thousands of behind-the-scenes photography from TV and movie sets. Both sites are built through communal collaboration with expenses met through manufacturer participation and sponsorships, advertising and donations.

In its little more than three years of existence, ShotOnWhat? has developed into an invaluable resource and planning tool. “Cinematographers who want to emulate the look of a particular movie scene come to our site to find out what cameras and lenses were used,” LaViola explains.

Similarly, the site has drawn praise from technology manufacturers. “If you’re a dolly manufacturer, you can quickly find out which movies have used your product,” LaViola observes. “That information was previously unavailable. It’s a great marketing tool.” LaViola adds that the site has also built a dedicated following among researchers, film students and movie buffs.

LaViola has plans to expand the site and increase its features. One planned upgrade would connect location data to Google Street View so that visitors can get a bird’s eye view of the places where a movie was shot.

While the site’s database is expanding quickly, site visits are growing even faster. LaViola expects the number of visitors to the site to more than quadruple this year. “As traffic increases, we’re getting more interest from advertisers and investors,” LaViola says. “That in turn will help us further develop the site and add more of the features our users are clamoring for.”

ShotOnWhat? is dedicated to preserving detailed data about production and post production aspects of motion picture and television production. It includes technical information about cameras, lenses, gear, post, sound, VFX and other associated elements, processes and notations. Information is verified, searchable and cross referenced. Since its launch in 2012, ShotOnWhat? has become an essential resource for professionals, researchers, students, and movie-buffs alike.