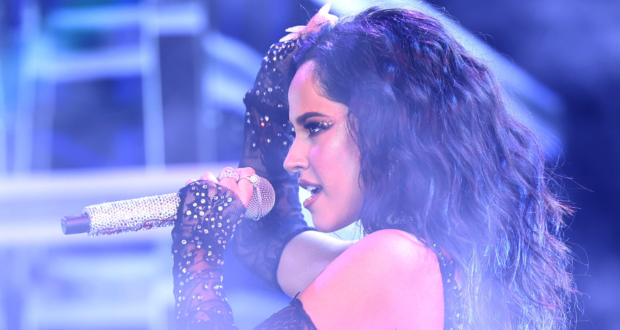 Honoring the hottest names in music and featuring performances from some of today’s most prominent artists, this year’s Billboard Music Awards were celebrated in style with extraordinary Shure wireless audio. The event was held at the MGM Grand Garden Arena in Las Vegas, broadcast by NBC, and streamed on Peacock.

Those tuning in to the awards show were treated to spirited acts by artists who trust Shure gear to capture the audio for their live performances. Commanding the stage, Silk Sonic sang into an AD2/Beta® 58A mic, Machine Gun Kelly rocked out with a custom white ADX2/KSM9, Miranda Lambert and Elle King sported AD2 Axient® Digital transmitters, and Megan Thee Stallion used her own custom black metallic finish ADX2FD/K9B mic as a statement piece. Likewise, Becky G performed with an ADX2/SM58, Maxwell depended on a chrome-plated AD2/SM58®, and Dan + Shay relied on AD2/SM58 and AD2/KSM9, respectively.

Throughout the awards, the expert audio team relied on Shure Axient Digital Wirelesstechnology to deliver clear and reliable audio for the MGM Grand Garden Arena audience and those watching at home via broadcast and streaming. Supervising the RF was Soundtronic’s Stephen Vaughn.

“The support of Shure at these shows is invaluable and welcomed. Having a choice of several custom colors and finishes on hand allows us to provide on-the-spot choices to artists,” shared Stephen, who has relied on Shure Axient Digital to provide unparalleled frequency coordination on the world’s most famous stages. “I spend a good amount of time monitoring the Quality Meter on Axient Digital receivers. It gives me quick, reliable information about RF signal strength. This is crucial to me, both before and during a performance. For most shows, we’ll use multiple transmitters on each channel. Using the signal strength in conjunction with the Quality Meter, I know right away whether we have more than one transmitter turned on.”

“Thanks to an A-list crew and a diverse group of premier artists, it was an honor to support and attend this year’s show,” said Ryan Smith, Regional Manager, Artist Relations Nashville, at Shure. “We truly appreciate all of the artists who continuously choose Shure for their performances.”