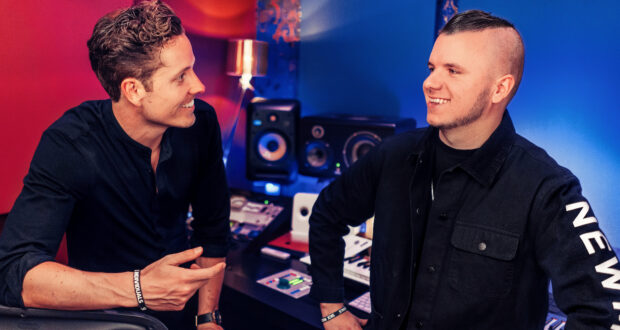 Sick Individuals Mix to the Beat With KRK Studio Monitors

NETHERLANDS, MARCH 24, 2021 – With numerous worldwide hit singles to their name, support from the biggest artists in EDM and pop music, as well as a history of performing at the world’s most prestigious venues and festivals, Sick Individuals continues to set new boundaries. Having relied on KRK and its products in-studio for the past eight years, Sick Individuals has acquired an arsenal of the brand’s studio monitors, including the V8S1s, V8S2s, ROKIT 6 G3s, and VXT6s.

Meeting at the Conservatory for Music in the Netherlands, Rinze ‘Ray’ Hofstee and Joep ‘Jim’ Smeele were first introduced to KRK in their Education for Composition & Music Production program in 2009. The KRK V8s were deployed in the school’s main studio, and the duo was immediately drawn to their iconic, realistic sound, and pristine representation of bass-heavy tracks.

“KRK studio monitors are an extremely useful tool when mixing dance music,” says Rinze “Ray” Hofstee of Sick Individuals. “They create the perfect amount of tightness and roundness to kick sounds and basslines up a notch, leaving listeners feeling as if they’re actually in the club. Some brands tighten up the speakers too much, resulting in a reduced ability to use them for creating purposes. We want to feel free while producing, instead of directly focusing on how an individual part sounds, and KRKs definitely provide that creative freedom.”

For a midsize studio like theirs, Sick Individuals finds their V8s to have the perfect amount of power to fill the room. “We’re currently deploying KRK V8s in our studio for playback and also as reference monitors,” says Joep ‘Jim’ Smeele of Sick Individuals. “Over the years, the classic sound of KRKs has remained constant in all the brand’s studio monitor offerings, and our ears have come to trust their sound. It’s always a lot of fun to create music with KRK.”

Additionally, Sick Individuals is a founding member of the KRK Kreator Alliance, a new initiative from KRK that allows the company to re-imagine how to leverage its iconic past and lean into its innovative future, all while working alongside its leading artists. “It’s an honor to be a part of this talented group of artists and producers,” says Hofstee. “As long-time KRK users, we can’t wait to see what the future has in store for the brand and we’re excited to take part in its continued innovation.”