Los Angeles— A simple walk in a park can prove heartbreaking for sufferers of age-related macular degenerative disease as vividly represented in a public service announcement produced by Women in Film for the Discovery Eye Foundation’s Macular Degeneration Partnership. The SIM Group, through its SIM Digital, Bling Digital and Chainsaw divisions, donated a variety of goods and services toward the production of the PSA, which stresses the importance of early detection in avoiding the worst consequences of a disease that affects some 15 million Americans.

Titled One Focus, the PSA allows viewers to see the world through the eyes of someone afflicted with AMD. It follows a woman as she visits a park and shows her growing concern as familiar objects such as signs, flowers, ice cream and faces become blurred. As the voiceover describes the Macular Degeneration Partnership’s work to preserve eyesight, the distorted objects become clear again. 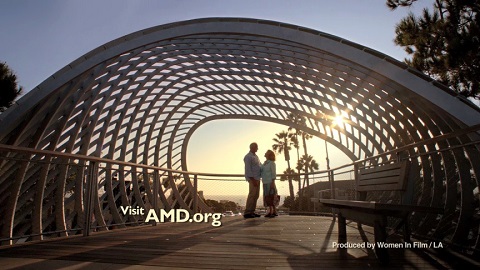 “The camera follows our grandmother because it was important to show how macular degeneration affects the center vision,” says Bonnie Spence, who directed the spot. ” It’s very confusing and frustrating when you can no longer recognize faces or read a full sentence. Early detection and treatment is crucial.” One Focus is being released domestically and internationally.

The PSA is part of Women in Film’s ongoing program to produce PSAs pro bono for selected charitable organizations. Crew and suppliers involved in the production of One Focus donated their time, skills and resources. The SIM Group’s contribution included a complete camera package from SIM Group, dailies processing from Bling Digital, and visual effects and post-production finishing from Chainsaw.

“Women in Film’s PSA program has a stellar reputation, and we were happy to assist in their work,” said SIM Group Director of Marketing Suzanne Lezotte. “It was not only an opportunity to support an important and worthy cause, it was also a chance to work with great people, like Bonnie Spence, Cinematographer Cynthia Pushek, ASC and Producer Romell Foster-Owens.”

Without the support of the SIM Group and other volunteers, producing a PSA of this caliber would have been beyond the budget resources of the non-profit Discovery Eye Foundation. “We were very impressed with the enthusiasm and professionalism of all of the people who helped make this possible,” said Judi Delgado, the group’s Executive Director.

Women in Film’s PSA program focuses primarily on charities, like Discovery Eye Foundation’s Macular Degeneration Program, that help women and children. A majority of professional volunteers who create the spots are also women. “This project not only had women as director, cinematographer and producer, it also featured women in non-traditional roles,” noted Foster-Owens. “Our boom operator, our key grip and our first assistant camera were all women.” 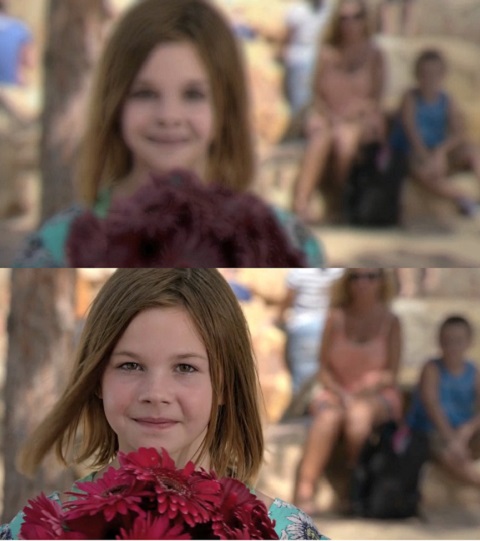 Backed by Toronto-based investment firm Granite Partners, the SIM Group is a leading supplier of production equipment, workflow and post-production solutions, with offices across the US, Canada and China. Our diverse services can be utilized on any production at any stage. In Canada, our offices in Toronto and Vancouver service grip and lighting from PS Production Services and can be complemented with SIM Digital cinematography and playback equipment for any production’s needs.  Bling, Chainsaw, Pixel Underground, Tattersall Sound and Picture and Post Factory NY provide an array of services from dailies, to online and offline editing, to final color/DI and visual effects, to sound editorial and mixing. Bling’s services, which include a comprehensive workflow solution, are offered at all offices across the US and Canada, as well as off-site service through POD (Post on Demand).  Chainsaw’s full-service facility in Hollywood provides creative editorial and extensive finishing services with some of the top colorists in the industry. Rounding out the family of companies are Pixel Underground, a Toronto-based post-production company, and its associated service, StationEX, which provides physical and file-based media fulfillment and encoding/distribution services, Tattersall Sound and Picture, a provider of sound editorial and mixing for motion pictures and television and Post Factory NY, one of the East Coast’s top independent post-production facilities. For more information, visit simgroup.com