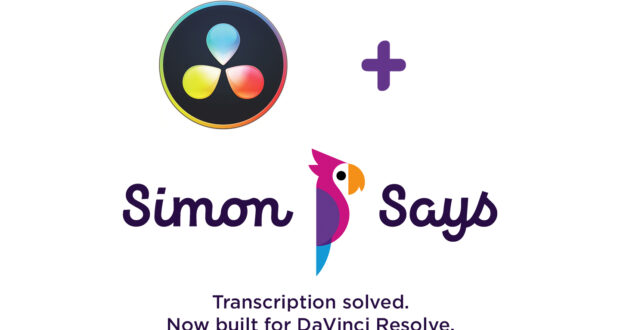 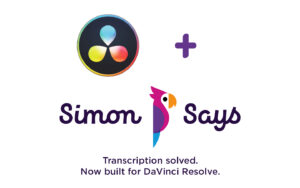 Simon Says, the leading AI-based transcription, captioning and translation platform for video professionals, today announced its seamless integration with Blackmagic’s DaVinci Resolve for macOS. Users can now easily find meaningful dialogue, in any language, and receive the frame-accurate video transcript as ranged markers, color coded by speaker, then caption timelines and even align translated subtitles once the edit is complete – all with a few clicks from DaVinci Resolve.

“Today, Simon Says became the first company to support AI transcription in Resolve,” states Shamir Allibhai, founder and CEO of Simon Says. “DaVinci Resolve is one of the most exciting non-linear editors on the scene today. Blackmagic Design has a growing, passionate user base, in part because of its unique strategy to sell great cameras with tightly coupled software add-ons and also because it offers a high-end video editing application for free. These users have been asking us to integrate our software with DaVinci Resolve, and we’re so happy to deliver it.”

What was once a painstaking and lengthy manual process is now completely automated through the use of Simon Says AI-powered transcription platform, accessible directly within DaVinci Resolve. Now, video editors will be able to transcribe rushes, dailies, and raw footage from DaVinci Resolve, then receive and attach markers to clips, greatly accelerating the editing process by enabling editors to quickly make sense of their recordings and identify compelling soundbites. At the end of an edit, users can instantly subtitle and caption their content – a critical legal requirement for distribution in the US for most TV broadcast channels, as well as OTT streaming channels such as Netflix.

How does Simon Says for DaVinci Resolve work?

Transcribe Clips in Bin and Attach Markers
With Simon Says, editors can transcribe their raw footage in minutes. Simply select the clips to import and transcribe. Add speaker labels, bookmark and make any edits in the nifty video-transcript editor. Collaborate with your team to identify the key soundbites and then export back into Resolve, receiving ranged transcript markers, color coded to delineate speakers, that attach back to the original clips. Editing just got a whole lot more efficient – versus scrubbing through audio and switching back to the edit list in another program.

Subtitle-Caption Timeline
In addition to transcribing video, Simon Says can easily and quickly caption video edits and translate subtitles into 100 languages. Use the visual subtitle editor to preview formatting and export subtitles that import back into Resolve. This will make your delivery compliant and increase accessibility to those who are hard of hearing, as well as delivery to international audiences.

Request a Media Review License
Members of the media interested in reviewing Simon Says for DaVinci Resolve can request a product review license by contacting Kristin Canders at [email protected].

Transcribing used to be frustrating. Simon Says solved it.

Simon Says has been featured in Apple’s Keynote (twice), has cloud and on-premises applications that are suitable for every security requirement, and is used by customers at Adobe, BBC, CBC, CNN, Sony, Yale University, Bunim/Murray, Goodby Silverstein, and TED.