The popular adage that the only thing constant is change is particularly true of the broadcast market. Take watching television as an example — after the initial change from black and white to colour television, the only real changes came in the form of the size of the sets. Then it was the type and composition of the screens, from tube to plasma, LCD and OLED. But when it comes to the actual television viewing experience, did we really think watching moving pictures in what is essentially a box would evolve so much?

Days of the idiot box are long gone

Well, it has. Watching television is undoubtedly no longer a linear experience and its very definition is blurred by the fact that watching television actually encompasses so much more — like on-demand viewing, catch up television on our smart phones and interacting with programmes on our tablets. At the heart of this change is us — the consumer. We’re faced with more and more choice when it comes to content, a greater range of how to watch it, and even more options of when to watch it. Whether the content is from a terrestrial, satellite or cable broadcaster, or OTT provider, and whether that’s coming through a set-top box, games console, laptop, tablet or smart phone, and whether it’s series, movies, news or live events, for consumers it’s about quality and choice, and for broadcasters it’s about monetisation.

The market is growing

The figures back up this constant change. There’s been growth in the OTT space particularly with so-called traditional broadcasters exploring streaming options to compete with the likes of Amazon and Netflix, and they’re even reaching into new markets; just consider the announcement of the 2016 launch of a streaming service in the US by the BBC. According to Infonetics Research, the global set-top box market is forecast to be worth over $19 billion by 2018.

Interactivity is the new black

With all this fierce competition and choice for the consumer, how has viewing behaviour changed, beyond the obvious? It’s all about interaction now. 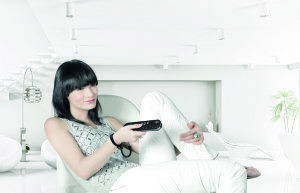 What about the user experience?

Ultimately consumers don’t care where the content is coming from, just that they can watch it when, where and how they like. So how do broadcasters ensure this interactivity and make sure they’re meeting the needs of viewers while making money?

The user experience. And a key part of this, particularly in the living room, for example, is the humble remote control. The remote control guides the viewer experience from searching for content, selecting it, setting reminders and finding ways to access it.

What does the research say?

Recent research conducted by Trendbox DB on behalf of Universal Electronics of viewers in the UK, Germany and France, found there was an average of 3.3 remote controls per household. This is in no way surprising considering that 75% of respondents also had other devices (like set-top boxes, DVD players, games consoles and computers) connected to their main televisions.

One of the ways of addressing this complexity is by adopting a universal remote. In the research, 25% of respondents used a universal remote and of that percentage 32% believe that it is easier than using multiple remotes to control multiple devices.

It came as no surprise that men dominated remote control usage or that the volume buttons were the most used on the remote. A third of those surveyed also admitted that they only used a few buttons because they didn’t understand what the rest actually did.

But there were a few surprises — like confusion around switching source, or navigating between TV, set-top box, games console and other components like a DVD player or amplifier.  One-third (34%) of respondents said that they struggled to get the right picture onto the screen. Yes this affects the user experience, but it also has a knock-on effect for broadcasters and manufacturers. One-tenth (10%) of respondents who said they struggled with getting the source right contacted customer support for help. The number in itself isn’t significant, but when you consider the time each call would take — time a customer service representative could be spending on other queries or sales calls — and the financial consequences become clear.

Whether that is using voice, gesture control, apps or track pads to navigate through content and make a content choice, it’s up to broadcasters and manufacturers to ensure that increased choice doesn’t equate to increased complexity. After all, if something is too complex or time consuming, users can easily find other content, another provider and another way to watch it.