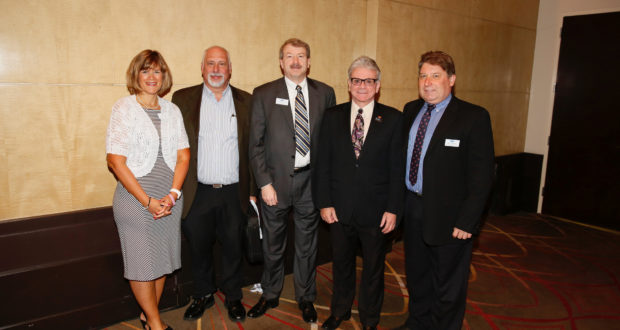 LOS ANGELES and WHITE PLAINS, N.Y. — Aug. 25, 2016 — The Society of Motion Picture and Television Engineers(R) (SMPTE(R)), the organization whose standards work has supported a century of technological advances in entertainment technology, has announced conference program details for the SMPTE 2016 Annual Technical Conference & Exhibition (SMPTE 2016), Oct. 25-27 in Hollywood, California. During SMPTE 2016, conference sessions will feature industry experts from around the world, who will present 73 papers exploring timely, compelling topics that are shaping the field of motion imaging.

“The SMPTE 2016 program committee evaluated more than 170 technical papers for relevance, innovation, and educational value to the creative and technological communities serving the motion-imaging industry,” said Paul Chapman, SMPTE 2016 conference chair. “We are confident that the resulting conference program is captivating and worthy of SMPTE‘s centennial year!”

Papers will address ultra-high-definition (UHD) and 4K/8K resolution, higher frame rates (HFR), high-dynamic-range (HDR), and wider color gamut (WCG) in sessions that examine how these aspects impact and align with the director’s original creative intent. The “Future of Cinema” sessions will focus on delivering higher-contrast HDR images and increasing pixels per second by delving into the aesthetics of HFR capture, the psychovisual effects of HFR presentation, and the impact achieved by overfilling one’s field of view. Sessions dedicated to color management likewise focus on HDR while examining the art and science of preserving and enhancing creative intent. Presentations on display technologies will address the challenges of developing test patterns to evaluate and calibrate UHD HDR displays and also discuss the use of the 60 GHz radio spectrum to provide wireless high-bandwidth display connections.

Two sessions on new distribution modalities will discuss challenges in transmitting immersive-quality video for over-the-top (OTT) services and the influence of digital technology on distribution channels. In sessions on video compression, presenters will discuss both ends of the spectrum: low-bandwidth usage for OTT internet delivery to mobile devices and mezzanine encoding for high-end, intra-, and inter-studio/facility applications.

Sessions on broadcast infrastructure will explore the nature of continued broadcast signal distribution over coaxial cable and discuss the evolution of serial digital interface (SDI), including its potential to deliver 100 Gigabit services and enable a seamless transition to internet protocol (IP). Moving into the cloud, conference sessions will focus on how broadcast media-processing capabilities can be migrated to an IP architecture and virtualized across a data center and cloud infrastructure for encoding, master control, disaster recovery, and archiving.

As the buzz around virtual reality (VR) continues to grow, this immersive format will again be featured at SMPTE‘s annual technical conference. Sessions will explore how standards, quality checks, and best practices can be counted on to protect, and even improve, the audience’s experience with VR. Speakers will present challenges, solutions, and metrics for VR workflows and content interchange, and they will review techniques to increase reliability and ensure the quality of VR productions.

Content security is an ongoing concern for the motion-imaging industry, and SMPTE 2016 conference sessions will investigate the security of Interoperable Master Format (IMF), particularly in the cloud, and the challenges of watermarking UHD/HDR content.

In the SMPTE 2016 session “Reinventing Entertainment Engineering: Merging the Experience of Today With Millennials’ Vision for Tomorrow,” six millennials in entertainment engineering will deliver presentations on their experiences, outlooks, and hopes for the future — on what it means to be a millennial in the motion-imaging field today. This session will provide insight and feature an interchange on attracting and retaining young engineers to sustain the vitality and future of the entertainment industry. The session will provide ample time for audience questions.

The Society’s annual conference offers even more than exceptional paper presentations. This year, the SMPTE Honors & Awards Ceremony will take place earlier in the week, following the SMPTE 2016 Symposium on Monday, Oct. 24. As previously announced, the event will honor individuals with awards and accolades and will feature a red carpet and poolside reception. The day will also feature the annual Women in Technology Luncheon, co-produced with the Hollywood Professional Association’s (HPA(R)) Women in Post.

On the morning of Tuesday, Oct. 25, the SMPTE 2016 opening keynote will launch three full days of conference sessions. The day also will include the Annual General Membership Meeting and the Fellows Luncheon, which is open exclusively to SMPTE Fellows and Life Fellows. The day concludes with the Welcome Reception in the Ray Dolby Exhibit Hall.

On Wednesday, Oct. 26, SMPTE 2016 will feature an Oktoberfest Reception in the Centennial Exhibit Hall, as well as the HPA Student Film Festival at the Egyptian Theatre. On Thursday, Oct. 27, SMPTE will host box lunches in both the Ray Dolby and Centennial exhibit halls.

On Friday, Oct. 28, in the Ray Dolby Ballroom, the Centennial Gala will celebrate SMPTE‘s past, present, and future. At the Gala, SMPTE will honor “Avatar” and “Titanic” director James Cameron with Honorary Membership and Douglas Trumbull, the man behind the visual effects in “2001: A Space Odyssey” and “Blade Runner,” with the Progress Medal. An entertaining and inspiring evening is planned, including a cocktail hour and dinner followed by a dance party.

Further details about SMPTE 2016 are available at www.smpte2016.org. Those registering for SMPTE 2016 may elect to purchase Symposium, Honors & Awards Ceremony, Women in Technology Luncheon, Student Film Festival, and/or SMPTE Centennial Gala tickets as add-ons to conference packages. Fellows and Life Fellows may also select tickets to the Fellows Luncheon with conference registration. Centennial Gala tickets and tables may also be purchased independently of SMPTE 2016 registration at www.smptegala.org.

About the Society of Motion Picture and Television Engineers(R) (SMPTE(R))
For the past 100 years, the people of the Society of Motion Pictures and Television Engineers (SMPTE, pronounced “simp-tee”) have sorted out the details of many significant advances in entertainment technology, from the introduction of “talkies” and color television to HD and UHD (4K, 8K) TV. Since its founding in 1916, the Society has earned an Oscar(R) and multiple Emmy(R) Awards for its work in advancing moving-imagery education and engineering across the communications, technology, media, and entertainment industries. The Society has developed thousands of standards, recommended practices, and engineering guidelines, more than 800 of which are currently in force.

SMPTE‘s global membership today includes 7,000 members, who are motion-imaging executives, engineers, creative and technology professionals, researchers, scientists, educators, and students. A partnership with the Hollywood Professional Association (HPA(R)) connects SMPTE and its membership with the professional community of businesses and individuals who provide the expertise, support, tools, and infrastructure for the creation and finishing of motion pictures, television programs, commercials, digital media, and other dynamic media content. Information on joining SMPTE is available at www.smpte.org/join.

Credit for all photos: Ryan Miller/Capture Imaging, Courtesy of SMPTE