The Society of Motion Picture and Television Engineers® (SMPTE®), a leader in motion-imaging standards and education for the communications, media, entertainment, and technology industries, today announced that the SMPTE Board of Governors has named the Society’s 2016 directors and has appointed two new governors-at-large.

“The Society couldn’t be in better hands as we move forward into the next 100 years of SMPTE,” said Robert Seidel, SMPTE president and vice president of engineering and advanced technology at CBS. “The 2016 directors and governors have the experience and vision to guide SMPTE‘s continuing success in developing standards that shape the motion-imaging industry and in providing the educational and professional resources that support engagement in this robust and dynamic field.” 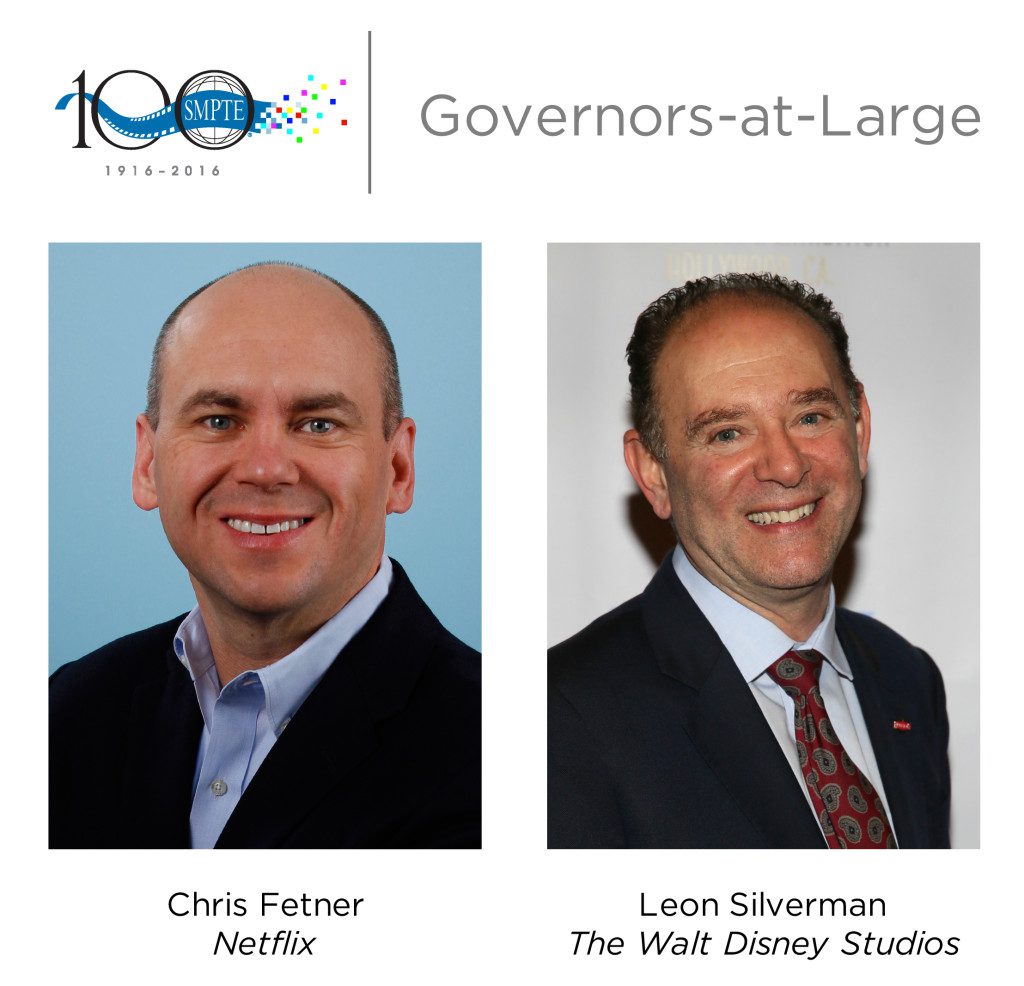 Chris Fetner, SMPTE Governor-at-Large
Fetner began his career as an operations manager at a local Public Broadcasting Systems (PBS) affiliate in Washington, D.C., and went on to serve as a producer for television programs including the award-winning show “Frontiers of Medicine.” He next served as a postproduction and operations executive at Discovery Communications, guiding the company’s migration to an all-digital workflow. Later, as vice president of postproduction and technical services at the British Broadcasting Corp. (BBC) Worldwide in New York, he oversaw all technical operations supporting both the cable network BBC America and its distribution to electronic sell-through (EST), video-on-demand (VOD), and subscription video-on-demand (SVOD) customers. At Netflix, he and his team deploy tools, processes, and knowledge that allow content owners and service vendors to deliver high-quality content to Netflix simply and with efficiency.

Leon Silverman, SMPTE Governor-at-Large
Silverman is general manager of digital studio for The Walt Disney Studios, where he oversees a team that provides on-lot digital infrastructure, postproduction, digital platform distribution services, and workflow expertise. Before Disney, Silverman spent more than two decades at LaserPacific helping to introduce new postproduction technology, services, and workflows to Hollywood’s creative and studio community. With Kodak’s acquisition of the LaserPacific, Silverman became president and simultaneously served in executive positions at Kodak. In 2002, he spearheaded a coalition of postproduction executives to help launch the HPA®, and he has served as its president since its inception. Silverman has received six Disney Inventor Awards for patent pending inventions relating to the theatrical motion-picture workflow. He is a SMPTE Fellow, an associate member of the American Society of Cinematographers (ASC), an affiliate member of American Cinema Editors (ACE), and a member of the Academy of Motion Picture Arts and Sciences (AMPAS). Silverman received the HPA Lifetime Achievement Award in 2015.

Bob Edge, SMPTE Standards Director
Edge, who is president of Bob Edge TV Consulting, has been active in television-standards work for more than 20 years. He participates in projects with SMPTE, IEEE, the Internet Engineering Task Force (IETF), the European Broadcast Union (EBU), Video Services Forum (VSF), and the Advanced Media Workflow Association (AMWA), among other organizations. Edge has served as a technology committee chair, is a SMPTE Life Fellow, and has contributed to the development of 19 SMPTE standards and registered disclosure documents (RDD). He also is the author of numerous technical papers describing the application of information technology and data networking for television production. In 2012, Edge received the SMPTE Excellence in Standards Award. 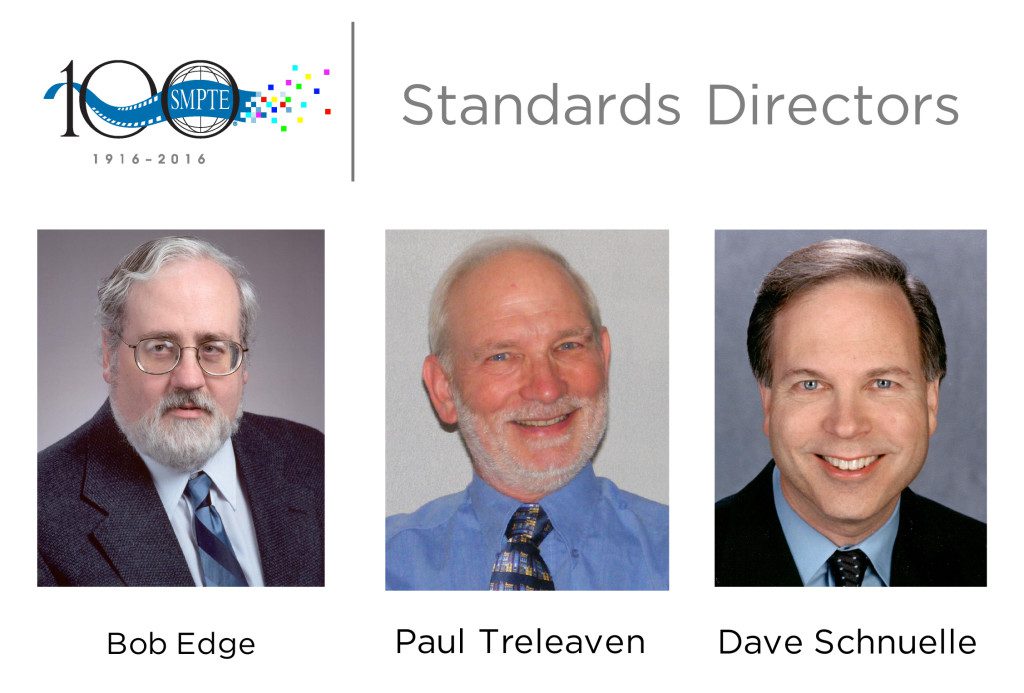 Paul Treleaven, SMPTE Standards Director
Treleaven is secretary of the SMPTE 30MR TC, having chaired this and other SMPTE standards groups. He is a member of the International Association of Broadcasting Manufacturers (IABM) Technical Task Group, representing the IABM within the SMPTE Standards Community, the Audio Engineering Society (AES) standards meetings, and EBU technology committee meetings. Treleaven is also a member of the U.K.’s National Standards Body for International Electrotechnical Commission (IEC) Technical Committee 100. He has served as SMPTE international region governor and is a SMPTE Fellow. He was a co-founder of Avitel, a company dedicated to designing and manufacturing video, audio, and timecode distribution and processing equipment, and served as the company’s technical director until 2001.

Dave Schnuelle, SMPTE Standards Director
Schnuelle is senior director of image technology for Dolby Laboratories, where he is responsible for guidance and outreach in Dolby’s efforts in both the digital cinema and consumer imaging areas. He earlier was director of technology for Lucasfilm Ltd.’s THX Division, where his accomplishments included establishing the THX Digital Mastering Program and the international digital cinema exhibition of the “Star Wars” movies — Episode 1 and Episode 2. Schnuelle has received four patents for his work during that period, and he is active in image-technology research and applications. He has participated in SMPTE standards committees for more than 30 years, beginning with the D1 videotape format in 1978 and since chairing various groups including the 21DC Digital Cinema Technology Committee. Schnuelle is a SMPTE Fellow and a member of the Academy of Motion Picture Arts and Sciences (AMPAS). 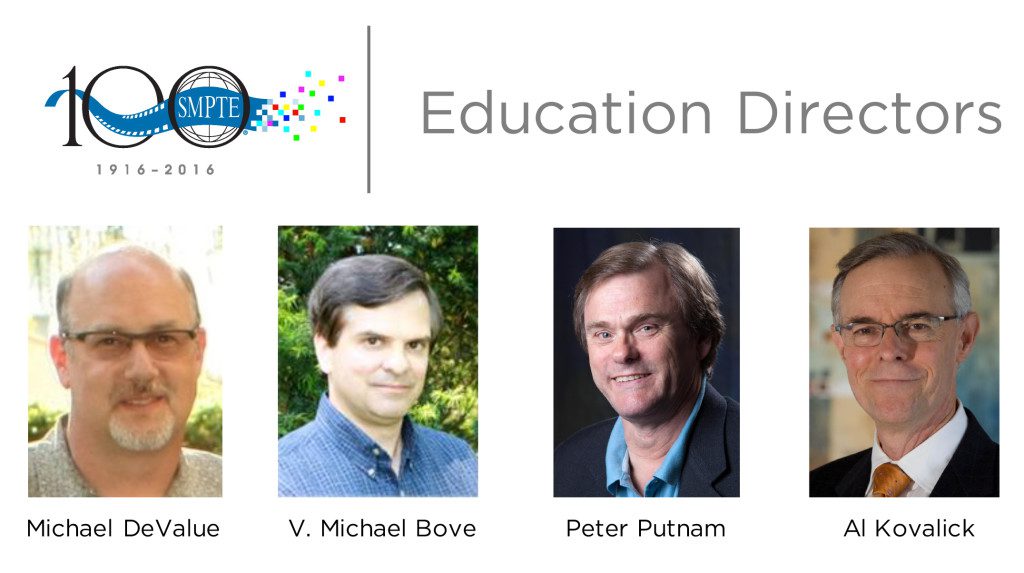 Michael DeValue, SMPTE Education Director
DeValue is director of advanced technology at The Walt Disney Studios, where he is responsible for standards, as well as for researching new technologies — such as 3D, 4K, and high-dynamic-range (HDR) — as related to content distribution. He has co-chaired several groups related to 3D in the home for SMPTE and presented a session on captions in stereoscopic 3D at the SMPTE 2010 Annual Technical Conference & Exhibition. DeValue is an active participant in the Blu-ray Disc Association and UHD Alliance, and he is also the current chair of the Advanced Imaging Society.

V. Michael Bove, SMPTE Education Director
Bove holds an S.B.E.E., an S.M. in visual studies, and a doctorate in media technology, all from the Massachusetts Institute of Technology (MIT), where he is the head of the Object-Based Media Group at the Media Laboratory. He is the author or co-author of more than 90 journal and conference papers; holds patents on inventions relating to video recording, hard copy, interactive television, and medical imaging; and is a co-author of the book “Holographic Imaging.” He is on the board of editors of the SMPTE Motion Imaging Journal; has served as associate editor of the journal Optical Engineering (OE); and is a fellow of the SPIE and the Institute for Innovation, Creativity, and Capital.

Peter Putman, SMPTE Education Director
Putman is the president of ROAM Consulting LLC and consults on technology and economic trends in display devices, wireless connectivity, display interfacing, video compression, and mobile electronics. He is an InfoComm Senior Academy Instructor for the International Communications Industries Association (ICIA) and was named its Educator of the Year for 2008. Putman is on the board of editors of the SMPTE Motion Imaging Journal, is a contributing editor for Sound & Communications magazine, and publishes the website HDTVexpert.com.

Al Kovalick, SMPTE Education Director
Kovalick, the founder of Media Systems Consulting, has worked in the field of hybrid audiovisual and IT systems for the past 20 years, and he currently focuses on media systems, file-based workflows, and cloud migration for media facilities. His book, “Video Systems in an IT Environment,” was the first to cover the salient aspects of the convergence of audiovisual and IT systems. Kovalick has presented more than 50 papers at industry conferences worldwide, and he holds 13 U.S. and foreign patents. In 2009, he was awarded SMPTE‘s David Sarnoff Medal for engineering achievement. Kovalick is a life member of Tau Beta Pi, an IEEE member, and a SMPTE Life Fellow. He is the “Cloudspotter’s Journal” columnist for TV Technology magazine. 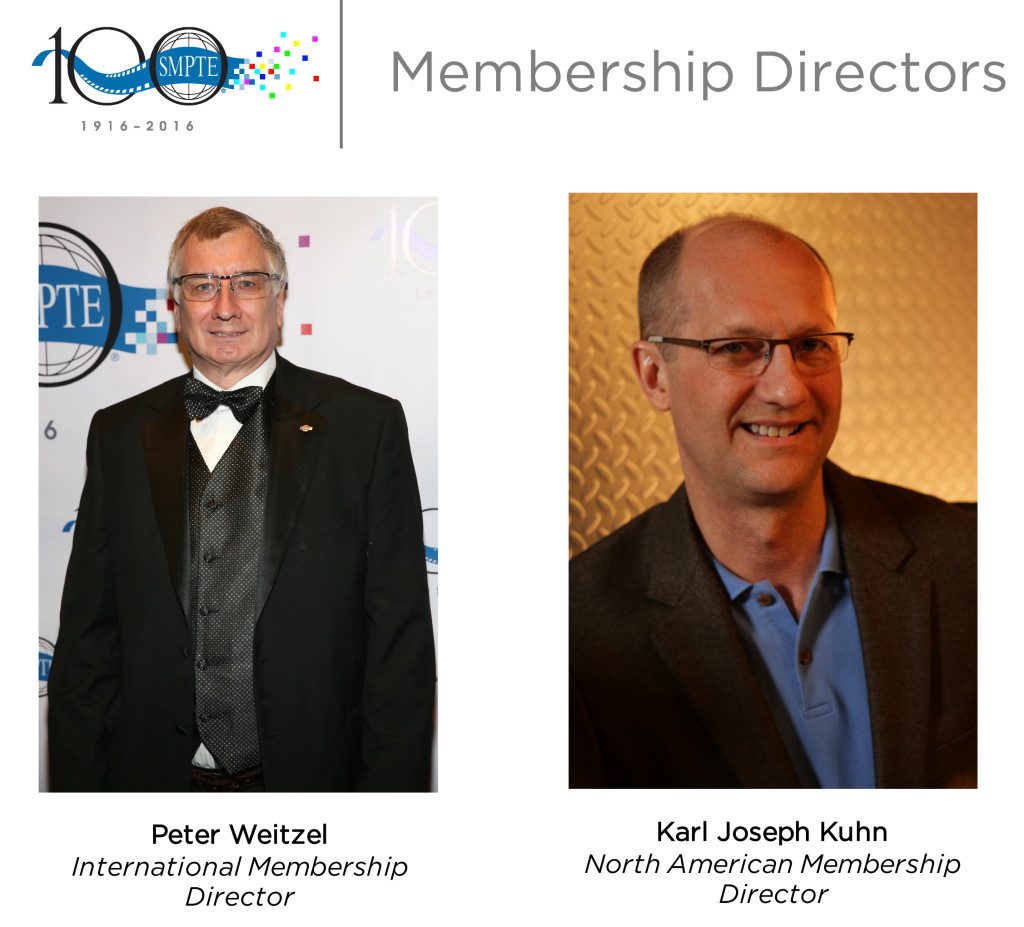 Peter Weitzel, SMPTE International Membership Director
Weitzel consults for broadcasters and small manufacturers, having enjoyed a long and varied career in the “projects” area of broadcasting — from his student days working in BBC local radio and with television outside broadcasters (OBs) to his retirement from Siemens/BBC Technology as a top broadcast strategist and engineer. Since retiring, Weitzel helped re-establish SMPTE in the U.K. and organizes the majority of the two dozen Section meetings held throughout the U.K. each year. He has designed and built television studios, managed teams building central areas, standardized subtitling (and Teletext), developed audio description, and introduced audio over Internet Protocol (IP) to NPR and audio and video over IP to the BBC. He was the project director of the first ultra high definition (UHD) international transmission to International Broadcasting Convention (IBC) in 2008. In 2014, Weitzel was awarded the SMPTE Citation for Outstanding Service to the Society.

Karl Joseph Kuhn, SMPTE North American Membership Director
Kuhn is the senior video systems applications engineer at Tektronix, where he supports digital audio and video, compression, Internet protocol, file-based, and radio frequency test and measurement. He holds three U.S. patents and one Japanese patent that cover in-service testing of digital broadcast video. Kuhn served on the National Academy of Television Arts & Sciences (NATAS) Technical and Engineering Emmy® Committee from 2007 to 2010; he is a SMPTE Fellow and the past chair of the SMPTE Washington, D.C. Section; and he currently serves as the SMPTE Eastern Region governor.

More than 6,000 members — motion-imaging executives, engineers, creative and technology professionals, researchers, scientists, educators, and students — who meet in Sections worldwide, sustain the Society. Through the Society’s partnership with HPA®, this membership is complemented by the professional community of businesses and individuals who provide the expertise, support, tools, and infrastructure for the creation and finishing of motion pictures, television programs, commercials, digital media, and other dynamic media content. Information on joining SMPTE is available at www.smpte.org/join.