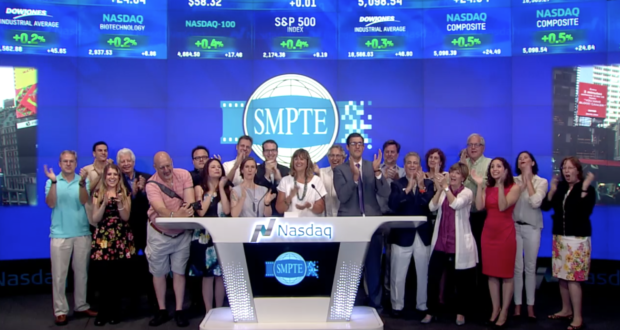 For those of you not in the media trade, SMPTE stands for the “Society of Motion Picture & Television Engineers,” of which I am a proud member, being a post-production studio engineer.

If you missed it, see below:

“The SMPTE Centennial represents a wealth of technical and artistic achievement over the past century, as well as the promise of continued innovation,” said SMPTE President Robert Seidel, vice president of engineering and advanced technology at CBS. “This celebration has been 100 years in the making, and we’re proud to be honoring the accomplishments of our founders and their many noteworthy successors within the Society.”

SMPTE is an organization that was designed to provide a consistency for engineers to conform to when calibrating the productions with which they are associated. For 100 years, SMPTE has been the leader in standards for the motion imaging industry, facilitating interoperability, and therefore business. Standards, recommended practices and engineering guidelines all integrate to describe a particular process; the most important process is known as the timecode.

Timecode, a form of media metadata without which modern videotape editing would not be possible, are added to film, video or audio material to provide a time reference for editing, synchronization and identification. Although primarily for video, they have also been adapted to synchronize music. Once in existence, non-linear editing systems could then allow for programs to be presented as you see them today. SMPTE timecode is a set of standards developed to label individual frames of video or film as defined by the Society of Motion Picture and Television Engineers in their SMPTE 12M specification. The SMPTE standard consists of a two-part document: SMPTE 12M-1 and SMPTE 12M-2, which includes important explanations and clarifications. It is a digital signal of ones and zeroes that becomes an assignment number to every “frame” of video (or sections perceived by the time recording device digitally as frames, due to there being no physical actual “frames” on digital media), representing hours, minutes, seconds, and frames. For example, the time code number 01:05:30:12 represents a picture 1 hour, 5 minutes, 30 seconds and 12 “frames” into the recording.

Video Interview with John Maizels of SMPTE at BroadcastAsia 2016

Founded by C. Francis Jenkins, who also served as president from 1916-1918, SMPE (the “T” was added to the Society in 1950 to accommodate the recently-invented television and its industry) was the solution to the unorganized (soon-to-be) motion picture industry of the early 1900s. At the time, equipment was built according to a manufacturer’s whims, with standard practice nonexistent. Consistency had to exist or the use of imaging for practical applications would fail. With the world on the brink of war, the army saw a need for motion pictures for training and imaging for recording both military events and surveillance. The U.S. government attempted to bring order to this chaotic industry by creating a body to lead development in motion pictures looking to Jenkins as the key, an inventor who developed the first motion picture projector in 1895 (along with Thomas Armat), as well as several unique imaging devices, including an underwater camera and a panoramic camera for aerial views. “The history of SMPTE is almost synonymous with the history of film and television, and it has been a remarkable journey over the past century,” said SMPTE Executive Director Barbara Lange. “Sound and pictures impact the human experience, which means that masses of people have enjoyed the benefits of SMPTE‘s work. With our recognition of SMPTE‘s Founders’ Day and its incorporation date, we pay tribute to the many pioneers who have volunteered behind the scenes to enable the rich visual storytelling that we all enjoy.”

During the spring of 1915, the Boardwalk of Atlantic City hosted a trio consisting of Jenkins, E.K. Gillett, and N.I. Brown who would be the answer to the problem. A year later, in July of 1916, a total of ten engineers came to a unanimous decision to create a society of engineering specialists in the motion picture field, for which a constitution was drafted. The constitution was ratified in October of 1916, committees were established, and the SMPE society was born, with Jenkins as its first chairman and president.

Today, SMPTE members exist in over 64 countries worldwide; SMPTE itself is recognized as the global leader in the development of standards and authoritative practices for film, television, video and multimedia. Over 250 Sustaining (institutional) Members belong to SMPTE, including: Apple, Amazon, Blackmagic Design, CBS, Deluxe Technicolor, Disney/ABC/ESPN, Dolby Laboratories, Ericsson, Fox Entertainment Group, Google, Microsoft, NBC Universal, Netflix, Nokia, Panasonic, Paramount Pictures, Sony, Turner, and Warner Bros., who, along with the 7,000+ individual members, work to bring the best media experience via every outlet possible today, branching-out so as to reach even the smallest media imaging niche. Now present in every discipline, their members include engineers, technical directors, cameramen, editors, technicians, manufacturers, designers, educators, consultants and field users in networking, compression, encryption and any other field employing images. They stay one step ahead of technology via their frequent technical conferences and seminars, which encourage useful interaction and information exchange. I am an active and proud member of SMPTE. Not only do I respect this time-honored organization, but I am grateful — they embrace and support all of their members in a way that has been lost in most major societies of today. Employing every mode of media, they even use Twitter to reach-out (in fact, as proof of their support of their members, my comments, Tweets and other material is re-tweeted by them on a regular basis!)

So, to all of my dear friends at SMPTE – Happy Centennial…Happy Birthday! Here’s to another 100!