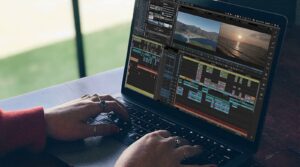 More than being a technical process, editing of both audio and video are art forms. Each requires artistic skill far beyond the technical prowess to operate editing equipment. They require the intuition of a good storyteller.

New editors often make some common mistakes that need to be overcome. Here are a few:

Before starting an editing project, it is best to plan the story and determine in advance how to tell it. Don’t just jump in. Too many editors don’t think before they begin. If you are to tell a compelling story in your video, map out the visual and sound elements in advance.

It is important to spell out the goal of any video before editing begins. Make sure all the elements have been assembled to bring that vision to fruition. It sounds very basic, but many editors don’t think a project through before starting. This reveals flaws in the final video story.

Don’t get hooked on a certain type of visual transition. It is easy to have favorites and too frequent a use of the similar effects becomes visually boring to viewers. Also, pay attention to the pacing of the story. A shot that is too long or too short can either bore or jar the viewer. Understand the rhythm of a good story and pay attention to it as the editing progresses.

Part of this process is not using long sound bites without some form of visual cover. Otherwise, the interest of the viewer will be dulled. Occasionally cut away from the long “talking head” shot. Develop the discipline to cut sound bites to their essence. Avoid using lengthy sound bites to tell a visual story. Turn the sound off and watch your video to make sure the story is still moving along in silence.

A cheap short cut often used in YouTube videos is the jump cut. In the old days, using a jump cut was a real “no-no” done only by amateurs. It was a lazy form of post-production. Avoid jump cuts, though they are now stylish. Such shots should be covered with B-roll or graphics. This means the camera operator has to acquire those shots on location. Make sure that happens.

Always remember that video is above all a visual medium. Graphics are the video editor’s friend. It is always best to have a graphic designer working on a video story, but sometimes the budget doesn’t allow that. Without such an expert, the editor must find and use visual elements that propel the story.

Be careful not to repeat the same graphics. It’s a habit that some editors without graphic skills sometimes get into. Every visual should be original and used purposely to further the story. Don’t try to create your own graphics if you don’t know how. Amateur graphics always stick out. When in doubt, use visuals from a stock library.

It’s the same rule with special effects. In the early days of effects, we all saw editors using the latest gee-whiz effects repeatedly. They thought it was cool, but the story was weighed down with useless gadget-type imagery. A good effect adds a genuine element to the story. A talented editor uses effects sparingly.

If an editor is not working with a sound designer or engineer who has created a professional sound track, he or she still has to work with audio and make it sound professional. Audio is just as important as video in driving the narrative of a story. Make sure in the end that audio levels are mixed well and the loudness levels are even. It is difficult for one person to be responsible for the sound and video, but it is an essential task for a smooth show.

With rapid changes in video and audio technology, the editor must be on top of the changes in the workflow. Make sure you are editing in the highest quality formats for both the video and audio. You want to always use the best resolution your equipment can handle.

For editors learning the craft, be careful where you get your information. Online tutorials can be good or provide you with very bad advice. These videos are the wild west of questionable information. Choose your teachers carefully.

Outside of learning to use a certain type of edit system and its operating software, every editor needs to also learn the art of visual storytelling. Just cutting shots, using special effects and repurposing video footage is not nearly enough. Telling a powerful story is everything.

The art of visual montage is an expansive subject with many pioneers who have brought major developments to the art form through the years. Every editor should study these tried-and-true visual techniques and incorporate what they learn into their work.

A video editor’s job is both technical and artistic. There are plenty of good technical editors, but far fewer who can work the visual magic to tell a convincing visual story. Every image and sound selected must go toward advancing the narrative. That’s when an editor is doing a good job.