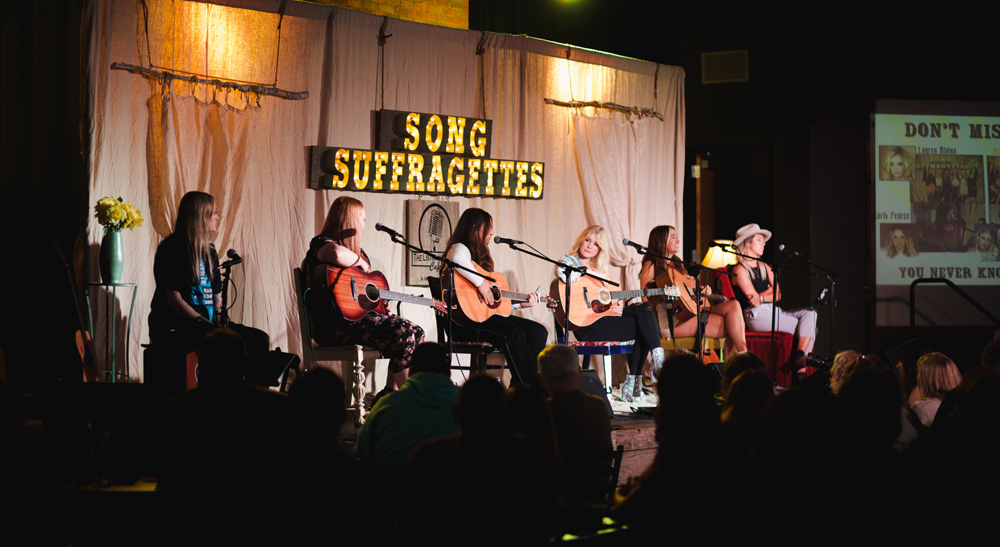 Founded in 2014 by Nashville music executive Todd Cassetty, Song Suffragettes aims to fight systemic gender disparity in the music industry by increasing opportunities and airplay for female country singers. With a rotating group of performers, each live streamed show features five female songwriters with a cover performed at the end by all five women. Now in its ninth year, Song Suffragettes has seen more than 350 women grace its stage, with almost 60 going on to land publishing deals and 26 earning recording contracts. Its most notable alumni include Kelsea Ballerini, GAYLE, Carly Pearce, Lainey Wilson and Tenille Arts.

“Before building our Blackmagic workflow, we’d have to take the mixed format footage and painstakingly edit performances together after each show,” said Cassetty. “Now with our Blackmagic gear, we can live stream in real time and record our live stream cuts. We have a full show edit available immediately and can quickly cut up individual performances and post them on YouTube and other social media channels.”

Song Suffragettes uses a Pocket Cinema Camera 6K G2 and three Pocket Cinema Camera 6Ks, all of which are fed into an ATEM Mini Pro monitored by a Blackmagic Video Assist 7” 3G monitor/recorder. The livestream edit is recorded directly from the switcher to an external SSD as are the individual camera recordings. After each weekly live stream, the show is posted to the Song Suffragettes YouTube channel in its entirety. The team also chooses three or four standout songs after every show and posts those videos to YouTube from the individually recorded camera feeds.

“I chose the Pocket Cinema Camera 6Ks because I had heard so many good things about the quality of the footage capture,” noted Cassetty. “I also like how you can record directly out of the camera in real time to an SSD. We recently added one of the Pocket Cinema Camera 6K G2s, and we love the adjustable touchscreen screen for easier framing of shots, as well as the level of control with onscreen focus and exposure tools. With the larger Super 35 sensor, the image quality is even better because of the shallower depth of field. If we ever add post production back into our workflow or want to explore the world of vlogging or filmmaking, the camera’s capability to record gyro data from the internal motion sensor will be extremely helpful in stabilizing the footage. It’s an impressive built in feature.”

He continued, “We love that we can adjust the cameras’ settings in real time using the ATEM Mini Pro which comes in handy because our stage lighting is not always as even as we’d like. In addition to using the ‘gain’ adjustment at some point during every show, we also take full advantage of being able to add graphics into our live stream in real time using macros.”

Cassetty concluded, “YouTube is an important platform for our brand, and we post hundreds of singer/songwriter performances on our channel. Building out a Blackmagic-based workflow for Song Suffragettes was one of the best decisions we’ve ever made.”