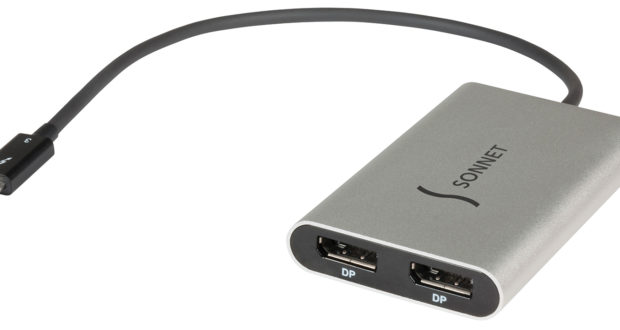 Desktop computer users can enjoy the benefits of working with multiple monitors without having to connect to multiple ports on the computer. For many users of thin and light notebook computers wanting to connect two large UHD monitors, an adapter to connect them is required — most laptop and notebook computers lack the DP ports featured on UHD monitors. Sonnet’s Thunderbolt 3 to Dual DisplayPort Adapter is a plug-and-play solution for adding dual DP port connectivity to most computers with Thunderbolt 3 ports. Users simply plug in the Sonnet adapter to their computers, connect the monitors with standard DP cables (sold separately), and then configure the displays through the operating system.

Although the Sonnet Thunderbolt 3 to Dual DisplayPort Adapter supports up to two 4K DP monitors at 60 hertz or one 5K DP monitor at 60 hertz, it also supports monitors with lower resolutions, such as full HD 1080p (1920 x 1080) and 1920 x 1200, making it well-suited for different home and office workspace applications. Plus, the Sonnet adapter’s built-in audio support ensures that there’s no need to connect additional cables to hear sound from the monitors. For added convenience, the Sonnet adapter is also compatible with “active” DP-to-HDMI, DP-to-DVI, and DP-to-VGA adapters, enabling the connection of a wider variety of monitors.

The Sonnet Thunderbolt 3 to Dual DisplayPort Adapter (part number TB3-DDP4K) is available now with an MSRP of $79. More information on this product is available at www.sonnettech.com/product/thunderbolt3-dual-displayport-adapter.html.

More information on Sonnet and its other products is available at www.sonnettech.com.

About Sonnet Technologies
Sonnet Technologies Inc. is a leading provider of Thunderbolt(TM) 3 to PCIe(R) card expansion systems; external graphics (eGFX) solutions for pro users and gamers; pro media readers; docks and adapters; and network, storage, and other interface cards for pro users in the audio, video, and broadcast industries. Sonnet’s Thunderbolt expansion products enable the use of pro audio I/O and DSP cards, pro video capture and transcoding cards, GPU cards, network and storage interface cards, and other high-performance PCIe cards with Thunderbolt technology-enabled computers. For 30 years Sonnet has pioneered and brought to market innovative and award-winning products that enhance the performance and connectivity of Mac(R), Windows(R), and other industry-standard computers. More information is available at www.sonnettech.com.

For your convenience, links to French, Japanese, and Spanish translations have been provided.