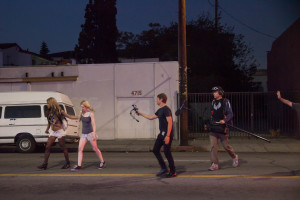 LOS ANGELES, JULY 6, 2015 – When veteran Sound Mixer Irin Strauss was tasked with capturing audio for one of the most talked-about indie films of the year, Tangerine, he turned to the 664 Production Mixer, made by Sound Devices, specialists in portable audio and video products for field production. 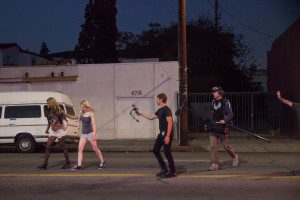 Tangerine is a comedy-drama about a woman who searches throughout Hollywood for the pimp who broke her heart and the girl with whom he cheated. The film was shot on two Apple iPhone5s, requiring Strauss to choose highly compact, mobile equipment in order to keep up with the film crew. 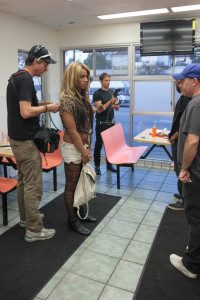 “For Tangerine, two cameramen were running around with phones, allowing us to quickly shoot in certain locations, almost undetected,” says Strauss. “As the sound guy and the boom operator, I had the most to carry. Having the mixer and recorder in one machine proved invaluable for this project, as it was one less thing to carry.”

Armed with his Sound Devices 664, purchased from Gotham Sound, Strauss was able to keep up with the two iPhone 5 operators. For the narrative dialogue, he put everything onto one track, with straight ISOs for everybody else, who were wired most of the time. He would also mix the boom and the wired tracks when necessary. 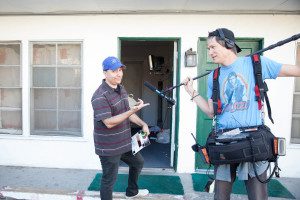 “We weren’t really sure how things would pan out, shooting an entire film using just iPhones, and since the pace was so fast, there wasn’t time to create sound reports, so I really had to rely on the metadata from the 664,” says Strauss. “In addition, using the 664 made monitoring each individual track very easy and convenient.”

The smart phone camera setup also included Moondog Labs’ 1.33x anamorphic adapter and the FiLMiC Pro app. In addition to his 664, Strauss used a Lectrosonics SMV wireless system for his transmitters, along with Sanken COS-11D lavaliers. He employed a Schoeps CMIT5U shotgun microphone and, occasionally, a T-powered Schoeps CMC 4U for locations with low ceilings and little head room.

“This was probably the most challenging project I have ever worked on, as it was not easy to keep up with two guys with iPhones,” says Strauss. “They would just grab their phones and start shooting. Since there weren’t any monitors, I had to make my best guess about what the shots were and how they aligned them. The 664 was really an excellent choice for this fast-paced production. It is a great piece of equipment.”

As a loyal Sound Devices user and customer since the company’s formation, Strauss adds, “from tech to customer service, the company has always been top notch; professional and a pleasure to work with.”

The 664 features six ultra-low noise, high dynamic range transformer-less preamps that accept mic- or line-level signals and include analog peak limiters, high-pass filters, input trim control and direct outputs on every channel. Direct outputs for input channels 1-6 can be switched to six line inputs (7-12) for a total of 12 inputs. The 664 records up to 16 tracks of 16- or 24-bit broadcast WAV files to SD and/or CompactFlash cards. All inputs and outputs are individually selectable for recording, enabling the mixer to record up to 12 ISO and four mix tracks. With its dual card slots, the 664 can record WAV or MP3 content to either or both cards simultaneously, with the added ability to assign different tracks to each memory card.