The 970 records to up to four attached drives, which include two front-panel drive caddies and two rear-panel e-SATA connected drives. Material can be recorded to multiple drives simultaneously or sequentially. This eliminates time-consuming post-record copying and allows for continuous long-form, high-track count recordings. 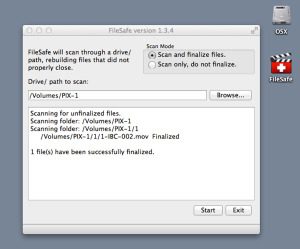 FileSafe, which automatically detects and repairs corrupted file headers when drives are mounted, is incorporated directly into the 970. During recording, data is written to a proprietary Sound Devices file format optimized for high-data rate, real-time audio recording using an ‘.sda’ file extension. When a recording ends, files are automatically “finalized” by converting the ‘.sda’ files to standard ‘.wav’ files. In the event that files cannot be finalized, whether due to power loss or inadvertent drive disconnection, they still remain intact on the drive. Users can recover these files by simply inserting the drive back into the 970. In the absence of the 970, the FileSafe Mac or PC utility, available as a free download (www.sounddevices.com/products/filesafe/), can be used to recover files that have not been finalized.

In addition to RS-422 and GPIO control, the Sound Devices 970 features an embedded Web-based control panel for remote transport and setup control from any browser-enabled device as well as the ability to remotely instigate file transfer over Gigabit Ethernet with SMB. In mission-critical audio-over-IP AV installations, where hundreds of audio channels are distributed between zones, the ability to setup a redundant Dante network to protect against loss of audio due to network failure provides peace of mind. The ability to have one drive transferring files over Ethernet, while another continues recording, offers significant production time savings.

Users can perform fast file metadata editing of scene name, take number, notes, track names, circle status and reel folders during, before and after recording across all drives. Metadata is stored in industry standard Broadcast Wave iXML and bEXT containers.

With its vast array of input and output types, the 970 allows for live conversion between analog, AES digital, MADI and Dante, acting as a bridge and routing matrix between these types of audio I/O. The built-in, rock-steady Ambient Recording Lockit time-code technology makes the 970 well suited to operate as a master clock. It can also slave or be jammed to any other time-code source. All common production time-code rates and modes are supported. The 970 also supports external synchronization from word clock, MADI or AES. To simplify the connection of multiple digital inputs, SRCs are available for all MADI, Dante or AES inputs.

Sound Devices 970 is designed with a large five-inch screen for large, easy-to-read, full scale metering of up to 64 tracks and for fast and intuitive menu control. It also features the Sound Devices proprietary PowerSafe technology. PowerSafe circuitry has a built-in 10-second power reserve. In the event of power loss, the unit continues to operate for up to 10 seconds, then stops any file operation and shuts down. This ensures that a complete power loss has no effect on the recording.

Founded in 1998, the company designs and manufactures both brands from their Reedsburg, Wisconsin headquarters with additional offices in Madison, WI. For more information, visit the Sound Devices and Video Devices websites, www.sounddevices.com; www.videodevices.com.