Several audio features have been added to the entire rack-mount line including an updated visual identifier for disarmed tracks. Now, audio metering will appear grey whenever a track is disarmed. In addition, peak hold time is customizable, allowing the user to set peak hold at one- to five-seconds, based on preference, along with the ability to shut this feature off entirely. Two more audio features include noise reduction for incoming video signals and fast track arming. 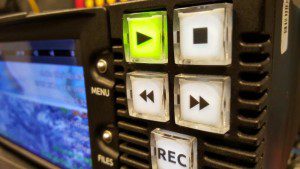 For 970 and 270i users, there is a new Dante setting menu for configuring Dante redundancy, and primary and secondary IP parameters direct from the unit. Also applicable for 970 and 270i, all metadata edits ripple to grouped recorders for previous, current, and next takes including scene, take, notes, track names, circle status, false takes, and scene increments. This signifies the most advanced sharing of metadata between a master recorder and its backup, making the backup recorder a true mirror of the master.

There are several timecode synchronization enhancements for the PIX 270i, including the ability to customize timing offsets from the house reference. In stop mode, there is also a new feature where black is output from SDI and HDMI outputs. This is a key benefit to broadcasters who want to maintain a glitch-free synchronous output when switching between stop and playback. With firmware v2.20, PIX 270i users can also adjust the timing offset of video playback, either horizontal and/or vertical, relative to the incoming sync input.

Additional playback features for the PIX 270i include seamless playback of video and audio across files of the same file res-rate and codec. This is ideal for the playback of file-split recordings or playlists. The company has incorporated several cross-product compatibilities into this firmware as well, such as the ability for the PIX 270i and 970 to playback multichannel .wav files recorded using Sound Devices 6- and 7-Series products, or files edited via Pro Tools®, Adobe Audition®, or Audacity®. On the video side, both the PIX 270i and PIX 250i now support playback of Apple® ProRes 422 and 4444 .mov files from Video Devices PIX-E5 and PIX-E5H recording monitors. The PIX 270i also supports playback of non-native ProRes and DNxHD® QuickTime .mov files with up to 16 audio streams from non-linear editors including Avid®, Final Cut Pro®, and Adobe Premier®.

On all rack-mount products, false takes are now moved into a dedicated false takes folder instead of being deleted. This allows users to re-access such files, if necessary. The web interface, PIXNET, has also seen some significant enhancements, including the ability to mark a take as a false take, generate and download sound reports, and manage phrase lists, all directly from the PIXNET.

Firmware for the rack-mount products is now available for free download:

Many features, changes, and fixes in this firmware update also apply to the discontinued PIX 260i video deck, which is still in use in many production applications worldwide. Its download is available at: www.videodevices.com/support/downloads/pix260i-firmware