ALBERTA, CANADA, AUGUST 23, 2016 — Production Sound Mixer David Husby has had a decade filled with big-name projects, notably X-Men: The Last Stand, Rise of the Planet of the Apes, Tomorrowland, The A-Team, Tooth Fairy, and The Big Year. More recently, he has worked on Star Trek Beyond, Deadpool, and The Solutrean, an upcoming historical action drama from production company Studio 8, directed by Albert Hughes. 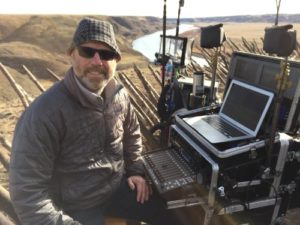 Husby, always a proud early adopter of technology, was excited to upgrade from his established equipment, which had served its purpose on scores of jobs, many in harsh field environments. The changeover was also in response to the need for additional inputs required for many of today’s Hollywood projects. 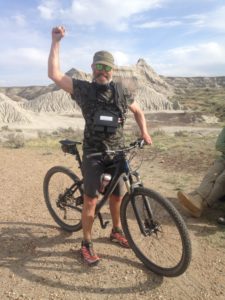 “I really wish I could have made the transition from the 788T to the 688 six months sooner,” says Husby. “With the 788T, working around eight inputs was challenging now and then on Star Trek because it was such a large ensemble cast. Having a few more inputs was something that just had to happen in this day and age, and the 688 with its 12 inputs answers that concern. It was an easy choice to make. I’ve been crossing my fingers hoping that this would come out for some time, and I was thrilled shortly after its announcement that Sound Devices came out with the CL-12, too.”

While Husby likes the attractive wood panels on his CL-12 Alaia, he’s most excited about the P&G faders. “I have the P&G faders, and I’ll always pay for a significant upgrade like that. I expect that with the CL-12 Alaia, I’ll have plenty of years with the P&G faders. It is going to be a very durable device because I can pull it apart and get it clean. They are truly built for the road.”

The features of his new Sound Devices 688 mixer/recorder and CL-12 linear fader controller are currently proving themselves on The Solutrean, a survival tale where a young earlyman played by Kodi Smit-McPhee, who plays Nightcrawler in the current X-Men movies, makes a journey into manhood, shot almost exclusively in the unaltered vast landscapes of the Canadian wilderness. 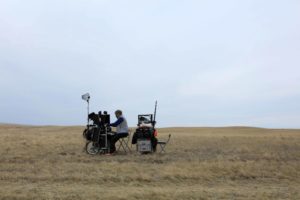 For this project there is a need for soundscapes that are time-relevant, and Husby spent a lot of time looking at the rough cuts before heading out into the wilds of nature to find interesting things to record. “I headed out with my compact Sound Devices 633 strapped around a rig in front of my chest, and then I’d go off on my mountain bike in the middle of nowhere and capture what I could in terms of soundscapes that are going to work with the film. I had to ensure that there were no audio signs of the modern world in the background of any of my recordings.

“I’m loving my new ultra portable setup: the little 633 with a couple of little LL batteries on it, along with my favorite MS set-up (Sennheiser MKH 50 and MKH 30 mics) make a pretty formidable system and in such an elegant little package. The depth and resolution those microphones offer, captured on the 633; it just can’t be matched.”

His CL-12 linear fader controller recently got an actual trial-by-fire use in the dusty outback of Alberta, Canada, while capturing sound for The Solutrean. “We started out working in an environment that was extremely dry and windy, and all kinds of dirty, sandy stuff from the Fort McMurray fire was affecting us. This airborne material was getting all inside the faders. On the CL-12’s first show this was just kind of tragic for it to get so filthy right out of the box. But it survived quite well and I am sure it has plenty of movies to go before it needs a major service.”

Survivability for field shoots is a big part of the CL-12 and 688 combination for Husby, but features and sound quality are also key. “I am impressed with the whole system. It is very elegant and compact, and straightforward and intuitive in its design.”

For his recent work on Deadpool, his audio had to capture the extreme dynamism of lead actor Ryan Reynolds. “He’s all over the map, and we want it that way because that’s his character. But from a whisper to a scream I could be absolutely accurate with my control surface.”

Additionally, Husby said his kit was perfect for scenes like the big car chase that had to be shot on a tight schedule, with two wireless mics on Reynolds. “We only had six hours up on the Interstate Highway to get that part of the shoot done. I had to have everything together because there’s no time to run and go get anything. Having a portable, very compact system that I could absolutely count on, and having a wide enough dynamic range to facilitate Ryan Reynolds, was important. It all came out really well; I’m very proud of that movie.”

The attributes of Sound Devices’ equipment have been important for Husby since 2008, when he bought his first 788T for use on The A-Team. “I have been using Sound Devices mixer/recorders exclusively since The A-Team. With my latest transition to their 6-Series products, with two 688s and a 633, I couldn’t be happier. Sound Devices has always been extremely quick to respond to feature suggestions or if there are ever any technical issues. I very much appreciate that.”