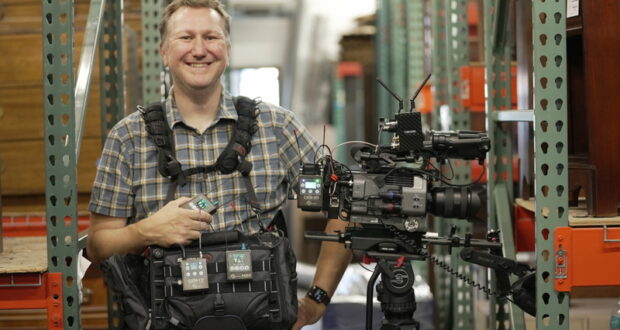 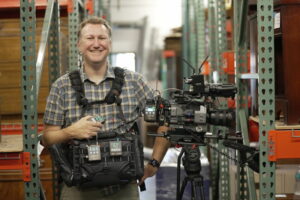 Chicago, IL (September 20, 2021) — Soon to be airing on HGTV, Renovation Goldmine follows hosts Joe and Meg Piercy as they breathe new life into properties in and around Chicagoland. The couple’s business, MegMade, upcycles furnishings found in their clients’ homes, saving them money for remodeling the structures themselves. Matt Vogel, whose production credits also include The Oprah Winfrey Show and Bizarre Foods with Andrew Zimmern, mixes the show using his own goldmine of Lectrosonics wireless. Four SMQV and two LT transmitters paired with three SRc dual-channel receivers handle talent mics, and an all-digital DCHT transmits a feed which is then picked up by a DCHR receiver used as a camera hop plus three M2R belt-pack receivers for the producers’ in-ear IFB mix.

The environment on location made Lectrosonics’ well-known durability a must. “The biggest challenge with home renovation shows is that they’re loud, dirty, and sweaty,” says Vogel. “We shot in the summer heat and our hosts were knocking down walls, cutting lumber, sweating through their outfits, and creating a lot of dust in the air. air. Nothing was scripted, cameras needed to follow talent through construction obstacles while covering multiple rooms, and booming the scene would have completely gotten in the way. As a result, wireless was the primary audio source, and I was rarely in the same room as the talent.”

Repeating these conditions in multiple homes meant Vogel had to make the most of the region’s tight frequency spectrum. “Since the repackaging of frequency blocks in Chicago, it has been increasingly difficult to coordinate wireless devices,” he explains. “Plus, we’re switching locations several times per day, making things even harder. With up to five lavs on the talent, two camera hop feeds, and an IFB feed, I was using up to eight frequencies at the same time. This is why I switched to Lectrosonics digital systems for my camera hops and IFBs.”

Specifically, Vogel leverages the compatibility between the all-digital DCHT and DCHR and the M2R receivers, which employ Lectrosonics’ time-tested Digital Hybrid Wireless technology. “With the DCHT, DHCR, and M2R units, I essentially took three frequencies and combined them into one,” he details. “My DCHT is in my audio bag and sends two channels of digital audio to the DCHR, giving me a left-right camera mix over a single radio frequency. The M2Rs receive the same frequency from the DCHT, giving the producers the option to hear the stereo camera mix, or fold it down to a mono mix if they’d prefer to listen through just one headphone. When we have multiple cameras on set, I use extra M2Rs as camera hops. The interchangeable workflow is very handy.”

Just as handy is the frequency range of the M2Rs and their ability to adapt quickly when the RF environment changes on a dime. “I also love having the entire UHF wideband available in a single unit,” says Vogel. “This gives me the flexibility of moving my hops and IFB far away from my talent mics. Being able to change those frequencies and those of the transmitters by using the infrared ports, instead of manually dialing them in, is also a huge time saver on set.”

When a production is as mobile as Renovation Goldmine, every ounce of equipment is felt, especially if you’re the one holding the camera. Vogel found Lectrosonics a bonus for the camera hop application, in which a receiver placed on each camera ensures its onboard audio channels capture the same signal as the recorder in his audio bag: “I previously used SRBs for hops, and when my camera operators saw the difference in the size and weight of the DCHR, they were thrilled. Being able to use AA batteries or external power are great options for me, too.”

If there are problems hearing the talent, producers and directors are notoriously uninterested in why — they just want things to work. Vogel’s hybrid configuration has delivered the goods and made any awkward explanations unnecessary. “The sound quality of the M2Rs is far superior to any other IFB system I’ve used,” he praises. “Producers have commented on how clear it is, and I never have clients asking, ‘Did you hear that?’ because the IFB signal took some kind of hit.”

All this performance under fire is consistent with what Vogel has come to expect from Lectrosonics over the course of his lengthy career. “I first learned about wireless gear as an audio assistant for a documentary film company, and began using Lectrosonics 20 years ago,” he recalls. “So, I’ve seen the evolution of the technology firsthand. Starting with the 185-series receivers and transmitters, then moving to the 200s, then the UCR-411s, and all the multiple versions of SR receivers, I’ve relied on Lectrosonics for all my wireless. I need gear that works in difficult RF areas of the city, and it also has to be durable and not break down when I’m facing extreme environmental elements on things like documentary shoots and renovation shows.”

Vogel also points to Lectrosonics’ customer service with one anecdote he says exemplifies the company’s personal and attentive approach: “I was working on a food show in Albuquerque and needed to have the keypad on one of my SRBs repaired. Realizing that Rio Rancho was a short drive away, I figured I’d just drop it at their doorstep. [VP of Sales and Marketing] Karl Winkler met me at the door and gave me a VIP tour of the whole facility. It was really cool seeing how their products are assembled right there. Lectrosonics has always fit the bill for me, and I don’t see myself ever switching.”