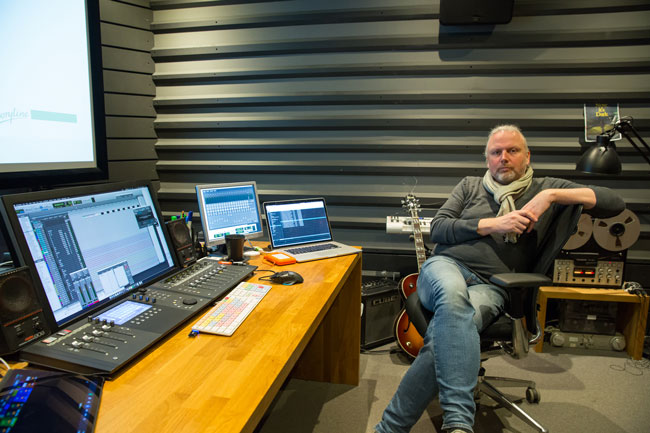 For Gisle Tveito, a 26-year veteran, supervising sound editor, dubbing mixer, and one of the owners of Storyline, getting the sound design process to run closer to parallel with the video editing process has always been a goal. While many sound departments wait for ‘picture-lock” before starting to work on the sound, the team at Storyline is breaking the mold of the traditional serial workflow by closely aligning audio with video editors from the first cut.

Before Soundly, audio was organized by each contributor, based on what made sense to them. Using file names, folder names, dates etc., each contributor, whether it was the composer, editor or assistant, had their own organizational system, which could quickly get confusing.

Using Soundly solved a lot of housekeeping issues with all the audio that gets passed around in a large production. Being cloud-based, there are far fewer copies of any given audio clip, and everyone has access to the latest version in a single, central location. The Storyline team had tried Dropbox, ftp, and other methods for sharing files, but none were as streamlined, intuitive, and integrated as Soundly.

“Directors that I frequently work with consider me part of the initial editing process. With Soundly, it’s a more collaborative way of working for all of us,” says Tveito. “To have music and SFX in one database where everyone can access the same things makes communication so much easier.”

Tveito has a multi-user Soundly account with 10 licenses that he can administer as he likes. For the recently finished Norwegian TV series Valkyrien, consisting of eight 45 minute episodes, the whole production took 2 years from the start of the shoot until the last mix was done. In this case, the sound department and the composer were on board during the last 13-14 months.

“For that series, there were three producers with their own Soundly accounts, four editors with accounts, and the composers and me, as leader of the sound department, with accounts,” says Tveito. “Everyone was part of the creative team and the producers just loved it because it was a huge timesaver. I remember doing some music editing for the trailers, and I would just drop that into Soundly and send an email saying new versions were available.”

“Everyone could instantly play back the versions, and compare to the original music. Instead of worrying about how to download it, where they should put it on their computer, or how to keep the versions organized, the latest version was always available in the cloud. I would get some feedback in five to ten minutes,” says Tveito.

The production was shooting a scene in the studio, but the scene took place underground, in the subway system. Tveito and crew went out and did some advance recording to create a huge library of sound effects of passing trains that would make the studio set come alive. “I prepared the sound so it was available for the editors from day one. They had great ambiances and great SFX they could use from the very start. We also played back some of the sound effects, like passing trains, during the shoot in the studio, just to make some noise for the actors to react to. Everything was accessible to everyone, including the sound recordists in the studio,” says Tveito.

The picture editors at Storyline think it’s great to have access to the Soundly SFX library as well. In addition to what Tveito provides, the Avid editors use Soundly to quickly search for their own sounds too. “It’s fast and easy for them to drag and drop SFX to a bin when they are working on rough cuts. They use Soundly to search the massive online catalog at FreeSound.org as well. A lot of people appreciate having it organized under one tool.”

Tveito says that working in parallel can create many obstacles. Without the correct tools, it can feel like extra work. He admits that the workflow is not for everybody, but, for those willing to get ahead of the game, the rewards can be delivering a higher quality result and greater creative participation across the team.

“You have to find the tools to make the obstacles as small as possible. Soundly is one of those tools. It’s so easy to make things look nice and organized. Audio is always available. You just log on from wherever you are. If you move to another room, another facility, even another company, you can keep on editing since the audio is still there, still online for you,” concludes Tveito.