The true art form of sound design is definitely noticeable when watching movies in 5.1 surround sound. The art of creating, tracking, mixing, and mastering is truly inspiring when a team of sound designers work together in joining magnificent blended visuals with custom organic sounds which gives the viewer a memorable experience while eating their popcorn and candy in a dark movie house.   The folks at Sony Pictures Post Production Services constructed a veteran sound team to  complement one of the biggest blockbuster movies within the past 5 years “Spider-Man: Homecoming” , that in the first six-days of it’s release totaled to $154.1m in North America (alone) and to date over $220 million!

The reboot of this iconic superhero action film by Columbia Pictures and Marvel Studios provided for an interesting assortment of characters, movie magic gadgetry, and lots and lots of action that certainly had the sound design team’s imagination and creativeness at full speed. “It was a high-octane crew,” says Ticknor. “As a team, we blended well, everyone contributed and the ideas flowed seamlessly.”

For example, the newly created Tony Stark designed web-slinger’s costume was retro-fitted with a detachable drone 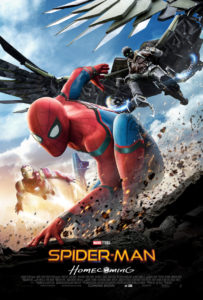 and required a different approach in the art of foley. “It was an interesting challenge to create the sound for the drone,” recalls Norris. “Steve came up with the idea of using a toy noisemaker that produces a high-pitched whistle. We used that and a palette of other effects to give the drone its personality.” Of course, in the movie we have the older Spider-Man suit which had it’s own sound specialty. “Jon Watts wanted the web coming from the old suit to sound a little less modern than the web that shoots from the new Stark suit, which is hot and cool,” notes Ticknor. “We ordered a couple of 5,000-foot rolls of magnetic tape and let them unravel. They created a whooshing sound that became our old-school web.”

Another character that imposed a challenge to the team (who of course “took it in stride”) was the super villain Vulture and his winged suit which is equipped with ever changing devices from metal feathers and wings, and jet turbine engines! “We used samplers to stack sounds together, and shape them to create a sense of movement that mirrored the action on the screen,” explains Lamberti. “It was a lot of fun!”

Go check out Spider-Man: Homecoming if not to satisfy your inner adolescent, but to experience crafty sound designers with a passion for their profession!