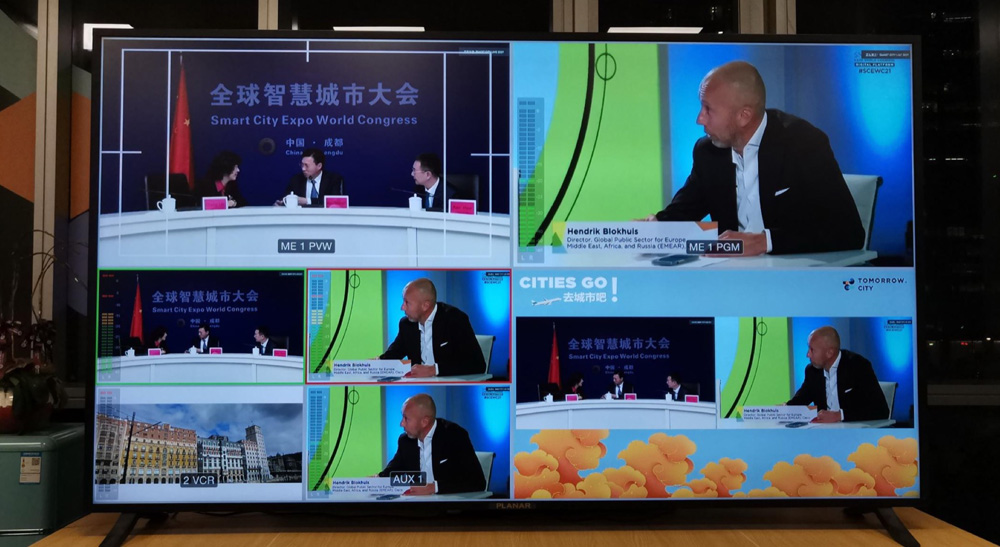 Held in Barcelona since 2011, Smart City Expo World Congress (SCEWC) is the international leading event for cities, with a mission to empower cities and collectivize urban innovation across the globe.

In addition to the in-person show at the main venue in Barcelona, the SCEWC organizers also produced a digital program that included online interviews with experts and industry leaders from cities around the globe. A production studio was set up on SCEWC 2021’s show floor in Barcelona, where the host talked to interviewees or speakers on site or over the internet.

SRTVMIX was commissioned to mix the feeds between the production studio in Barcelona and speakers in Chinese cities, allowing the studio to handle just the feeds from SRTVMIX in Shanghai, instead of handling too many feeds from various cities at the same time.

“There were 18 video feeds for us to mix including 16 feeds from the Chinese cities and two feeds from Barcelona. Also, because the host in Barcelona spoke English and the speakers in China spoke Mandarin, there was simultaneous interpreting going on. Apart from mixing the video and audio feeds, we also needed to take care of graphics work and the project had to run flawlessly for two days. We chose the ATEM Constellation 8K for its loads of video and audio connections and powerful graphics features as well as reliability,” said Hu Jiazhang, technical director of SRTVMIX.

The MADI connections on the ATEM Constellation 8K further reduced the complexity and cost by eliminating the need for external audio de-embedders and embedders. “For audio, all we needed to do was get the 18 SDI feeds directly into the ATEM Constellation 8K and connect the MADI out on the switcher to the MADI in on the audio mixer, instead of installing an audio de-embedder for each of the 18 connections,” said Hu.

SRTVMIX also made the most of the two SuperSource processors of the ATEM Constellation 8K to make life much easier. “When a speaker was doing the presentation, we needed to cut between two layouts, with one where the sizes of the speaker box and the presentation slides box were the same and the other layout where the sizes of the boxes were different. We customized the two layouts in the ATEM Software Control ahead of time and assigned them to specific buttons on the ATEM Advanced Control Panel, so we could get the two layouts quickly with just a press of a button. We could have done this with macros too, but with SuperSource the possibility of making mistakes was minimal even when things got hectic, and we were able to add more visual elements to the image so it looked more appealing,” said Hu.

The HyperDeck Studio 4K Pro was used to record the master. “I ordered this recorder as soon as it was available because now more and more clients are asking us to deliver 4K projects in H.265, since it offers high resolution in small sizes,” said Hu. “Another feature I like is the built-in speaker and a monitoring jack. However, as a technical director, the headset I wear is mostly for me to talk to camera operators, and in noisy environments, I often use the Blackmagic Audio Monitor 12G for monitoring.”

The company has also built a workstation with three DeckLink 8K Pro capture and playback cards and streaming software, which serves as a switcher for low-budget projects or a character generator when working with ATEM switchers.

SRTVMIX puts each of its live production systems in a flight case and equips the cases with temperature and noise control to further enhance reliability. “In April 2020, we started getting a great number of projects from government clients to facilitate work and business resumption after the outbreak of COVID-19. From April through July, we almost got to complete one project each week. With every project lasting three or four days plus rehearsals, our Blackmagic Design systems seemed to work around the clock but never failed us due to such high frequency uses,” recalled Hu.

“I got to know Blackmagic Design when I entered the TVC production field where DeckLink cards were really popular. DeckLink’s great functionalities, reliability and affordability have all been inherited by other Blackmagic products, allowing us to better serve our clients with our own advanced live production workflows,” Hu concluded.