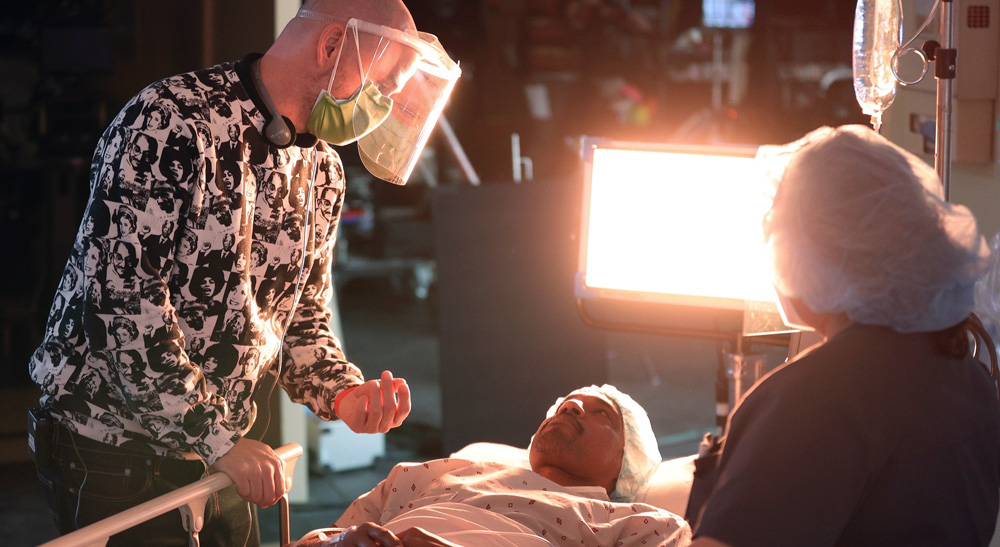 ABC’s “Station 19” follows a group of heroic firefighters from the Seattle Fire Department, exploring both the personal and professional lives of the team. In the episode titled “Comfortably Numb,” the character of Ben faces a health issue that requires surgery. While on the table in the operating room, the audience is brought into his experience during the procedure through a unique camera angle achieved with the URSA Mini Pro 12K.

Cinematographer Christian Sebaldt, ASC was determined to cover the scene in a unique way, providing a much more intimate and personal view of the character to capture his fear and anxiety. “We had three camera crews with our regular cameras on the ‘Station 19’ set,” said Sebaldt, “but I felt it was crucial to get an additional top angle for the editor, since visual effects were going to affect the scene quite heavily.” The added angle would cover the main character’s face as he laid on his back. “I didn’t want to take one of the three other cameras shooting the multiple actors in the scene and lose coverage on them, but I felt the single on Ben was critical to the story.”

A long time Blackmagic Design camera user, Sebaldt had used various models throughout his career, carrying many of them in his personal gear kit on each project. He started using the original Blackmagic Cinema Camera cameras on the CBS TV series “Rush Hour” in 2016. “With a huge amount of action in every episode, having two extra angles in addition to the three main cameras was absolutely crucial to deliver exciting sequences.”

“I’ve more recently used the Pocket 4K and Pocket 6K cameras, as well as the URSA Mini Pro 4.6K on many recent network TV episodes. I have seen them inter cutting with many other very high quality cameras without issue. I also used the URSA Mini Pro 12K on the visual effects heavy feature film ‘Reagan’ (to be theatrically released next year), which gave me the experience and confidence to get important coverage without sacrificing quality within a scene. And matching a Blackmagic image to other cameras has never been a challenge.”

Sebaldt rigged the URSA Mini Pro 12K overhead, focused on the actor’s face, but framed with ample room around him. “With such high resolution imagery, I knew that we could push in on the shot in editorial, and reframe if needed due to the high quality of the 12K image. A lock off with a moving actor was no worry for me.”

Beyond the high resolution, Sebaldt appreciates the image quality the 12K has to offer. “I get a clean image and wide dynamic range, with lots of natural detail, and no artifacts of any kind,” said Sebaldt. “All Blackmagic cameras I have used over the years have rendered beautiful skin tones and deep detail for easy matching or manipulation in final color sessions. For me technical data about a camera are secondary. What I want to know is are the images pleasing, do they match what I see with my eye, do they hold detail in deep shadows and bright skies, can I easily manipulate the look in camera for certain effects without artifacts, are the images clean to not require manipulation or repairs in post? These are some of the requirements I have when choosing my cameras. And with Blackmagic I can always answer yes.”