Continuing its work for The E.W. Scripps Company, the studio creates a sonic identity designed to win the hearts of  viewers across one of the country’s most diverse states.

DALLAS— Stephen Arnold Music tapped into the diversity, spirit and dynamism of the Sunshine State in creating sonic branding for Florida 24 Network, the newly-launched statewide news network from The E.W. Scripps Company. The studio delivered a flexible, multifaceted sonic branding package for use in show opens, IDs, promos and other media. 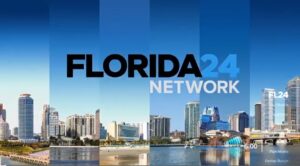 The Florida 24 Network launched in June through the collective efforts of the Scripps stations in the Miami, Tampa, West Palm Beach, Tallahassee and Fort Myers markets. It is available to viewers on streaming platforms including Roku, Amazon Fire TV, Apple TV, Android TV, and over the air in West Palm on WHDT Channel 9 and WFTX Fox 4 in Fort Myers.

Sonic branding can convey emotions and values that are difficult to express in words. Stephen Arnold Music Vice President and Creative Director Chad Cook notes that Florida 24 Network’s sonic identity evokes the state’s diverse population in a subliminal way. “It feels like Florida,” he says. “It’s rooted in a rhythmic approach inspired by different musical genres prevalent in Florida, including pop, Latin and Cuban.”

As Florida 24 Network can be accessed by viewers both via over-the-air (OTA) television and various OTT devices, the music and audio needed to translate to all platforms. “The sound is very clean and uncluttered,” observes Cook. “It works across different devices and in different listening environments. It sounds good whether you hear it through a phone, an iPad or a traditional linear display.”

Borek says the sonic branding is already drawing a positive response and has helped the new network get off to a great start. “We’ve designed the look, feel and sound of the network to fit our audience— whether they are cord cutters who are streaming us over the internet, or traditionalists watching over the air,” he explains. “The network is on the platforms our consumers are and it covers the important stories worth caring about.”