MEXICO CITY, JUNE 20, 2016 — Switronix, a leader in battery and charging solutions for the Digital Cinema and Professional Video industry, will be featuring the Hypercore SLIM and Hypercore Prime, the latest additions to its award-winning Hypercore battery series, at Telemundo’s Gran Cine Video Expo TV XXIV at the Zacuto booth (Booth E-4). The VoltBridge battery monitoring platform, now available for iOS and Android, and the Hypercine X Lithium Ion (Li-Ion) block battery unit will also be highlighted at the show.

“We are thrilled to be able to bring our innovative and most recent additions to our award-winning Hypercore series of battery packs to Telemundo’s Gran Cine Expo,” says Jose Flores, Sales Manager, Switronix, Inc. “We have always been dedicated to providing the best power solutions to the industry and these state-of-the-art products are further proof of our pledge. We invite all conference goers to receive demonstrations of our pioneering batteries and software.” 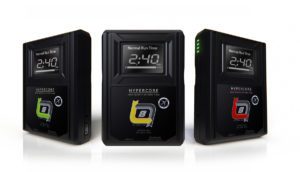 Switronix’s Hypercore Prime employs a unique two-part system providing a higher-capacity, air-travel-friendly battery solution that allows it to be legally transported without restrictions under IATA, ICAO and UN regulations. With this design, the battery separates into two 95Wh (watt hour) pieces for legal transportation. In usage, the parts assemble back together, creating a higher capacity that results in a wider discharge-cycle range and greater runtimes. As a result, the battery pack can sustain larger power draws, easily handling digital cinema cameras like the ARRI Alexa and Amira, RED Epic, Sony F65 and Phantom. In addition, when four Hypercore Prime packs are used with Switronix’s Hypercine system, the block battery alternative can provide 760Wh of air-travel-safe Lithium Ion (Li-Ion) power. Beyond the two-part system, the Prime battery pack is also scaled vertically to better distribute weight across the battery mount, reducing depth by one-half inch versus the older 190Wh model. Other features include a large backlit Runtime LCD and an LED grid that wraps around to the front of the battery to indicate charge status. The Hypercore Prime is available in V-mount and 3-Stud mount versions. 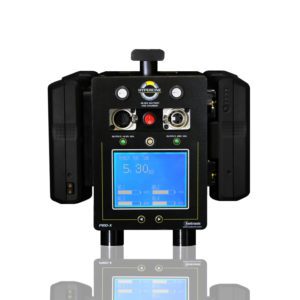 The Hypercore SLIM is the first line of slim battery packs capable of handling high-draw loads, making them ideal for UAV, Handheld Gimbal and all other applications demanding a low-profile battery pack. Even with this SLIM design, they are capable of powering RED, ARRI Mini Alexa and similar digital cameras, handling draws of up to 148Wh (10A) without deterioration in service life or operability. The battery’s cells are also incased in an over-molded, rubberized housing, providing additional protection against accidental impacts that may occur when operating alongside UAVs. Recently introduced is the addition of an LED backlit Runtime LCD, up until now only standard on Hypercore models 98Wh and higher. The addition of a large, backlit Runtime LCD on the front of the SLIM battery pack lets users know how much battery time is left when in use and will also show remaining charge time while connected to a charger. Like the Hypercore Prime, this 82Wh battery pack is safe and legal for air travel. The Hypercore Slim is available in V-mount, 3-Stud mount and V-mount RED to communicate exact remaining battery capacity to the RED cameras LCD/VF.

As members of the Hypercore series, the Prime and SLIM are outfitted with an accelerometer to detect motion. This causes the battery packs to hibernate when there is no usage or movement after a 48-hour period. Once the battery is back in use or detects the slightest movement, it awakens at its maximum capacity. As with all Switronix battery offerings, each battery in the Hypercore series has an integrated P-tap connection on its side that lets users power any 12-volt DC device. The Hypercore battery packs are also the most charger-compatible in the industry today. Not only do they charge on any charger within the Switronix line-up, but the V-mount offerings will charge seamlessly on RED, IDX and Sony chargers as well, and the 3-Stud offerings will charge on Anton/Bauer chargers firmware V3.6 and up.

Also on display at Gran Cine will be Switronix’s Hypercine X, which transforms its award-winning Hypercore series of battery packs into a “block” battery form. The Hypercine X supports the film and digital cinema markets by offering both 14.4V and 28V power outputs. Leveraging its high draw Hypercore battery technology, Switronix is able to provide a device that allows the user to place four 3-Stud brick battery packs within the device housing, transforming it into one single unit while also offering simultaneous built-in charging. With four Hypercore 98Wh batteries installed, the Hypercine X provides 392Wh and approximately four to eight hours of runtime.

Switronix’s new VoltBridge wireless battery monitoring platform is an iOS/Android app that utilizes Bluetooth Low Energy to transmit smart battery data to iOS/Android devices, allowing the user to monitor and set low battery warnings via push notifications on up to 25 devices. Users will be able to set three unique warning levels based on voltage, percentage, or runtime, allowing them to easily monitor the status of their batteries in use. The technology will also be offered in powertap BLE dongle form, as well as 4-pin XLR, enabling any device or battery to transmit power data to the VoltBridge app.

Switronix is a leader in the market of batteries and charging solutions for the Digital Cinema and the Professional Video industry. The company strives to continue to reinvent itself with innovative power solutions with a product line that also includes LED lighting, power-regulation cables- and accessories. For more information about Switronix, please visit www.switronix.com