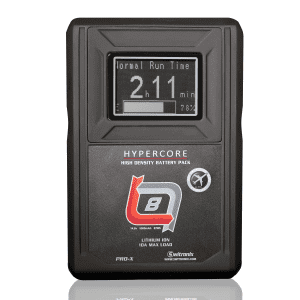 Las Vegas, APRIL 14, 2016 — Switronix, a leader in battery and charging solutions for the Digital Cinema and Professional Video industry, is proud to unveil its new Hypercore SLIM HC8 Lithium Ion battery packs at The 2016 NAB Show (Booth C10248). The SLIM battery packs are now equipped with an LED backlit runtime LCD, up until now only standard on Hypercore models 98Wh and higher. A member of the Hypercore series, the HC8 is a next generation, low-profile battery pack capable of handling high draw loads, perfect for powering cameras, such as REDTM, ARRITM Mini Alexa, etc.

Utilizing Switronix’s award-winning Hypercore technology, the Hypercore SLIM series was developed to provide the best in Lithium Ion technology for UAV, handheld gimbal and all other applications demanding a low-profile, light weight battery pack. The latest version of the SLIM includes the addition of a large, backlit runtime LCD on the front of the battery pack. The LCD lets users know how much battery time is left when in use, and will also show remaining charge time while connected to a charger. The battery cells are incased in an over-molded, rubberized housing, providing additional protection against accidental impacts. Targeting the ever-growing Drone market, Switronix built a 14.8V slim battery capable of handling draws of up to 148Wh without any deterioration in service life or operability.

“On any production, whether it be employing drones or a straightforward handheld application, knowing your battery runtime can be critical to getting that shot or missing it,” says Jose Flores, Sales Manager, Switronix, Inc. “With the addition of our backlit runtime LCD to our Hypercore Slim, users have a very clear graphical readout of runtime, helping them to make the most informed decisions when it comes to their power needs.” 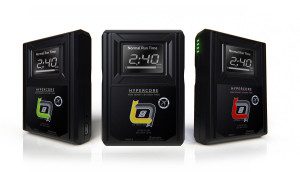 The latest version of the Hypercore SLIM comes in three models, the HC-8S V-mount battery, HC-8R V-mount (which communicates with RED cameras delivering the exact percentage of remaining capacity to the camera’s VF/LCD) and the HC-8AG 3-stud mount. All models charge on Switronix chargers, however the 8S and 8R will also charge on IDXTM, SonyTM and REDTM chargers and the 8AG will charge on Anton/BauerTM chargers. Their ability to power on multiple chargers makes them the most compatible batteries in the industry.

The Hypercore SLIM, like the rest of the Hypercore line, is outfitted with an accelerometer to detect motion. One of the issues with other battery packs is self-discharge when not in use. The Hypercore SLIM avoids this issue using a clocking algorithm, which is tied to the accelerometer to gauge how long the battery is not in use. The battery pack will hibernate when there is no battery usage or movement for 48 hours. Once the camera is put to use again, the battery will detect the movement and ‘awaken,’ coming back to maximum capacity and power. The Hypercore family also offers an integrated P-tap connection on the side of the battery allowing users to power any 12vdc device.

Switronix is a leader in the market of batteries and charging solutions for the Digital Cinema and the Professional Video industry. The company strives to continue to reinvent itself with innovative power solutions with a product line that also includes LED lighting, power regulation cables, and accessories. For more information about Switronix, please visit www.switronix.com