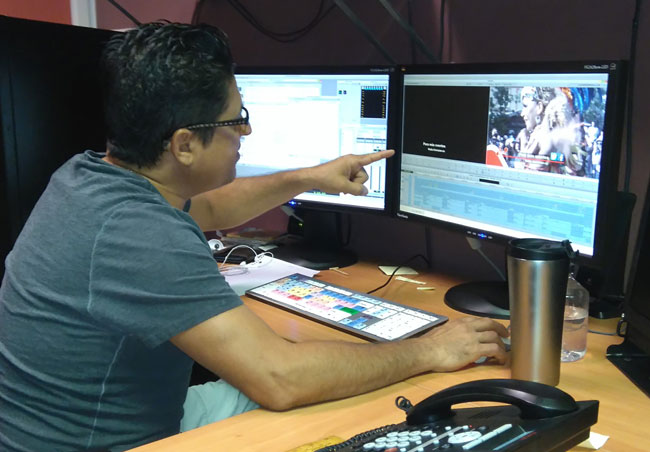 Based in Toronto, Ontario, TLN, is a general interest service that broadcasts a wide variety of domestic and international programming including drama, variety, lifestyle, news and sports. Over the years, TLN has evolved from its origins as an Italian and Spanish language channel, to appeal to a wider segment of Canadians with an English language stream of culturally connected programming. TLN also develops and produces a wide variety of TV and digital media productions which are distributed in Canada on its own TV channels, and worldwide on online platforms and to third parties.

TLN has a large studio and control room where they create shows, promos, and some commercials in-house. The post-production department is based around Avid Media Composer editing suites connected to Facilis TerraBlock shared storage.

“We’ve had our Facilis systems for over 10 years. Before that, our Avid systems were all using standalone storage, so sharing projects and media involved a lot of time consuming copying and physical moving of disks,” said Gherman Trushin, Chief Engineer at the Telelatino Network. “Our very first TerraBlock system was only 4TB, but that was when we were still SD and working at offline resolutions, so it worked well for us for some time.”

When TLN switched to HD six years ago, they knew they needed more storage capacity. They purchased another TerraBlock at that time since editors were consuming the space very fast. Two years ago, they purchased an additional chassis with 24 terabytes of storage for the editing team. Over the years, there had been a collection of different storage systems in use at TLN from different brands being used for various functions. Having different storage systems in the facility was inconvenient, as it required operators to move media between storage chassis. This not only took extra time, but also impacted the network bandwidth with so much traffic flowing in and out of the various systems.

With the success of the Facilis systems in post-production, and the need to replace a discontinued MediaGrid storage system, Gherman and his colleagues decided to standardize on Facilis as their main storage platform for both production and post-production. Gherman contacted Don Kinzinger at Dynamix, a local Facilis reseller in Toronto, and TLN added a new 192 TB chassis to their existing TerraBlock servers a few months ago. Now, TLN has a large central, unified storage network for the whole facility which saves transfer time and has reduced their overall network traffic.

Originally, the connection between shared storage and workstations utilized 4GB/s Fibre Channel, but with the latest upgrades, the facility has now switched to 10gig Ethernet for all systems. “All of our edit stations were fitted with 10gig cards, and the speed increased 4x which was really incredible,” says Gherman. “The fact that all of our Facilis systems are happy to work with either Ethernet or Fibre Channel is a great benefit.”

For administration, Gherman is happy to manage that himself. “Our creative people are quite busy, and they prefer not to touch the hardware and concentrate instead on storytelling,” he said. “I’m happy to manage and administrate for the team, since it takes very little effort on my part, and helps me keep a watchful eye on the process to ensure it runs smoothly.”

Currently, TLN has five Avid suites connected to the TerraBlock, plus two seats running CAT DV for archiving of material, and another seat for general purpose administration needs.  Having worked with other storage systems that require a great deal of knowledge and understanding of Linux, Gherman appreciates the ease of administration when creating, deleting or resizing volumes on a TerraBlock server.

“From our point of view, Facilis represents the perfect combination of price, quality and reliability. It just keeps running and running, day after day, and we like that we don’t have to worry about our storage,” he concludes.