Automates the creation of animated titles, slates, and graphical elements as part of a Vantage Post Producer iterative content workflow 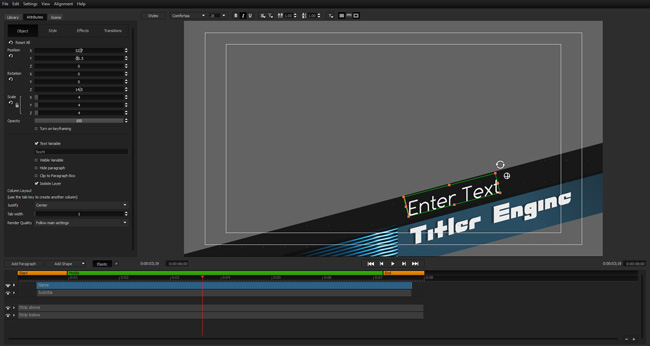 The creation of hundreds of regional variations required for national spots can be a daunting and expensive task and is frequently referred to as bagging and tagging by any editor unlucky enough to be asked to do it. Telestream’s Post Producer Titler Engine automates the creation of these numerous assets, inserting appropriate local content and outputting unique versions, often numbering in the hundreds without any human intervention.

“The Post Producer Titler Engine does for file-based content creation what broadcast titling systems do for live over-the-air broadcasts,” said Paul Turner, Vice President of Enterprise Product Management at Telestream. “However, in the world of multi-platform distribution, automation not only drastically speeds up what was previously a tedious process, but it also reduces the possibility of error significantly.”

With the new Titler Engine running in Post Producer, a new level of title quality, style, and variation is available to this automated process. NewBlueFX, a leader in title creation software, provides easy to use editing tools that can save title templates that are then fed into the Titler Engine to leverage complete control of color, animations, fonts and positional data. Titler Engine utilizes metadata to create dozens or even hundreds of full resolution, animated text-overlay, partial or full-screen elements that are assembled in a dynamic fashion as part of a Vantage Post Producer automation workflow.

With Post Producer Titler Engine, editors and other personnel can submit an Excel CSV file that may contain hundreds of text variations, into a Vantage workflow, and sit back and watch Post Producer create individual files for each iteration, and deliver them for playout or for use in other Vantage workflows.

“Using NewBlue’s TitleFX API, NewBlue and Telestream’s engineers were able to seamlessly integrate dynamic 3D animated titling into the sophisticated Vantage automation platform with very little effort,” said Todor Fay, NewBlue, Inc.’s CEO and co-founder. “Being able to automate title creation on this scale, and at this quality, will save customers tremendous amounts of labor and associated costs.”

Title templates are created with the NewBlueFX Titler Pro title editing software, which is available as a plug-in for popular non-linear editors, like Adobe Premiere CC and Avid Media Composer, or as a multi-platform standalone editing tool. The high resolution, sophisticated motion graphics created by Titler Pro’s easy and intuitive interface ensure a consistent design, look and feel whether the title originates in the edit suite or via Vantage Post Producer’s automated output of hundreds of regional variations.

The Titler Pro design tool is available from NewBlueFX from the following website: www.newbluefx.com/titling