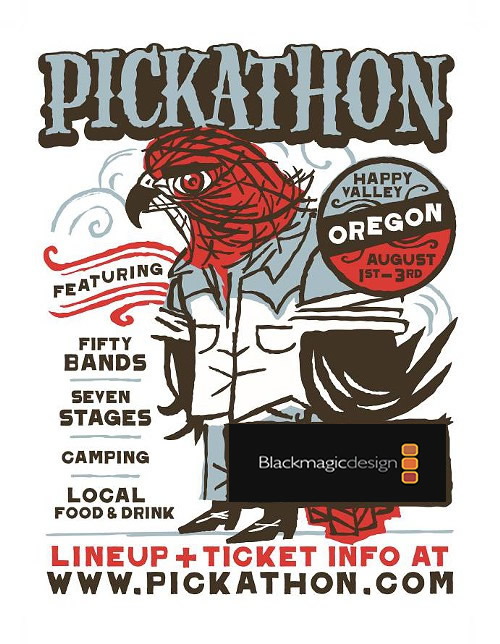 Several stages were set-up to avoid crowding.  With multiple stages (2 of which were main stages), the acts rotated around, each playing at least twice to minimize the chance of a potential fan missing their act.

Ryan Stiles, the veteran producer of this venture, coordinating a crew of 68 staff as well as 223 volunteers, knows quality equipment when he sees it. Doubtless that’s why he chose Blackmagic Design products as the key equipment for Pickathon.

“The ATEM switchers allow Pickathon to accomplish tasks that would otherwise be impossible,” states Stiles. “We needed stability and a universal system that’s the same no matter what stage the directors are at. The simplicity and ease of use of the software and control over the network is an all around win for us.”

Each show was a study in originality; one of the shows had a stage completely composed of local tree branches! In keeping with this ideal of originality, highly adaptable equipment was of course needed. Blackmagic Design was up to the challenge.

“The importance of using it cannot be stressed enough,” Stiles explained. “One of Pickathon’s challenges is that we are not a crew during the year. We come from all different types of employment in the industry, and I need everyone to understand the equipment within a five minute period so they can focus on our aesthetic rather than fuss with technology. The ATEM switchers and Studio Cameras allow us to do just that.” Utilizing a Blackmagic M/E Production Switcher, and three ATEM Television Studio switchers allowed the crew the flexibility and ease of use that facilitated a smooth workflow. This let the crew, along with the 223 volunteers, maximize and showcase the talent in the end, producing 44 hours of live feed. This feed was delivered to a global internet audience via a combination of the music festivals and local radio station KEXP’s websites. The efforts of the artists, technicians, producers, and volunteers were well spent sharing the music with thousands upon thousands of listeners both locally and worldwide.

Placed strategically near the main, a 57 foot broadcast truck contained an ATEM 1 M/E Production Studio 4K and an ATEM 1 M/E Broadcast Panel. This was the eye of a maelstrom of live production that produced a beautiful storm of music heard worldwide. The switcher combined with 3 computers channeled all the stage’s feeds, hence providing the carefully edited content.

The Blackmagic Studio Camera HD was used for this live production. It boasts a 10” viewfinder (This high resolution screen with sunshade for optimal viewing allows the operator to make subtle adjustments for the best picture even while streaming live), MFT lens mount (for extra flexibility, lens options, and multiple mounting points), support for up to 1080p60 (love those pixels!), 4+ hour battery (allowing just a single bi-directional fiber optic cable tethering the operator to production, instead of messing with power cords too), Talkback (allowing better co-ordination between operator and producer), illuminated tally, an integrated control panel, internal or external microphones. You get the picture; it’s an ultra-spiffy camera.

“When putting together the production for this year, I knew we needed to use the Blackmagic Studio Cameras because of their functionality and mobility, perfect for live production,” said Stiles. “When shooting live, menus inside of menus are not an option, and the Studio Camera’s easy access to camera options is amazing. And the two color settings worked out great. We shot flat for post editing color grading and then switched over to video for richer tones when streaming live.”  3,800 feet of bi-directional fiber optic cable was used between the production truck and the stages, this is only a tiny fraction of the cable length usable with this Blackmagic equipment while still providing a superb picture and data. “By the end of the first day, our senior camera operators had nothing but praise for the Studio Cameras,” Stiles proudly stated.  “I would say that the Studio Camera is the future of multi-camera live production.”

At this point, the veteran producer certainly has this festival down cold. He has been producing the Pickathon Music Festival for many of the current productions in the Show’s sixteen year lifespan. “I’ve been producing the festival for the last six years, and each year we try to make the production better for festival goers and online viewers. It’s why we rely on Blackmagic Design for much of our live production and streaming workflows.” Large and small details have, for the most part, been discovered. Each new location will, of course, initially present a few challenges. Seasoned professionals and excellent equipment can neatly plow under most problems & challenges.

The Pendarvis Farm (the August location) also had some private sessions with the musicians called “On the Farm.” The sessions were streamed and will be released throughout 2015. The camera used for these sessions was a Blackmagic Design Production Camera 4K. This top flight camera has a Super 35 Sensor with Global Shutter (allowing for picture perfect panning while helping to avoid those pesky rolling shutter artifacts), a Canon EF Lens Mount (allowing utilization of a broad range of Canon‘s EF lenses – or a Zeiss ZE lenses or a third party EF mount lenses). Also, Ultra HD 4K and 1080HD ProRes Recording (Ultra HD 4K (3840×2160) and 1080p using the ProRes 422 family of codecs (HQ, 422, LT, Proxy). A gigantic 3840 x 2160 pixel arrangement allows 4X the resolution of 1080p. Did I mention the 6G-SDI output? It’s very helpful in a live production like Pickathon. CinemaDNG RAW Recording (allowing magnificently malleable versatility in post-production is yet another feature. RAW records in 4000×2160 resolution, essentially making each pixel a sensor). A Built-in SSD Recorder (The 2.5″ SSD is removable & you can playback directly from the camera if As music festivals go, Pickathon is that rare bird that seeks to please the audience and the performers, not just the investors; the goal seems to be about the experience, and maintaining sustainability. The promoters pick beautiful locations, and they have the decency to make sure they stay that way. The site is kept very clean, with an eye firmly on ecology. Styrofoam? Forget it! Plastic cups have likewise been banned, and plastic water bottles suffered a similar fate.  Kleen Kanteen, a longtime sponsor of the event, has the answer for beverage delivery. Stainless steel cups – with a variety of little accessories available to make cleaning and storing your cup easier. Cleaning stations were even spread about the site at various locations. OK, so that’s the answer for drinks – but what about food trash?

Plates and wrappers, plastic utensils and what-not? In a word, the answer to this is: Uhh… NO! (Ok, that’s 2 words, but you know what I mean). How was food handled then? With a Utensil & plate meal token, of course! At the start of the festival you buy the token. Each vendor will trade your token for eating utensils appropriate to the food they sell. When you finish your repast, you bring back the bowls and spoons (or plates and forks) and the vendor will give you another token. All the dining implements are made of Sturdy Bamboo, and each vendor cleans them when customers return them.  Wow! Hardly any trash! It was family-friendly, too (unlike some festivals)… Children under 12 got in free. A lot of the attendees camped-out at the August concert site. Car traffic was kept to a minimum by using buses and bicycles.

The musical acts, producer Ryan Stiles and his crew of 68 and the 223 volunteers, Quality musical instruments, a plethora of Blackmagic products and KEXP Radio all combined to make Pickathon a rousing success. This link takes you to a series of you tube Pickathon videos: www.youtube.com/watch?v=KiJt4XSgMoA&list=PLOibpJxM55Fif1xQITEwa_XLCjlWAh564