The 12-days of Studio Christmas

On the 1st day of Christmas, the producer bought for me: PrimeTime’s GUS 41 LED Fresnel

PrimeTime’s Lighting Systems the GUS 41 LED Fresnel, is the spotlight to illuminate your talent or subjects; its light-wash adjustable from 11° on full spotlight to 80° at Full Flood. With high-power light generated at minimal energy expenditure, the GUS 41 LED Fresnel has a 50,000 hour lifetime. This sturdy and brilliant light comes in 3 models: 3000K, 5000K, or the CRI 90.

On the 2nd day of Christmas, the producer bought for me: Panavision’s Primo Prime Lenses

Panavision’s Primo Prime Lenses are a beautiful collection of top-of-the-line camera lenses that produce even-lighting, enabling a totally seamless mixing of other images that also use the Primo lens. From soft focus to the sharpest of high contrast images, these lenses capture it all. Ideal for digital and film cameras, ghosting, distortion and veiling glare are things of the past. Focal length ranges from 10 to 150 millimeters and any of these lenses is compatible with the 1.4x Primo Extender, which eliminates a full stop of exposure. 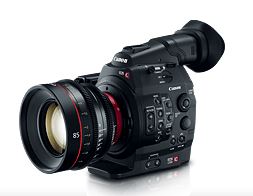 On the 3rd day of Christmas, the producer bought for me: The Canon EOS C500 4K Camera

On the 4th day of Christmas, the producer bought for me: Riedel’s STX-200

Working with Microsoft Licensing, Riedel has produced this truly innovative solution in a single box. Let’s take a look at Riedel’s STX-200. This allows users to add/use Skype, and gives all-around access to radically increased content and workflow potentials using this professional-grade broadcast interface which opens new vistas of interaction. Gain access to a much larger audience with Riedel’s STX-200, and go from one end of the DataStream

to the other and back again – Interaction with a capital I! Bring audio, data, and video to your studio or viewers in true time. Riedel’s STX-200 has broadcast-quality HD-SDI and balanced XLR audio I/Os, Gigabit Ethernet connection, a user-interface connection via HDMI, USB ports for accessories, and GPIs. A Larger audience promotes a larger cashflow.

On the 5th day of Christmas, the producer bought for me: Squarebox’s CatDV

Need to manage your precious digital content? You’ve come to the right place – CatDV is a powerful database with logging and transcoding tools. If you are filming something for a third party, CatDV makes it easy to keep track of what data belongs to whom. No mistakes equal less conflicts and less conflicts equals less costly production. CatDV is wonderful product for Digital Asset Management (DAM); it fulfills the requirements of large production houses and everything smaller. CatDV has continued to grow and evolve to meet the requirements of today’s DAM needs. For the most holiday fun, get the absolute latest version of the product – CatDV 11. It has the entire award-winning tasty goodness of the previous versions, but with improved, as well as new, features, too.

On the 6th day of Christmas, the producer bought for me: Broadcast Pix ReVue 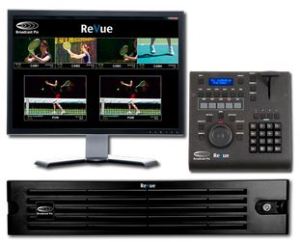 The Broadcast Pix ReVue is the sportscasters best friend – it can smoothly weave independent or integrated production systems or environments into a breathtaking multi-view celebration of sport’s great moments. Baseball, football, hockey, soccer – any sportscaster can assist the game to jump out of the screen and engage the viewer more fully with the assistance of that showcase of wonder – the Broadcast Pix ReVue. It helps you display the game-winning plays in all of their glory. Eight Terabytes (expandable to sixteen) of RAID 6 storage, eight tracks of imbedded audio are available, 1080p Playback and recording is available, and all are packed neatly into a 2RU chassis. 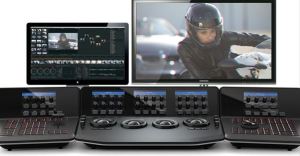 On the 7th day of Christmas, the producer bought for me: Blackmagic DaVinci Resolve 11

DaVinci Resolve 11 includes over 70 new editing features, including an amazing new collaborative workflow that permits multiple people to work together on the same timeline at the same time – Epic! The customizable keyboard shortcuts for quick effective editing, along with the automatic context sensitivity feature, determine how you want to trim, based on the position of the mouse – eliminating the time in having to switch between tools! DaVinci Resolve is scalable and supports up to 8 GPUs, giving them the power for a synergistic approach, all working together (as found in the new MacPro, as well as the latest Windows and Linux computers).

On the 8th day of Christmas, the producer bought for me: Decimator DMON-12S

On the 9th day of Christmas, the producer bought for me: Primestream’s Fork Production Suite

Primestream’s FORK Production Suite v4.6 is the latest version of this top-of-the-product-line offering. Edit with true creative freedom with its unsurpassed scalability and flexibility, free of the restrictions of purely linear editing. Unleash your inner artist and revel in the smooth workflow and enjoy the most powerful version of FORK ever released! Not only does this solution allow for new and different configurations, including major revisions to the primary architecture of FORK 4.5, The ability to control will have you in a state of euphoria! Just when you thought the FORK had reached its pinnacle, Primestream somehow improved it again!

On the 10th day of Christmas, the producer bought for me: a TBC Consoles TracWall

TBC Consoles TracWall is essentially a mobile monitor wall. Put your monitors where you want them! Don’t let some architect who designed your building 40 years ago decide for you! Stationary, sturdy, and stable, yet mobile enough to allow ready experimentation in the quest for the perfect workflow, the grid-pattern of slotted aluminum structure contains those unsightly wires (along with the base run in cabinets at the bottom of the structure) out of view and provides the necessary support for speakers or monitors clocks or other accessories; a broad mix of mounts are also available. The right assortment of speaker and console mounts can help you find your ideal configuration for this mobile monitor wall of walls. 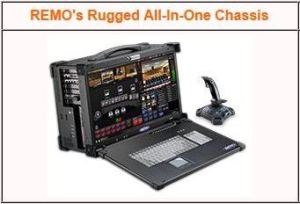 On the 11th day of Christmas, the producer bought for me: Rushworks REMO 22

The REMO 22 by Rushworks is a Channel-in-a-Box. This dozen-studio-machines-in-one can provide an effective studio for a startup company or an emergency or spare studio for an established company. These systems boast 4 or 8 HD/SD-SDI inputs – ISO capture of inputs is now available, as well, with format-able streaming and recording, Multi-layer DSK, Dual-Clip Players, Pip and Chroma Keys, full-motion overlays and the ability to perform easy transitions and effects. The REMO 22 boasts a 22-inch touch screen monitor and is small enough to fit in most carry-on luggage storage locations on standard commercial airlines.

On the 12th day of Xmas, the producer bought for me: Silverdraft’s Devil Unleashed 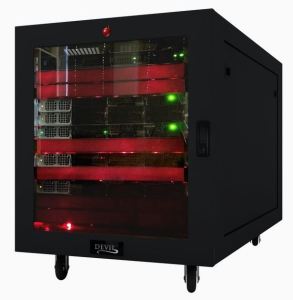 Silverdraft’s Devil Unleashed is the fastest ‘off the rack’ supercomputer available… it simply oozes computing power! 424 cores with hyper-threading, AMD W8000 GPU, 896 GB RAM, 7.2 TB SSD storage, and 24 AMD processors @ 2.5 GHz per processor, 2 Intel E5 processors @ 3 GHz per processor. Smaller and cheaper than you would have thought possible, yet almost unbelievably quick, the Devil Unleashed is the computer to have for your rendering and graphics work.

It’s an undisputable (and unscientific) fact that a happy and productive studio needs fabulous toys like these to be healthy and efficient. Happy Holidays to you and your studio this season. And don’t forget to look for Broadcast Beat Magazine in January, 2015! Remember to get “The Beat” – and stay blogged-in!