The Art of Blocking for Video Productions

Once when studying directing with the great New York drama teacher Wynn Handman, someone in the class asked the best way for a director to learn blocking. His answer was to spend a day in the Old Master’s room at New York City’s Metropolitan Museum of Art. All you’ll ever need to know about blocking is in those great paintings, Wynn told us. 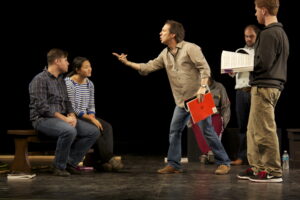 Blocking is an art form. It is a much harder task than many think. The writer conceives a scene and creates the dialogue. The actors learn their lines. All the technicians — camera, sound, lighting and others — execute their crafts to create the scene. But it is the director who has to bring all the elements together into a realistic and believable depiction of life on the screen.

Until I co-wrote a stage play a few years ago, I thought chorographers only worked on dance routines. What I learned in a very powerful way is choreographers are also experts at effective blocking. Actors, after all, can’t just stand in one place. They must move around in a coordinated way to make any scene work. It’s a bit like dance. Getting them to move well visually can be a challenging task.

Directors, often working alone and without a lot of rehearsal, must determine whether a character sits or stands with a good reason for the choice. In making this determination, screen direction must be tracked, which is often different from natural behavior in real life. Sometimes actions must be created for the characters that is not written in the script.

When directing the film, The Chalk Garden, director Ronald Neame recalled that the veteran actress Dame Edith Evans was unhappy when she was filming a scene where she had to simply sit in a static position and say her lines. Neame suggested that while speaking, she pick up her purse and rummage through it looking for a handkerchief.

She liked the idea, and told Neame, “yes, that will take the weight off the lines.” That little suggestion from the director, however instinctive, helped block a far more effective scene. 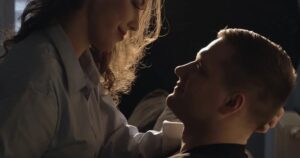 It is clear that directors of all types must have an artistic eye, just as a painter does. For this reason, they need to educate their eye for visual effect in their work. It’s the reason Wynn Handman sent budding directors to an art museum to study blocking.

One involves people talking, whether sitting at a table or standing. In real life, people tend to be an equal distance from one another when having conversations. When sitting at a round table, three people will normally face each other and take up a third of the space. However, when shooting a video of the scene, this means one person will always have his or her back to the camera.

In blocking such a scene, a good director will have the people sit together at the table in a semi-circle, or at a long counter. If they talk while standing, they might be filmed walking down a sidewalk or hallway in the same screen direction. This blocking manipulation is called cheating. The trick is to make the conversation look natural and while getting all the faces on camera

Another blocking issue is moving characters. When people have a genuine conversation, they are generally still — with little movement. In film or video, that, like the Edith Evans scene, is too static and dull. Do as Neame suggested, have the character perform some action while talking. In a kitchen scene, two people talking might be washing and putting away dishes. Again, the trick is to give each character a reason for their action.

Normally, the camera should see every face in a scene (of course, there are exceptions). In Westerns, cowboys often ride horses ride side-by-side when talking, even though this is not the normal way real rides occur. In crowds, people tend to group in bunches. This, however, would obscure their faces and look strange on camera. Blocking may reflect an artificial way of depicting human interaction, but it’s needed for effective camera placement.

Realistic lighting goes hand-in-hand with effective blocking. Light and shadow creates the mood of the scene and actors must stand in places where the light is targeted. 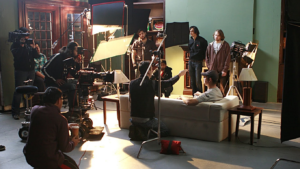 Say, the mood for a scene comes from a film noir set in a detective’s office in the 1930s. It is lit by a dim desk lamp with a bright neon sign flashing from the street behind a window. The detective meets a beautiful woman in the office. Through good blocking, the mood lighting is as important as the characters in the scene. This coordination of lighting and blocking doesn’t happen by accident.

Unless the director is a naturally gifted visual artist, blocking is a learned skill. To acquire this knowledge, directors should always pay attention to the blocking whenever watching television drama, feature films or stage plays. Observe the placement and motion of every character and determine the motivation behind it. How often is a character’s back shown? How do the actors get from one location to another and how do other characters react as they move about the set.

Even if a director is doing non-fiction television of live events, blocking is still important. If a performer is live on stage, there should be an “X” mark on the floor for their correct position. It’s the same even for weddings or other live events. People forget where to stand and lighting can be thrown off if they mistakenly stand in the wrong place. It is the director’s job to make sure it is easy for everyone to know their correct position.

For the audience, artistic blocking is a bit like a big dance number. Precise coordination is essential. If the project is too complex for a director, a choreographer should be hired. They can turn a static scene into magic.