The Challenges of Doing Voiceovers for Video 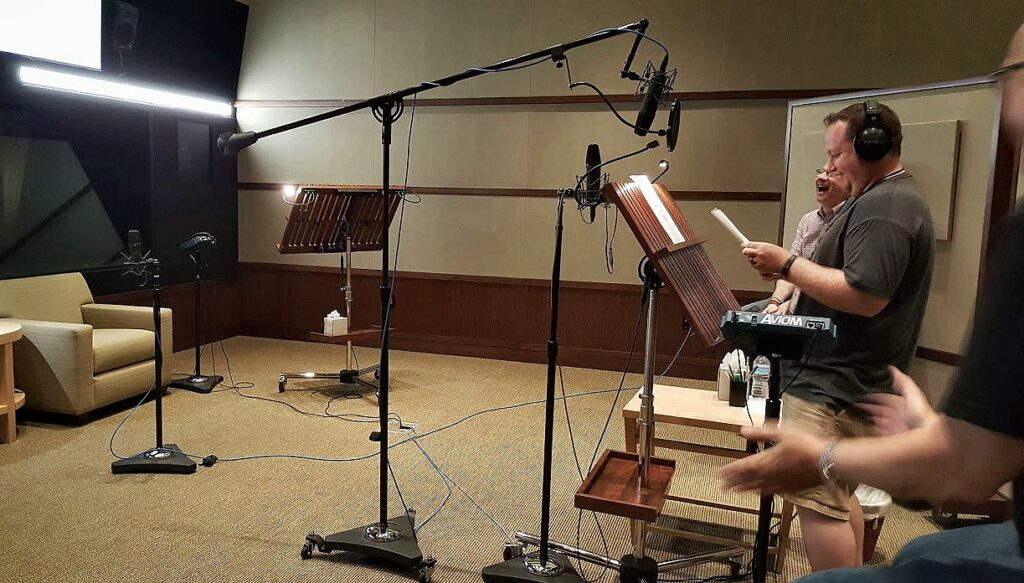 Recording an effective voiceover for a video production is far more demanding than simply having a narrator speak into a microphone. The fact is all voiceovers are difficult to record because each voice is unique.

There are no hard rules to get good results with voiceovers. It takes a combination of effective narration skills, engineering expertise, the right microphone in a good acoustical environment and a correctly set processing chain.

Any good voiceover must be recorded in an acoustically suitable space. Professional studios have voice booths designed for this purpose, but makeshift studios in offices and homes can be hit or miss. Before trying to record any voiceover, make sure the room sounds good.

Then make sure the voice artist and engineer are both familiar with the material being recorded. Rehearsal is essential. The written word can look fine when read on paper, but might be full of tongue twisters that trip up humans. Be sure the talent can say the words out loud in a natural way before even beginning to record. 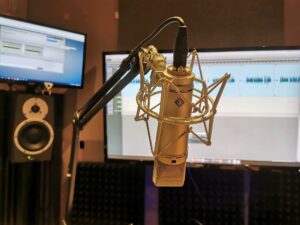 Rehearsal also serves as a warm-up session for the voice artist. When the narrator is comfortable and familiar with the material and setting, there will be fewer retakes. This can save a lot of time when the session begins.

Beyond the performance, the most difficult challenge of voiceovers is usually matching the individual artist’s voice with the studio’s recording chain. Since every human voice is different, experimentation with microphones and processing is essential for excellent sound.

Signal processors, including reverbs, equalizers and delays, are designed to make an obvious change in the sound and can be useful in voiceover work. But the most important tool is the compressor. When compression is used properly, listeners won’t be aware of it. Yet, it is essential in modern audio, including voiceovers.

A compressor/limiter is essentially an automatic volume control. Human voices fluctuate. The instant they get louder, a compressor pulls the level down faster than a human operator can. By using the threshold and ratio controls, the engineer can set a stable level that will hold its position in the mix whether the voice is high or low.

Knowledge of the recording tools is a good reason to work with professional voice artists. They know the mic-preamp combinations that sound best with their voice. Many even have that gear set-up in their home studios. Some voiceover artists will bring their preferred mic and preamps to a recording session. 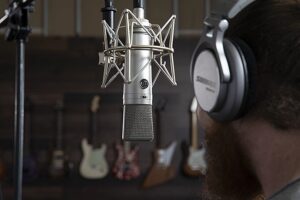 When working with less experienced narrators, don’t expect any help when it comes to the quality of the sound. It is all on the engineer’s back. It’s one reason well-equipped studios have such a wide selection of microphones for experimentation with different voice types.

A rich male voice can be totally different from a high-pitched female voice. Getting the best sound from voices is a bit like painting. The mic and the processing must be tweaked to get pleasing sonic characteristics from each voice.

In these circumstances, the cost of a mic doesn’t matter. A cheap mic often sounds better on a particular voice than a far more expensive mic. Among mics, there is an endless range of variations and pickup patterns. An experienced engineer usually recognizes a starting point for experimentation in a session.

Once a mic is selected, a matching mic preamp is an important choice. Preamps offer mics a sonic flavor – some are very colored and others totally uncolored. This is why experienced voiceover artists tend to know the preferred equipment to suit their voice.

Once the mic/preamp choice is made, good mic technique comes into the picture. The working distance from the mic is usually determined by the loudness and presence of the narrator’s voice. 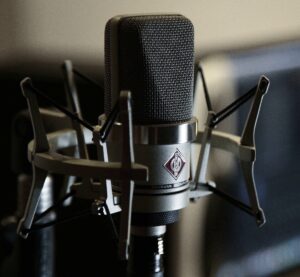 The angle of the mic can determine frequency. If the mic is placed below the mouth, higher frequencies that bounce off the roof of the mouth are often recorded, resulting in excessive high frequencies. Recording on-axis, on the other hand, can result in plosive sounds (“S” and “P”). This is often fixed using a pop-filter, which should always be used with voiceovers.

Narrators with broadcast experience often use proximity effect to boost the bass presence in their voice. This comes from working very close to the mic. This boomy broadcast sound has long been dubbed the “voice of God” effect. This may be OK for live broadcasting, but be careful of narrators who try this for voiceovers.

For a balanced, untainted tone in voiceovers, it is best to avoid the proximity effect altogether. There are alternative ways to increase bass frequencies once the recording is finished. For narration, it is best to work further away from the mic, which can help in the final mix.

Limit the talent’s movement when recording. It might be harder than you think for fidgety narrators, but it is important for mic placement. If necessary, place a piece of tape on the floor in front of the mic as a mark of where to stand. For sitting sessions, pay extra attention to the talent’s movements while recording.

Also, make sure the talent stays hydrated during the session. Have water handy, either hot or at room temperature. If the narrator’s mouth gets dry, it will generate smacks, clicks or pops during the recording. Know this and be prepared.

All good engineers know how important it is to develop a good rapport with any artist. This is especially true with voice talent and their engineer. When the narrator feels comfortable, it makes any session go smoother and faster. Developing people skills is just as important in voiceover work as in anything else.