The Collectv helps Too Hot to Handle keep cool 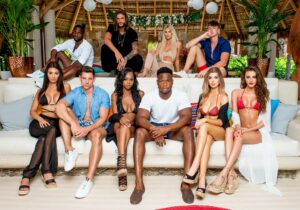 The Collectv, the London-based Emmy award-winning broadcast solutions and workflows consultancy, is pleased to announce that it played a key content securing role in the production of the Netflix hit reality dating series Too Hot to Handle season two, ensuring that multiple terabytes of data made it back safely to post production in London. Furthermore, it also set up new workflows on site to allow it to stream live content to various production bubbles to ensure Covid-safe workflows while on location.

Produced by Thames and Talkback (Fremantle labels), The Collectv also worked on season one of the show, filmed in Punta Mita, Mexico. This time the location was moved to the Turks & Caicos Islands in the Caribbean, with all cast, crew, and equipment transported to the filming location via charted plane; partly due to the remoteness of the location, partly because of potential transport problems caused by the pandemic.

The difficulties of producing high-profile international content such as Too Hot To Handle led to the decision to shoot seasons two and three concurrently. The individual series have grown in production complexity too, moving from eight streams to 10 streams, and with a second diary room added to allow contestant interviews to take place at the same time. Headline figures from the three-week long season two shoot include:

“The main difference with this season was undoubtedly Covid,” comments Chris Sarson, MD and co-owner at The Collectv. “Fitting all our people and equipment into a villa for what is effectively a 24/7 operation while keeping everyone Covid-safe with social distancing and frequent testing was a challenge.”

A new innovation this year saw The Collectv provide live streams from the production for the execs to view what was going on and be able to make filming decisions from remote locations. These were also established in case of any Covid restrictions to provide key members of the team the ability to keep working without having to venture on site.

Extra fibres were run into the villa where The Collectv was established to boost the connectivity up to 1Gb. This was required as The Collectv’s set-up was at the centre of a complex workflow including around 60 remote hothead cameras and a range of cabled end points away from the main villa provided by NEP, which was operating as host on the project. Along with the two fixed cameras in the diary rooms, these were all delivered from the gallery as 10 intercut ISOs to The Collectv, where they were recorded in 10-bit DNxHD185x.

“This makes it the best quality ever seen on a reality show,” says Sarson. “High-end cameras were also used at the cabled points, and for the directed tasks that the contestants undertake, to get that important shallow depth of field look.”

The high-resolution files were stored on near-line storage in two separate locations for security, with LTOs derived off the back of that. Proxy files were transcoded as DNxHD 36 and uploaded to Envy in London for offline. The Collectv team also oversaw sync pulls and sync matches and QC on Avid on-site, ensuring any problems could be fixed while the production was shooting.

Following the successful completion of the shoot at the end of last year, safety copies were brought back to London on different planes while the entire storage chassis was crated back to the UK and installed at Envy for an intensive post production process to begin in order to make today’s on-air date.

“All in all, it was a mammoth task that involved installing a lot of equipment in a remote location and running a high-end production for an entire month, including rehearsals, in baking heat all while the world was in the grip of a pandemic and the situation was changing almost every day,” says Sarson. “Everything needed to work perfectly to make the ambitious on-air date and, with a fantastic team on the ground as well as back in the UK, I’m delighted to say that it did.”