For the small budget adventure-thriller Nine Bullets, Director of Photography Byron Werner used Cooke Optics Anamorphic/i prime lenses to give him the scope he needed for the intimate nature of the film while elevating the look to that of a bigger budget project, all with the help of The Cooke Look®. 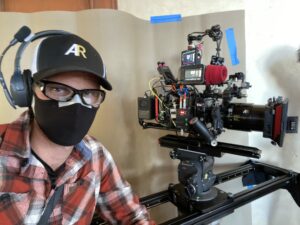 Nine Bullets tells the story of a burlesque dancer (Lena Headey) who must go on the run to save a neighbor (Dean Scott Vazquez) whose life is threatened by her ex-lover (Sam Worthington). With production in Los Angeles having restarted during the pandemic, there was a sense of urgency to get photography completed as quickly as possible, especially with Headey and Worthington having other commitments. That meant prep in October 2020, with shooting in November and December.

“Getting this job was really about knowing the right people who knew the right people,” said Werner. “My friend and first AD, Drew Rosenberg, who was also a co-producer on Nine Bullets, introduced me to [writer/director] Gigi Gaston.” Werner’s interview with Gaston was, as he tells it, “interesting”, due to all of the Covid restrictions.

“I’m used to in-person interviews, we all are, but Covid made that impossible,” said Werner. “Look books aren’t made for Zoom calls. It was a bit harder to really get the people on the other side of the call to see how I wanted to present the story based on my reading of the script and any additional information that I was given. But it worked. Once I had the gig, Gigi would send me images and film titles, and we would prep remotely with me in Pennsylvania and her in LA, talking on the phone.” 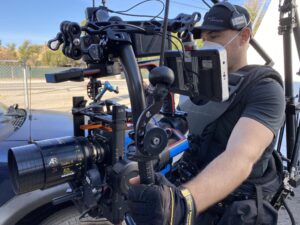 While a number of factors go into the look of a film, Werner’s main factor was budget. “I didn’t want to create something too big for the money or the time we had — that time was needed for the performances, not setting and striking lights. I designed a very natural look — with interior lighting from windows and practicals while flipping that for exterior shots with the hard sun, backlighting whenever I could. And time was a major factor. Over 19 days, we shot 113 pages with 208 scenes…which was crazy!”

Werner saw the script as a modern-day western, using Hell or High Water (2016) as a reference. “I tried to shoot it that way — westerns go outside in the middle of the desert and shoot. That’s also where anamorphic 2.39 came in, with Hell and High Water having been shot for CinemaScope’s 2.55. And that anamorphic would come from Cooke.

“When we were inside and I had to go wide, that’s where the Cookes really shine. How they render faces and how the background just falls without any weird bending, no matter where you are in the frame or which lens you’re using.”

Werner has always been a Cooke fan. “After I graduated in 1998, I shot movies like crazy on film to ‘pay my dues.’ And while I wasn’t the one picking the lenses, I got to work with a lot of S4/i lenses, and I really liked the look. That Cooke Look™, as it is now called, was — and still is — everything. On Nine Bullets, with the Anamorphic/i primes, I had a lens range that’s nice, warm and everything is sharp. They just look really good.”

Having used Cooke Anamorphic/i primes on another project just before Nine Bullets, Werner didn’t see any need to do tests. “It was an easy sell for Gigi. She was back and forth on anamorphic until we talked about how spherical lenses wouldn’t give her the look she was after. With anamorphic, we could really get a more intimate feel and separate the characters from the background, especially since this is a story about character relationships. She trusted me. And I trusted Cooke Anamorphic/i lenses to give me the scope I needed for the intimate nature of the film.”

Werner’s kit consisted of two ARRI ALEXA Mini cameras which were used all the time and a set of Cooke Anamorphic/i standard coated primes (25mm, 32mm, 40mm, 50mm, 75mm, and 100mm, with a 135mm for the final week of production) all from Alternative Rentals in Los Angeles. One camera was always on sticks or a dolly slider, while the other was on a Cinema Devices Antigravity with a DJI Ronin 2 stabilized head. 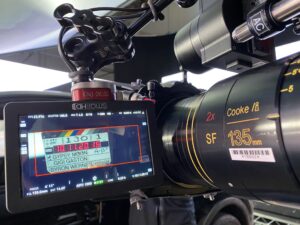 “While I used every lens in the kit, I primarily had the 50mm on the Antigravity and the 100mm on the second camera,” said Werner. “I did use the 25mm, although sparingly — but it was great to go that wide in anamorphic. The Cookes are just such well-built lenses. You can shoot almost closed to wide open, and even at 2.8 you’re not in trouble. The image always stays sharp, with minimal bend on the outside. They have great fall-off, they’re mechanically great, the flare is great — Cooke is the closest thing to perfect. I just love them — and the Special Flare coating as well, which I used on my last project — but that would have been just too much, taking away from the aesthetics of Nine Bullets.”

Although a small budget film, Werner made use of the /i Technology lens metadata. “I had two operators and a DIT, who ran the iris, something I would normally do when working without a DIT. To just look up and see the metadata, especially the stop and the focus, is something I love. It’s especially useful when talking with the gaffer.”

The lenses also gave Werner some much-needed flexibility. “The fact that we could put any of the Anamorphic/i lenses on the Anti/Ronin was great. The Cookes are all about the same size, and certainly not the biggest in the industry. Being able to have those options with a gimbal was great for us. I didn’t even need a matte box most of the time, with nothing at all on the Ronin,” he said. “The Cookes are just beautiful and look so good. They definitely elevate a small-budget film. They’re so sharp and user friendly and with the /i Technology, it’s just one less thing you need to worry about technically.”